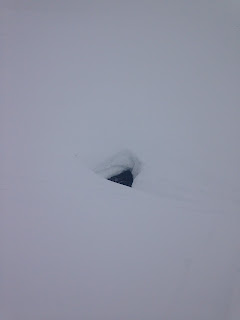 Imagine you are in the mountains,the weather is horrible,the visibility is at times zero, the avalanche risk is high. Wouldn't it be convenient if you could just escape inside the slope and get away from it all? Well in a nut-shell this is what we did: 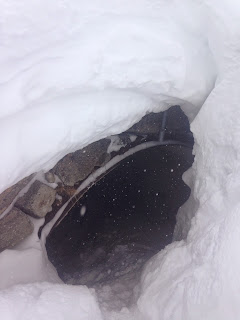 Needless to say this was only part of the adventure which Bill Mills Greg Knott and I had embarked on. The story started on the Saturday morning where we took the mountain train from Grindelwald, through the Eiger before disembarking at the Jungfraujoch station. We stuck our skins on our skis and headed up to the Monchjoch. From there we skied down the very long and flat Emig glacier underneath the Fiescherhorn. It was bitterly cold, yet wild and spectacular - we could just as easily have been in the Antarctic. 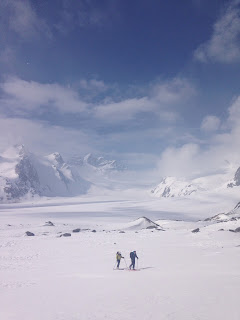 Finally the glacier steepened as we skied off the toe of it and joined the main Jungfrau glacier and soon arrived at the steps to the Konkordia Hut. These steps provide no finer example of glacial retreat and global warming because , when the hut was built it was at the edge of the glacier.Its now a lung busting 200 meter vertical ascent. 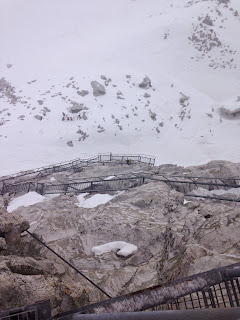 The Hut wasn't busy just another team of 4 French with their Guide Nicolas from St Gervais.

The next day[Sunday] the weather was cloudy and it was snowing lightly , yet there were holes in the clouds so we decided to head over the Finsteraahorn Hut. Roughly after 2 and half hours of steady ascent we arrived at the col. We skied down the other side and into thick mist. You couldn't even see your feet. Finding the Hut perched on the other side of the moraine was a navigational challenge.

The hut wasn't busy - just the French team and us.

Monday the weather was bad. Not a great amount of snow but still the visibility was poor. The forecast wasn't good for the next 2 days. The problem with the location of the Finsterahorn Hut is that it is remote and there is a real chance of getting stuck there if the weather deterioratesand it snows a lot. So we decided to get out while we could and head back to the Konkordia Hut.

The hut wasnn't busy- just us . The guardian cooked us a giant pan of Rosti Cholesterol 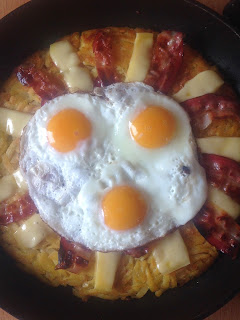 Eventually another Guide from Romanche arrived and we all huddled around the fire in the Kitchen.

Tuesday: We needed to leave - Bill and Greg needed to get home. Still the weather was poor After much debate we decided we would ski down the longest glacier in western Europe the Aletch glacier, with the aim of getting to Fiesch.

Again this is utterly spectacular and wild but it was not long before the weather socked in again and it became necessary to ski roped up in case I inadvertently skied into a crevasse because I could not see a thing. We navigated our way off the glacier and headed up a valley to where we had been tipped off that there was a secret tunnel. 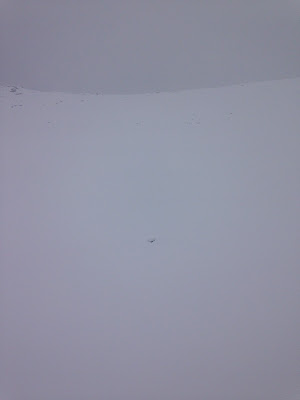 The tunnel was not easy to find , but find it we did and there was s sense of job well done.

The tunnel was about 1200 meters long. I dug out my head torch and lead off while Bill &Greg followed. In the middle of the tunnel we came across a weird shrine with lots of burnt out candles. I couldn't see any sacrificial body parts lying around but there again it was very dark.

We exited through a door into the next valley 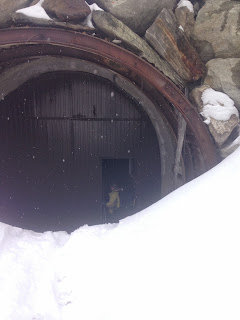 We put our skis on and skied the best snow of the trip down a beautiful valley before making a critical right turn up what in the summer would have been a simple path , but in the current conditions was a precipitous traverse above a big cliff. Still there was a track made by other skiers so how hard could it be?

Well it was a few minutes later that we rounded the next corner to come face to face with the two men who had made the track. One of them, seemingly the "fuhrer" was shouting into his phone. It transpired that he was in the frantic process of calling for a helicopter because he and his friend and decided to go on an off-piste "explore" with no idea about anything and had consequently got them selves into a nightmare situation of carrying their skis through waist deep snow and were utterly knackered.

Having established that the helicopter was defiantly coming for them , we bid them Good Afternoon and continued on our way eventually we traversed into the lift system of Fiescheralp [where we somewhat ironically got lost] Anyway a very nice man let us on the chair- lift and we skied into the resort proper. We stopped out side a Hotel where the hotelier was seemingly touting for customers. He offered us for to stay in his Hotel,in the "Fritzel style" dungeon. After an excellent meal in his very fine restaurant the next morning we were back on the slopes , this time with beautiful weather and good powder skiing. We rode the cable car to the top of the resort and finally got to see where we had actually spent he last 4 days. 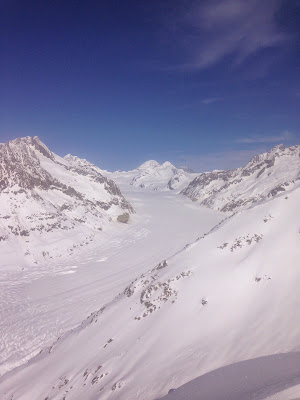 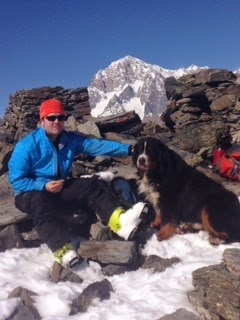 Peter Whelan joined me for four days off of piste skiing and ski touring around Chamonix. On our final day we were joined by Walter an ascent of Punte Crocce in the Aosta Valley.
Posted by Mark Seaton at 11:56 am No comments: