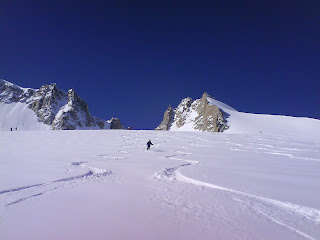 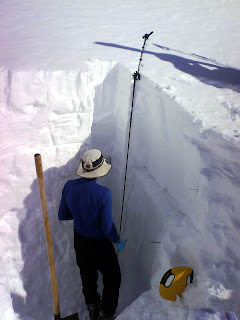 We have just come back from the Haute Route which we did with out a road break going via La Fouly then onto the Grand St Bernard Monastery through to the Velan Hut and then up and over the Plateau du Coulouir. Conditions were perfect and we didn't see a cloud for seven days. However when we awoke on the eighth day at the Vignettes Hut the bad weather had arrived. We decided to sit it out for a day in the hope that we might make it through to Zermatt, but the weather never improved and the following day we bailed to Arolla in thick snow an very cold winds,
Part of he aim of the trip was to collect snow samples which would be examined for Isotopic variations which might shed light on where and when snow is formed the atmosphere. The research was led by Professor Jim Kirchner from Berkeley University in California and two hugely experienced Avalanche Forecasters Faerthen Felix and Jeff Brown. The final member of our trip was Paul Laudenschalger from Truckee.
Posted by Mark Seaton at 4:29 pm