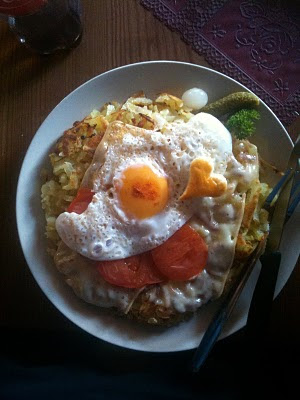 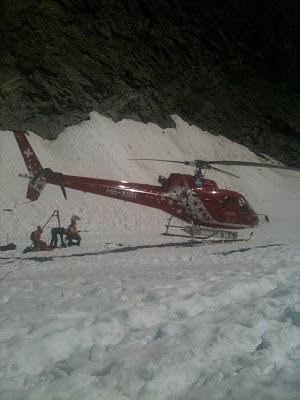 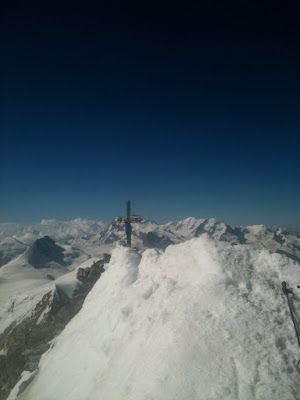 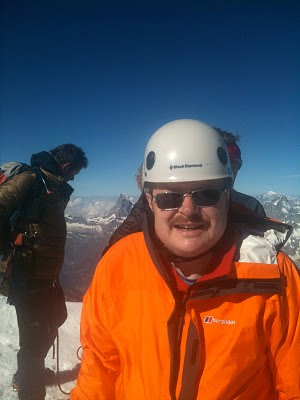 What a great trip this was for Peter Little and I . The Dom is the highest mountain in Switzerland and has the biggest ascent from the road head of any mountain in the alps. 3000 vertical meters.
The hut walk is about 4.30 hours. Breakfast was at a grim 2.30am and the ascent was 6.30hours to reach the summit.

The descent had various issues because the weather was so warm and the snow bridges were like butter plus the crevasses were massive. It was critical that we had lots of rope out between us even so there were a few heart in the mouth moments as we sank through the snow sometimes up to our waists.

Mind you any rope is better than no rope. We came across a rescue. Some guy had set off to climb the Dom on his own. He fell in a crevasse. The Hut Guardian reported him missing. Air Zermatt searched the glacier , found his foot prints leading into a big hole. Two Guides went down the crevasses and found him alive but only just. He was air lifted to Berne to "thaw" out.

After the Dom Peter and I were quite tired, we stopped at the Dom hut for a huge pile of Rosti before making our descent.
Posted by Mark Seaton at 4:54 pm