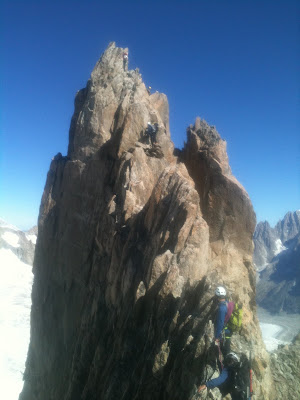 Peter Folkman came out for five days alpine rock climbing. The forecast was indifferent but unusually it was revised in our favour and the weather just got better and better.
We started with a warm up climb at Brevent then the next day moved over to La Flegere and climbed Nez Rouge just behind the Index.
On our third day we decided to revisit the famous arête de Cosmiques as this had been Peter's first alpine climb with me some 15 years earlier. This was the spring board which allowed him to climb many alpine peaks including the Eiger, the Matterhorn and many others eventually leading to full membership of the Alpine Club.
With the acclimatisation of the previous day we were then able to Traverse the Entreves - a magnificent rock ridge which looks down on Courmayuer.
On our final day we opted for an easier option and returned to la Flegere and finished by climbing the elegant Eperon Sublime? Named after the famous route in the Verdon Gorge.
Posted by Mark Seaton at 4:01 pm