We had a perfect forecast , a good freeze and little wind. Andrea and I left the scrum of the Aiguille du Midi and trotted down the ridge and to a great welcome at the Cosmiques hut where some of Andrea's friends had summer jobs working there.
Breakfast at 1.00am [Andrea claimed to have had zero sleep] We were away by 1.45am 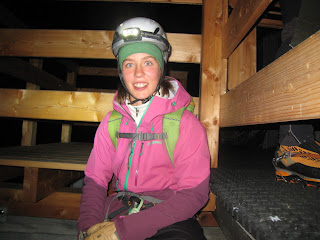 We plodded a long in a line of hopefuls and then started up the steepening slopes of Mt Blanc du Tacul - Everything was going fine until we came to a huge wall of ice with a moat like crevasse at its foot. There were about 20 "climbers" in front of us all making very poor attempts to climb the wall.
I became really concerned that we were loosing too much time. After about 20 minutes I decided to make my self unpopular,gambling that no one would start shouting at a 14 year kid so I circumvented the queue and sprinted up the wall then pulled Andrea up hand over hand.
Next we had to negotiate the ice blocks of last weeks serac collapse and then we were over the shoulder of Mt Blanc du Tacul and heading for the crux of the climb , the shoulder of Mt Maudit. We caught up several parties who were struggling with some of the crevasses. We slalomed around them and then we were at the crux of the climb a steep 100 meter ,65 degree head wall. Again we decided to move together , not pitching the climb and once again we passed several parties.
Astonishingly we had over taken everyone. We stopped for a rest. 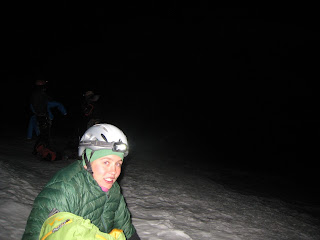 As we traversed around Mt Maudit dawn broke 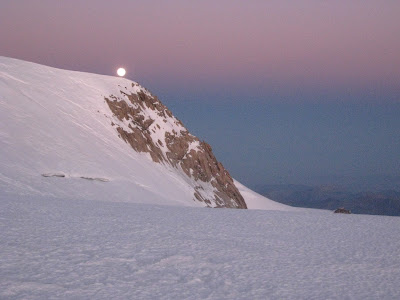 Next it was onto the final summit slopes of Mt Blanc, it was here that Andrea started to struggle with the altitude [which was not surprising because her acclimatisation had consisted of sitting at the top of Grands Montets for a couple of hours.]
Finally we hit the summit at just before 8.00am 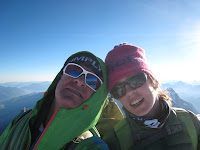 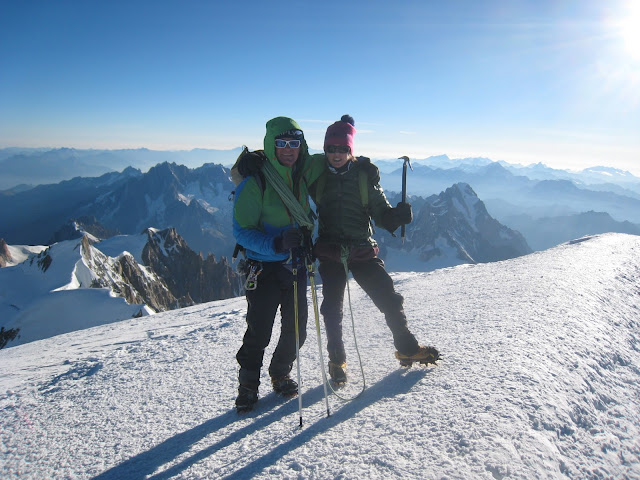 It was then down the way we came. Andrea ran down the slope , keen to get to some thicker air as soon as possible. 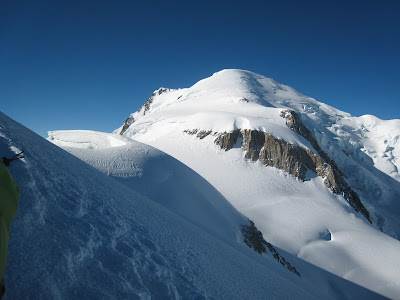 Brilliant - how happy you must both have been.
(I'd have been stuck in the queue)