Not this time for the Nose 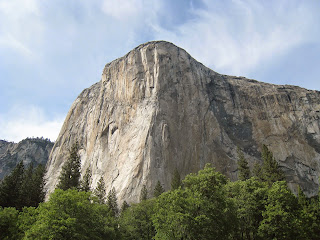 Our attempt to climb the iconic Nose of El Captan did not get off to a good start. We left the campsite at 6:30 AM and immediately got stuck in a traffic jam. In front of us a car had hit a tree and landed on the roof blocking the road. No one was injured apart from the drivers pride. (The idiot had been texting at the time.) 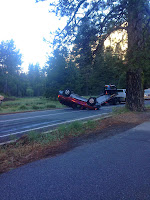 It was not a good omen. We lost a good hour and in that time the heat in the valley had soared.

As the saying goes everything in America is big. The style of climbing in Yosemite is Called “Big Wall”. El Capatan is the best example of Big - it is over 3000 feet of vertical rock.

The climbing is completely different to climbing in Europe. The method is to pack everything into a bag and haul or winch it up after you. These bags are called Haul Bags or “Pigs” [because they can be a pig to move.]

There were three in our team me and my two great American friends Jeff & Faerthen. Jeff had made one of the very early ascents of the Nose 40 years ago. Jeff was returning for his anniversary climb and he had invited me along. It was to be my first experience of “Big Wall” climbing.

So we eventually parked the car and wrestled the Pig out of the car boot.[Or trunk as the Americans call it] It contained  36 liters of water, our climbing gear our ropes our sleeping bags our food, plus underneath we had attached a Portaledge. As it sounds it is a portable ledge which can be erected in minutes. When it is set up you can sleep on it.

All this weighed over 100 kg and it was left for me carry it to the foot of the climb. As approaches go it was not very far-about half a mile but still 100 kg is the most I had ever carried. 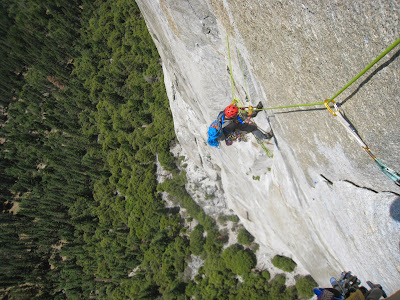 During the previous days we had fixed ropes to  the first 8 pitches to  the start of a feature know as the Stove Legs. These are giant cracks which could originally only be climbed by jamming sawn off stove legs into the cracks.  Fixing means we had left a giant 200 meter long rope in place so that we could climb the rope using special Jumars which clamp to the rope rather like cleats on a sail boats rigging. 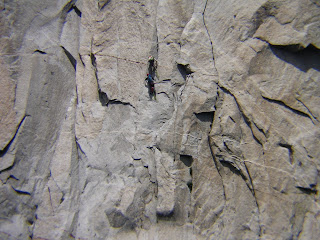 Our plan was to climb the fixed ropes to our highpoint and then haul the pig. Jeff set off up the fixed-rope first. It was as he arrived at a small overhang that he called down to say that he had torn a muscle in his back and that he was in considerable pain. I jumared up the ropes to meet him. Jeff's face was glum . When he tried to sit in his harness he was in agony. We were going to have to descend and abandon our attempt. 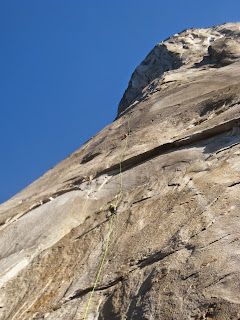 Before we could get to grips with the disappointment (something that is part and parcel of mountaineering) we had the practicalities of getting our selves and the pig safely down.  It made sense to jettison the water in order to reduce the weight. This task was far more difficult than it sounds because I was suspended several hundred meters above the ground with nothing to stand upon. Eventually after some spectacular acrobatics   I eventually lowered the pig down to the ground to join the others. We were all disappointed but at least we were safe and sound and still in a position to try again sometime in the future.  And in addition we had not been eaten by Bears.
Posted by Mark Seaton at 12:14 pm