Lloyd Donovan is probably the keenest of the keen when it comes to alpine climbing and he arrived to climb with me for six days. Prior to our meeting we had exchanged emails about what the possibilities might be. Plans had been laid. Then we got the weather forecast- utter crap.

The first day was to be okay , so not perhaps following best practice [because it is so high] we headed for the Cosmiques Arete on the Aguille du Midi. I need not have worried because Lloyd flew up the climb only being stopped by a lot of numpties ahead of us. We then had the chance to visit the glass box 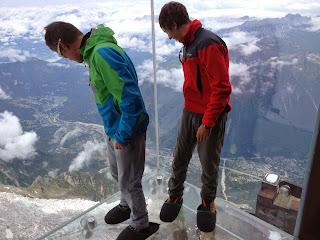 It was semi okay the next day but the forecast was to deteriorate so we decided to climb the Voie Caline - a long simple climb above les Bois. Well it is simple in the dry, but when it started to rain it takes on a different complexion - terrifying.

True to form the next day it snowed down to 2000 meters, so we went for a big walk up the Emosson Dam and climbed the Bel Ouseaux 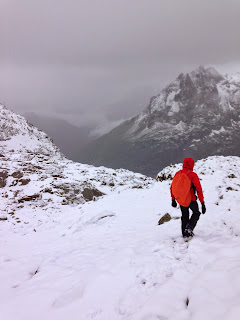 It was more like a Scottish winter scene than a summer Alpine scene.

The remainder of the week was spent dodging around the frequent showers and we did lots of rock climbing and worked on loads of training in "escaping from the system" - Things which ever climber need to know but never get round to actually practicing.
Posted by Mark Seaton at 2:15 pm