Scott Todd contacted me. He lives in the USA but his job had sent him to Germany for 3 months and he was keen to do some sort of climbing- any sort of climbing while he was in Europe.

So Scott arrived in Chamonix having left Stuttgart at 4.00am. We set off to climb at les Chesery above Argentiere. We had perfect weather and we thought we were climbing well until we were brought back down to earth when we were followed up the route by a hooved animal!A mountain Goat.

We finished by climbing the iconic Aguillette d' Argentiere. 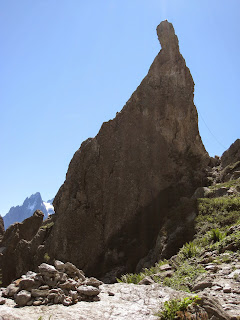 On our next day the weather was indifferent - raining hard in the morning with an improving forecast so we took the gamble to head to Switzerland where the weather was good and we climbed The outstanding Pantagruel at Les Trappistes crag one of Olivier Roduits many outstanding routes . 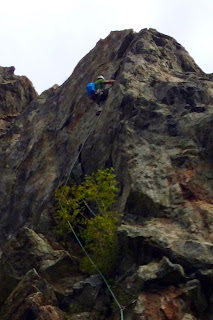 On our 3rd day the weather forecast was good- I suggested to Scot that we head through to Italy to climb the stunning Bucce d arancia at Arnad. What I hoped it would be a fitting end to our 3 days together. Well we left a sunny Chamonix drove through the Mt Blanc Tunnel to be greeted by misty miserable weather [ not what the forecast predicted] By the time we arrived at Arnad it was raining. Anyway not to be deterred we set off up the climb - Needless to say we were alone. Fortune favours the brave and it stopped raining and we had amazing climbing 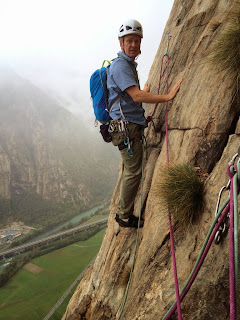 Until it started raining again. We had climbed all the difficult pitches and what should have been simple was not simple in the lashing rain and so we decided to retreat by rappel. This was surprisingly simple if not a little wet and muddy.
But all in all Scott got a pretty good taste of multipitch rock climbing in the Chamonix and surrounding areaa and he has promised to return ..
Posted by Mark Seaton at 8:55 pm