Just when you thought it was all over... Winter returns.

Steve Callaghan contacted me because he wanted to restart climbing after a long lay-off . He felt he was a bit rusty and wanted to brush up on his skills. We devised a plan through an exchange of emails , met up and headed up to the Mer de Glacé. This is a very good place to cover everything there is to know about ice axe ,crampons, rope work , steep ice climbing and look at how stuff has changed in the thirty years since Steve had last been climbing. However it was difficult to imagine how he had ever been away because he took to it all like a duck to water, 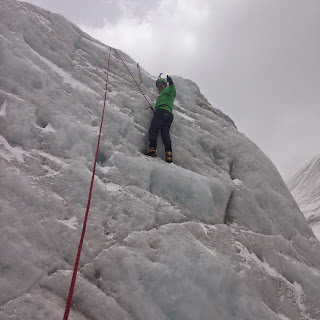 This was despite the weather being more arctic than alpine. Winter had seemingly returned and the temperature had dropped by 30c in a week. 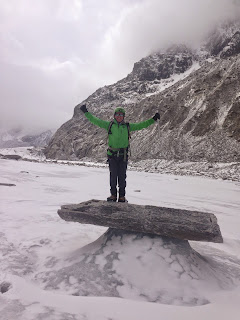 We had the whole of the Glacier to ourselves.

Our first day was a success and so the next day we headed up the Aiguille du Midi to attempt the iconic Cosmiques Arete. Not for the first time the Aguille du Midi was slow to open , primarily because it is run entirely for the convenience of the people who work on it and not the paying public. Eventually it did open and we descended the ridge and plodded round to the start of the route. Luckily there was a party in front of us, I say luckily because it was they who ploughed through the 130cm of fresh snow. Eventually they became exhausted and it was left to Steve and I to gallantly plough the furrow. 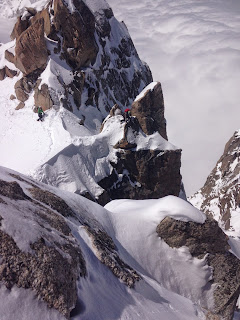