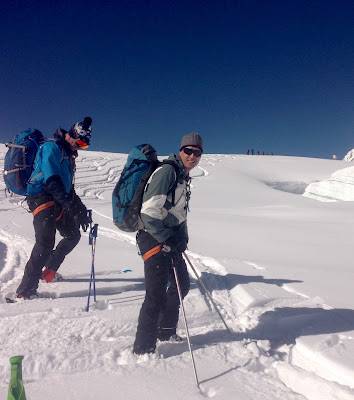 The Hewitt brothers; Tim and Ben arrived from Perth Australia to attempt the Chamonix Zermatt Haute Route. Evidently they had done their research well. They had made their booking with me roughly a year ago. They had decided they did not want to be part of a Haute Route package where they got "processed" along the route. They had chosen the optimum time [just after Easter] and additionally they had built in a few extra days in to their schedule with me.

All was set up well apart from the weather. The weather was a bag of crap. Foehn had been blowing for days and stripping the snow from the slopes. Further because it was so warm , the snow wasn't freezing at night the net result meant it was dangerous , especially at lower altitudes where there was a real danger of full depth avalanches.

With all this in mind we met up and Ben and Tim said they were not too bothered if they did the Haute Route or not, the end game was to have a good time. Considering the weather forecast this sentiment was just as well - BUT - I didn't believe a word of it.
If you have traveled half way round the world it is preferable to go back with a result.

We started with a warm up day at le Tour. Foehn made for soft slushy snow. Next day the Foehn was blowing even harder - so there was a logic to try and escape the Foehn by going through the Mt Blanc tunnel and heading round to Punte Crocce , high above La Thuile. We saw no one all day.

When we got back to Chamonix I re looked at the weather forecast for about the 10th time that day. It was surprisingly better. So much so that I thought we had a chance of at least setting off on the Haute Route.

Wednesday 6th April was the day. I awoke to the sound of lashing rain. I went to see Tim and Ben at their hotel and said we would go and have "a look" , because the forecast was better for the afternoon. Meanwhile I said to their hotelier that "we might be back tonight."

I could just see enough from the top of Les Grands Montets to set off down the glacier but the conditions were hardly ideal and the light was at best "flat."

Up over the col du Passon 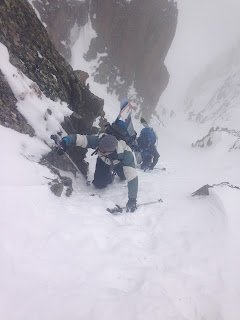 and immediately into thick thick cloud. So thick that it was necessary to keep throwing snow balls to see which way they rolled , all in an attempt to see where the slope was. Thick mist and skier swallowing crevasses all made for a toxic mix.
It was with some relief that eventually we dropped out of the mist bang slap in the right place just above the Albert 1er Hut. 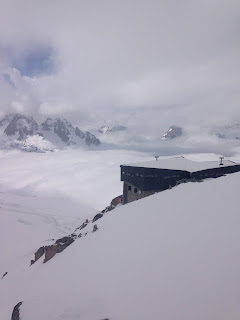 It was in the evening that the weather cleared 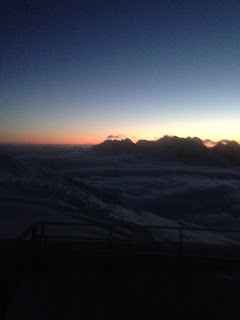 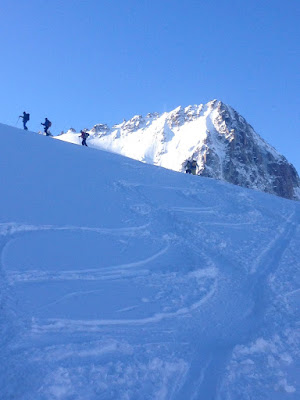 The ski down the Val d'Arpette was on spring snow and was very good all the way to coffee in Champex. We shared a taxi with the only other group on the Haute Route and transferred to Verbier. We stayed the night in the town and the next day skied off the top of Mont Fort and all too quickly into a wall of impenetrable fog. Out came the map and compass and eventually we navigated out of the fog into clear blue skies. The ski down to the Prafleuri Hut was memorable: 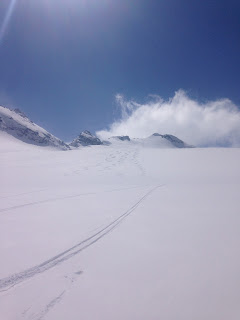 That night [8th April] it snowed and put down about 20cm of new snow. Luckly for us the next day was " Grand Beau" and we headed around the Lac des Dix and up to the Pas de Chèvres before catching some fresh snow and a great descent to Arolla where we hit a glitch on the accommodation front . Our first hotel choice had been commandeered by the Swiss Army as its base from which to organise the Patrouille des Glaciers . PDG - The famous ski mountaineering race. The rest of the Hotels had been booked out by people training for the race. Nevertheless we did find a perfectly good bunk house.

On the morning of the 10th April we left the village of Arolla at about 7.00am for the big ascent to the spectacularly positioned Bertol Hut 3268 meters: 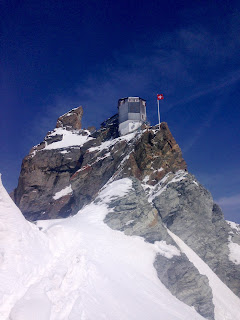 We were there for a Rosti fueled lunch. 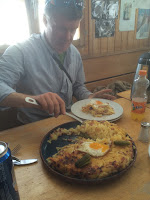 As audacious places to build mountain huts the Bertol is up there with not many others. The view of the sunset towards the Dent Blanche is a view that gets branded on your memory: 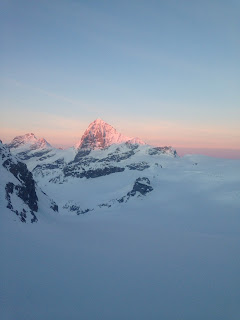 The exit from the Hut the next morning was thought provoking especially if you don't like ladders. Which Tim only decided to tell me on the descent, having had a sleepless night in contemplation. 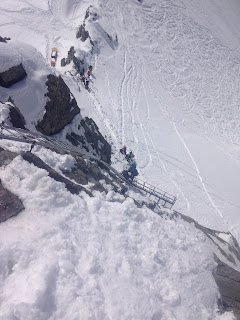 The final day. The weather was clear and cold , but the forecast was for a deterioration . The big of advantage of completing the Haute Route via the Bertol Hut is that you are ideally placed for a quick dash to Zermatt because of the high position of the hut. An hour and half and we were at the Col de la Tete Blanche 3589meters. It is here that we peeled our skins off for the final time. We started the descent of the Zmutt glacier on snow which was more akin to broken plaster board. However a little further down we found the real stuff: Acres of untracked powder: 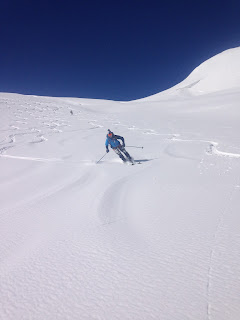 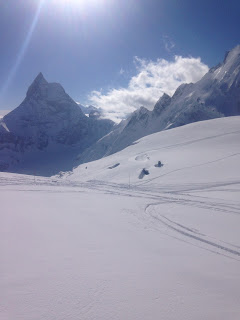 We finally took our skis off in Zermatt , then it started to rain.