Mont Aiguille: Climbed by some Yokel in 1492. How hard can it be? 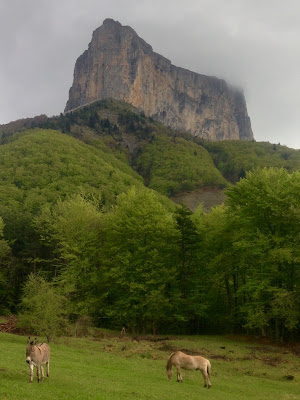 Mont Aiguille , seen from the wonderful RN75 Grenoble to Sisteron road is spectacular. In fact it looks formidable from every aspect. It really is the stand out mountain of the Vercors region or for that matter anywhere in France. It was first climbed in 1492 by Antoine de Ville on the order of King Charles VIII. This was undoubtedly a herculean effort which at least in Europe is seen as the birth of mountaineering/ alpinism, yet the sport did not spontaneously take off because it took nearly 350 years for Jean Liotard to psyche himself up or its second ascent. Still how hard could it be ? Reuben and I were about to find out.

We drove down from Grenoble and did not immediately see the Mont Aiguille because the the weather and the forecast were decidedly indifferent. We pulled into the village of Chichilianne which is at the foot of the mountain. 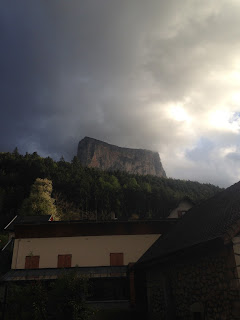 It was not difficult to find the hotel as it was the only building not inhabited by cows. It had seen better days. Probably in the 1950's. Retrieving our bags from the car was unpleasant in the heavy rain but negotiating the hotel's demonic pet wolf was ,at best, inconvenient. On the other hand dinner was surprisingly good and our optimism improved the more flaggons of rouge we consumed.

During the night it continued to rain , then the bedroom shutters started banging in the wind. The scene was garnished with flashes of forked lightening. At breakfast at least it had stopped raining. We set off up the hill on a path which wondered through some beautiful broad leaf forest. There was nothing wrong with the path apart from its gradient. Its angle was so low that the switch backs through the forest went on and on with no seemingly determinable height gain.
Yet eventually and with relief We arrived at the Col de L'Aupet 1672m after an hour and half. It was now just a question of leaving the main path and hacking up the scree to the start of the route.

I had made some assumptions based on what I had read about Mont Aiguille. I had read that the ascent is incredibly popular [some would say too popular with lots of overcrowding] Yet Reuben and [Adams Family who run the hotel] were the only people I'd seen in the last 12 hours. Secondly the description in the French Alpine Guide book suggests the climbing and critically the route finding is simple. Further the guide book gives the route the grading of PD. Peu Difficile [little difficulty.]

So how hard could it be? Well finding the start of the route was proving neigh on near impossible, there was no path, no sign, no clue. Added to which there was a gale blowing and it was now spotting with rain. Fortunately apparently out of no where the Chasseurs Alpins conveniently turned up. [Otherwise known as French elite Mountain troops.] Their commanding officer showed us where the route started. Which even with hind sight was NOT blindingly obvious.

Once we were established on the climb things were much better although there is no way in hell it could or should be described as a scramble, rather it is a spectacularly exposed rock climb: 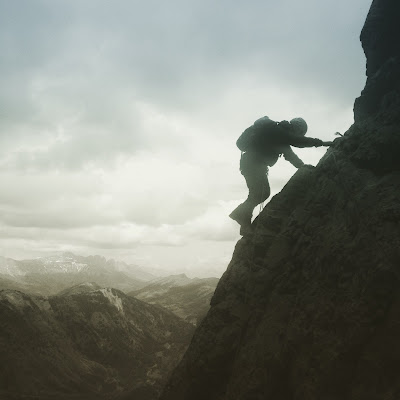 The climbing is varied and in places follows some fixed cables, ridges , slabs in fact the whole gambit of alpine style rock climbing. 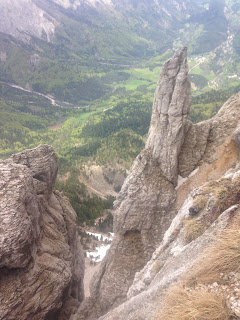 Finally the route follows a wet , stepped chimney which has a big thick cable running its entire length which is there to grab hold off. In the event of a summer storm it would very quickly become a waterfall. At the top of the chimney it is a relief that the ground opens out into another world:

You could be forgiven for thinking you had arrived in the Dales. All that was missing were sheep and a bloke with a cap,checked shirt and a Quad bike. 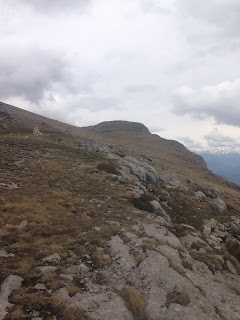 It took about 15 minutes to walk the length of the 'field' to where the true summit lies. Once you look over the edge of the field your immediately reminded your not in Yorkshire and secondly you are treated to a 1000meters vertical drop [3000ft for the imperial measurement readers of this blog] Squirrel Suiter's paradise: 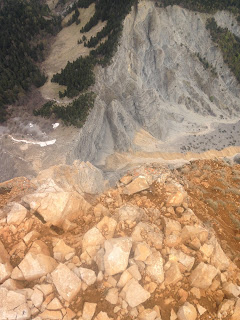 Now the one thing that the guide book was adamant about was that the line of descent is not the line of ascent. Rather you follow a long steep gulley which ultimately ends with two intimidating 45 meter abseils. The start of the descent is marked by a plaque commemorating the 500th anniversary of the audacious 1st ascent : 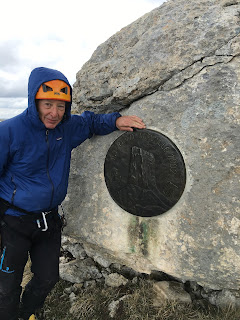 We followed the long descent couloir [which still had a lot of snow in it] and eventually found the departure of the first abseil. This was straight forward but needed care not to dislodge the many loose stones. The guide book was categorical about the the final abseil stating that it went over a cave and therefore into space. It remained in space for the next 40 meters . What the guide book neglected to say was that the abseil deposited you in a giant chasm with no obvious exit [ well not obvious to me as I hung like a spider.] Eventually after some Shenanigans [using my Iphone as a torch while holding it in my mouth] I did find the exit out of the cave system and then shouted to Reuben to come down. We climbed out of the cave and into a beautiful spring afternoon, from where we rejoined the path and headed back down through the forest.
Simple really [NOT.]