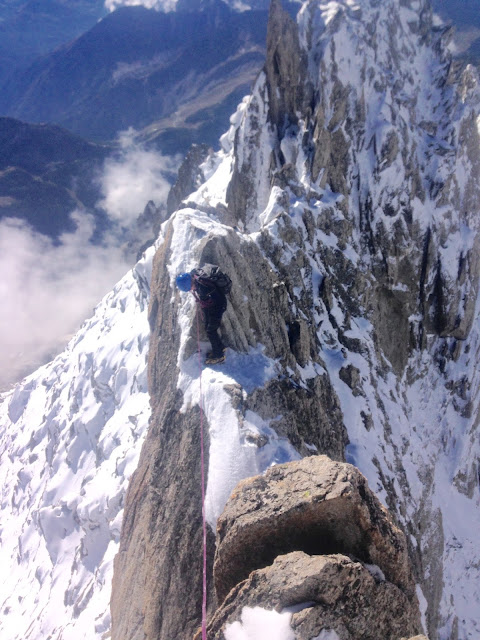 It did not start well. The stellar weather we had enjoyed for about a month had come to a big full stop. The forecast was poor for the entire alps. This coincided exactly with the arrival of David Brooksbank.

I met David with the inevitable trepidation of someone bringing bad news and disappointment. This was because David's primary objective of climbing the Weisshorn was already dead in the water. The only way we were going to do any climbing at least in the short term was to leave the Alps and drive south. Fortunately David had a very positive disposition and up for my suggestions. So this is what we did:

Saturday 17th September. At 8.00am I picked up David from his hotel and we headed off. It was cold grey and chucking it down. We drove past Annecy and it was still raining . We passed Grenoble and it was raining harder. We picked up the RN 87 and as we drove over the Col de Croix the rain had stopped. Instead it had turned to sleet. It was a question of holding the nerve and believing in the forecast, which stated it would be good in Orpierre...
As we descended the other side slowly it began to clear and by the time we reached our destination of Orpierre the sun was shining and we had a long afternoon climbing on the crags above the village. This was very much a refresher for David who hadn't been rock climbing for around 40 years!

We stayed at what has become my regular port of call - the very good, but slightly quirky Hotel Le Ceans. It's another establishment where no matter how hard you try you will not get the Madame to utter one word in her native language but insists on speaking my native language. Putting this aside ,there is a reason for going there because the hotel sells the best beer I have drunk in France -Beer Alphand, a brewery started by the famous French downhill skier Luc Alphand [the Hoteliers cousin.]

Sunday 18th. The sun was out , but the result of this was that the cliffs were mobbed with people. Orpierre can be one of those places that no matter how badly you think you are climbing it is a certainty that there is some one far worse than you. Unfortunately for David and I some of these people were on our chosen climb. Yet non of the acrobatics seemed to phase David one bit and it was as if he had never been away from climbing. 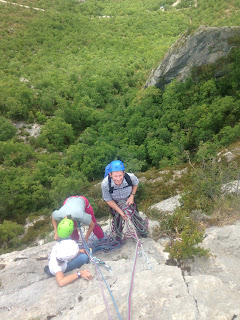 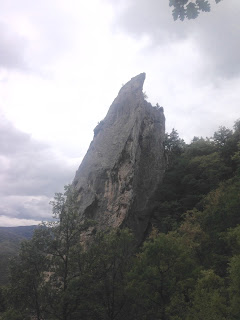 After we had finished climbing we "relooked" at the forecast . It was still bad for the Alps but very reasonable for the Vercours , so that is where we went. The plan was to attempt the Mont Aiguille. The only problem was it started to rain.

We arrived at the Au Gai Soleil Hotel at the foot of Mont Aiguille. We enjoyed a very competent dinner and excellent wine.
David and I looked like the only climbers staying in the hotel, because we WERE the only climbers. We went to bed and it was still raining.

Monday 18th. We left the car at 7.45am. It had stopped raining but it was distinctly soggy as we walked up through the rather dark broad leaf forest. We were at the foot of the route for 9.00am and summited at 11.30am just as the weather cleared to give views of the Ecrins mountain range plastered in snow. 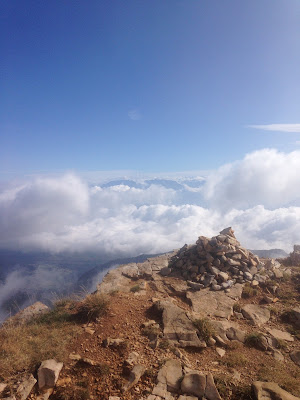 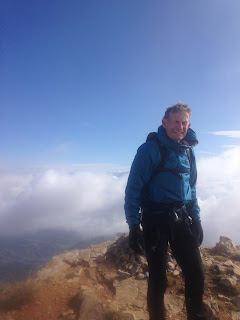 We then had the small matter of the descent. The descent goes no where near the line of ascent. While the ascent is relatively straight forward the descent is not. Firstly it follows a series of chimneys which are comparatively simple to down climb , then a more open gully where there is potential to kick lots of rocks down because it is dangerously loose. It was while descending this part of the gully that we met the only other life forms we saw all day - namely a bunch of Ibex. 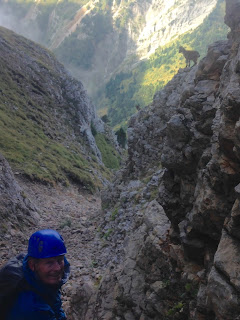 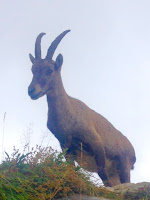 After our wildlife encounters we were confronted with the key part of the descent - the two committing rappels. The second of which disappears into a chasm where the exit is far from obvious. In addition the potential for getting the rope caught is very high. 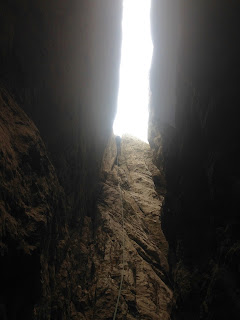 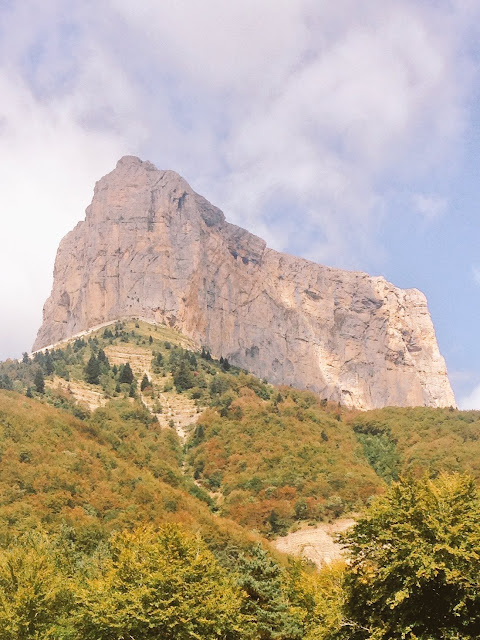 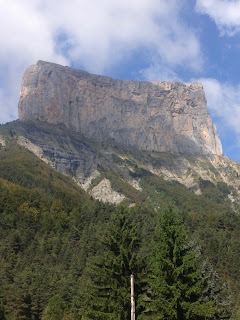 Once we had sorted this out the climb was done and dusted. All that remained was to retrace our steps back through the dark forest where we were back at the car at around 1.00pm. A quick look at the weather forecast suggested that we should try our luck by returning to Chamonix which we duly did.

Tuesday 19th. The Cosmiques Arete . This is one of Chamonix's "must do" climbs. But if you must do it , don't do it in high summer otherwise it becomes an exercise in queuing. This is to say that it is so busy that the climb becomes untenable.
Instead David and I found it in perfect condition. We had a beautiful clear windless day . While we did not have the climb to ourselves all the teams moved along simultaneously. Consequently we enjoyed a very good alpine day. 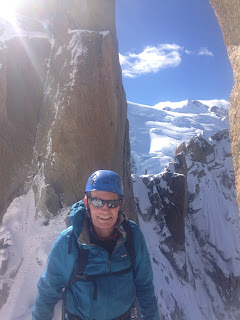 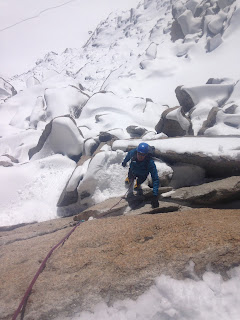 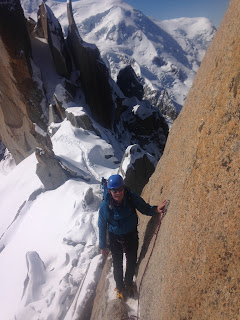 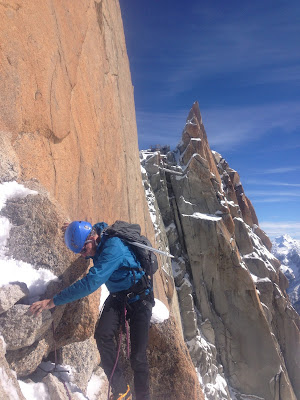 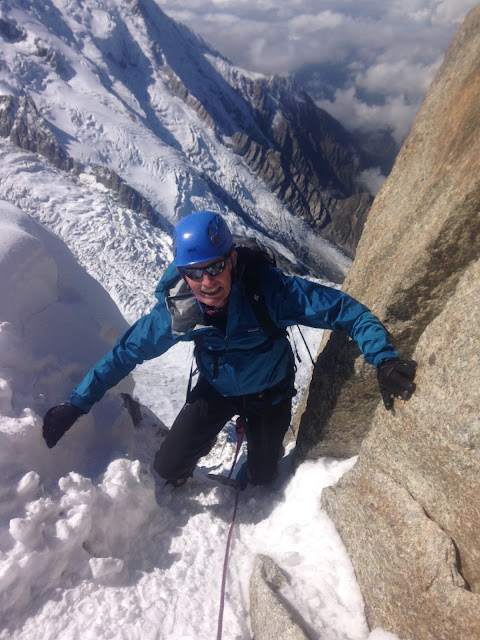 Wednesday 20th An indifferent day was forecast . Not terrible but not inducive to going into the high mountains. We decided to go rock climbing at Les Chesery high above the village of Argentiere. We climbed the voie Bleu which was good but we were completely humiliated when a Ibex wondered up the 1st 5c pitch. 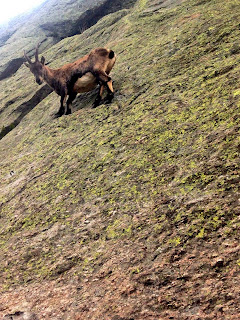 David was convinced he and his friend had some how traveled all the way up from Mont Aiguille because they looked surprisingly similar. 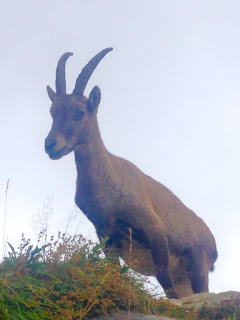 Thursday 21st. There had been some snow overnight yet as the weather forecast predicted the day dawned bright. We left the top of the Helbronner lift and headed to the start of the Traverse of the Entreves. It was cold and clear and there was a real feeling of Autumn. Clearly I am up in this area a lot , but there are certain days when it looks and feels magical. This was one such day. There was a track in made by a couple of people way ahead of us. So we enjoyed the solitude with all the benefits of someone else breaking trail and clearing snow off the key holds. 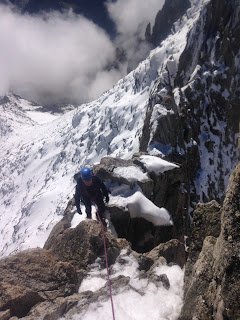 This was the last climb that David and I did together and wrapped up the 6 days we spent together. Despite the appalling weather forecast at the begining of the week we did not get rained on once. 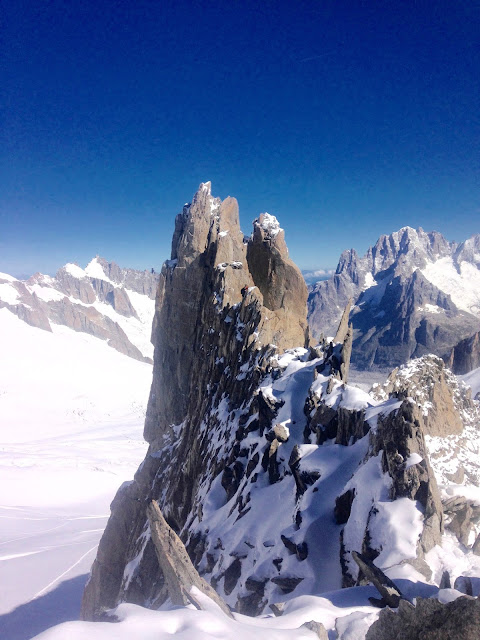 Once again it shows that you need flexibility to enjoy the climbing in the alps and always a plan B. [Or C plus the rest of the alphabet]

Unknown said...
This comment has been removed by a blog administrator.
1:36 pm

What a brilliant, inspiring blog!