Conditions just got better and better as the week progressed

The snow of the previous week set up Russ Bragg and I well. Nevertheless the weather in Chamonix was grey and miserable for our 1st day. We decided therefore to head through the MT Blanc tunnel to Courmayeur , where there was blue sky and importantly it was 10 degrees colder and the snow was feather like . The skiing was the best I have ever known in Courmayeur plus there was know and no one about.
On Tuesday again the weather in Chamonix wasn't great so we decided to head through the tunnel once again- this time with the intention of skiing in La Thuile. Yet when when we appeared from the tunnel the weather wasn't great - but it was snowing! We had a remarkable days skiing in what was virtually our own private ski resort.
It continued to snow over night and it got colder and importantly it snowed with no wind.
Wednesday morning was one of those once in a blue moon days. The ingredients were perfect. 20 cm of fresh cold snow fell with no wind. There was hardly anyone about and so we headed for La Flegere. It was Russ best days skiing ever.[So far I suggested}
On Thursday the weather looked good again so we headed back up to La Flegere with the intention of making the traverese to La Col des Montets. However the honeymoon was over the wind had picked up and had destroyed the powder and also created a significant avalanche risk. We contented ours selves finding what untracked snow we could find close to the pistes. It did not matter because we were so tired from feasting ourseleves on the previous three days snow. 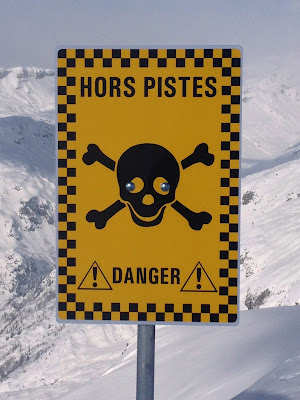