A week of two halves

Bill Mills and Greg Knott arrived towards the end of a period of weather that had been bakingly hot. In fact my view was that the Off- Piste lift accessed skiing was shot. The snow was awful. It was just as well that our plan was to go high and ski tour.
We drove round to Arolla and headed up to the Dix Hut , firstly negotiating the ladders at the Pas de Chevre 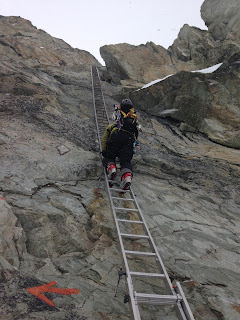 The Dix Hut has a new guardian and they have really upped their game- it was a really delightful place to stay and the sunsets were magical.
The next morning we headed off to climb Mt Blanc de Cheilon 3870m.

The ascent was far from simple, a combination of high winds and concrete snow and the need to traverse under some menacing seracs made the whole thing seem serious. Mind you the view from the top was worth it. Five hours up and 45 minutes later we were tucking into Hut Rosti and a second night in the Dix Hut.

Then the weather broke. The next morning it was windy and horrible. The decision was simple we had no choice but to bail to Arolla. We checked into the absolutely magnificent Kulm Hotel and then went skiing in Arolla for the afternoon where we didn't see very much and quite frankly it was pretty miserable.

On Sunday morning we awoke to 40 cm of fresh snow. Clearly the ski touring options were not good so we left Arolla and headed for the resort of La Tsoumaz where I hoped there would be good skiing through the trees. I hoped but was not sure because most of the snow had fallen above the tree line. However the risk paid of and the skiing was very very good. In the afternoon we traversed over to Verbier and got a memorable descent of the Vallon d'arbi. 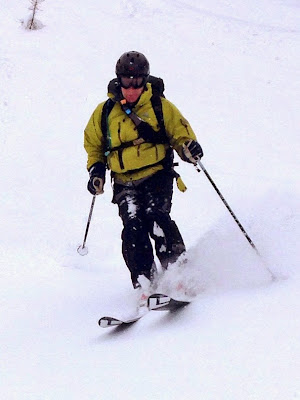 It was then back to Chamonix to ponder the weather forecast for the next day. It was for snow. So if we were going to ski then we needed trees so we could see. The logic was to head through to Courmayuer [There is limited off-piste tree skiing in Chamonix] This plan went wrong when we exited the mt Blanc Tunnel because there was no new snow and the weather was clear. We almost turned round , but decided to suck it and see . This turned out to be the right decision because although the snow at tree level was dire high up it was sensational and because the weather was actually good we had some of the best lift accessed of the season. 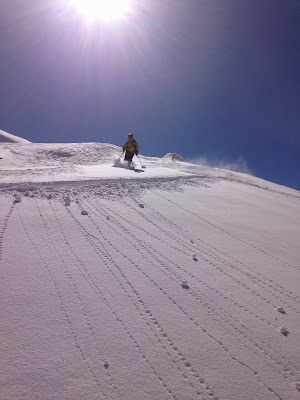 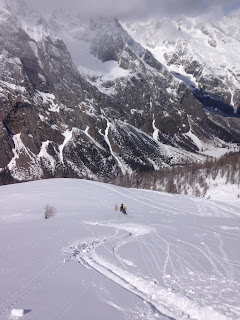