The trip did not get off to the best start. I was delayed twice and missed my 1st two flights due to fog in London. Finally arrived at Heathrow eight hours late. Eventually with great help from HRG travel agents I found a flight to Kilimanjaro International airport via Amsterdam and via Nairobi and actually arrived before my partner in crime for the trip Charles Sherwood.

My Next problem was I did not have the required $50 for my Tanzanian entry visa. I was told to go out side the airport withdraw unfathonable amount of Tanzanian shillings [about 80,000] from the ATM , then go to some dodgy guy who would then convert them into Dollars. All while the immigration officer would "look after " my Passport until I returned...

Unsurprisingly the ATM was not working , so back I went , then a very strange thing happened: An American over heard my disagreement and just handed me a $50 dollar bill! Problem sorted. 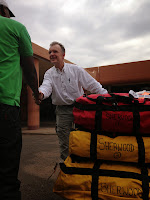 and driven to fantastic Moivaru Lodge which appeared to me to be in the middle of the jungle. Here we got the first sight of Kilimanjaro which was on the label of the beer bottles we supped. 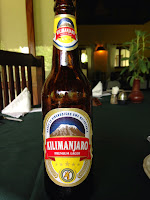 Our plan was to climb Kilimanjaro as a way off getting some solid acclimatisation for the real challange of making the complete and rarely achieved traverse of Mt Kenya. We were to start our trek on Kilimanajaro by the Machame park entrance. This is apparently considered to be one of the most beautiful routes. We left the Hotel and gradually picked up people who were going to help us , firstly the cook , then the guide Onex and then a second guide JV [never really sure why we needed a 2nd guide] Then we stopped for an hour so they could all have breakfast , then we arrived at the park gates where we went through a mountain of paper work , met our porters [8 of them] and finally set off around mid day. 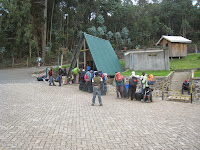 We trekked up through an area of forest called the Montaine forest. This is of course rain forest and it lived up to its name by raining torrentially. Fortunately this coincided with lunch and as we rounded the corner our rather Colonial looking Tent had been erected , table was laid [complete with table cloth ] tea was served with sandwiches and hot soup. 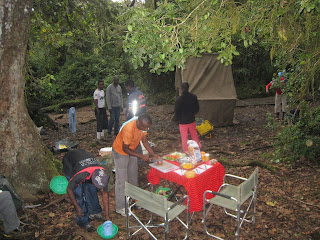 All this rain did create a load of thick mud so when we arrived at the Macheme camp 3000m we were already filthy. The camps on Kilimanjaro are somewhat busy and seemingly chaotic . There must have been about 250 tents. 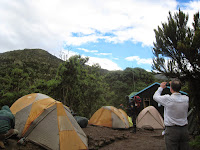 The next day our destination was Shira Cave campsite at 3850m. It wasn't long before it was raining again, it was cold wet and pretty much like the average day in the Scottish mountains. The weather was shaping up to be exactly like it had been 13 months previously , when Charles and I had last been on Mt Kenya, namely crap.
However in the late afternoon the weather did clear to reveal impressive views towards Meru peak and behind us the first real view of Kilimajaro. This was more like what we had hoped for.

The trek form Shira camp to Barrunco Hut 3950m involved firstly walking up to the Lava Towers at 4600m before descending down to the Barrunco camp. This was all part of the well tried formula to aid acclimatiastion "climb high - sleep low"
Still after the initial hour of glorious views , it wasn't long before the mist socked in and it started to rain hail and eventually snow.
At least it cleared up in the afternoon to reveal what a fantastic spot the Barrunco camp is. It is situated bang slap under the giant Breach Wall of Kilimanjaro [until 20 years ago some of the finest ice climbs in Africa.]

The next day it wasn't raining and we set off up the steep scramble towards Barafu Hut at 4800m. The first part of this was really enjoyable and my favourite part of the trek so far. Yet as we got higher the landscape changed and it became very lunar looking. The challenge of this day lay with the porters because there is no water at the Barafu Hut camp and so it all has to be carried. This was mostly done in 20 litre buckets. A grim and herculean task balancing 20 kilos of water on your head and struggling up hill at over the height of Mt Blanc.

Rather embarrassingly we had to wait for them to catch up and so we were forced to stop for an extended lunch in our colonial tent. Fried Chicken and chips and several cups of tea [or in Charles case "Milo" his new favourite African drink]

We arrived at camp late afternoon. It was over dinner that Onex our guide broke the news that our next breakfast would be at 11.00pm. We would be out and on our way for our summit attempt by 11.30pm.
This was to be a big day . 1300 meters of ascent. Unfortunately after an hour it proved too bigger day for our 2nd guide JV who was complaining of a "splitter" - altitude headache.
Onex Charles and I continued , overtook everyone on the mountain and arrived on the summit well before dawn and well before all the other parties.

It was super cold. Full Mt Blanc style clothing , duvet jacket and toe warmer T-bags. Plus big boxing glove like mitts. What I had not anticipated was just how fantastic I would find the summit 5894m . I have been lucky enough to stand on a lot of summits , but the top of Africa ranks amongst the best. 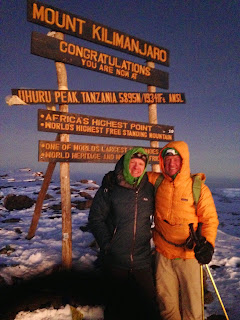 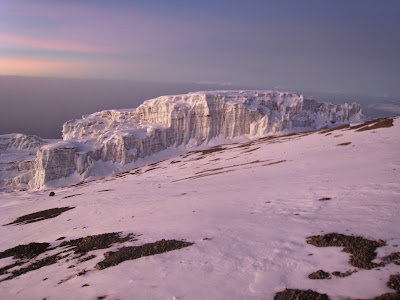 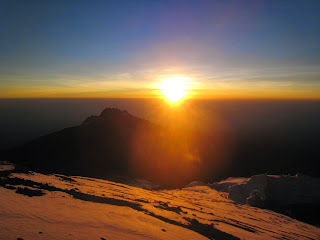 After a lot of photos it was back the way we came , firstly around the giant volcanic rim to Stellar Point and then back down the track to the campsite where we arrived at our tents at about 8.30am.
Charles and I were feeling tireder than we had wanted to be.
After a couple of hours lolling in our pits we had brunch. After which was the next challange of the day was the 4 hour descent to Mweka camp 2950m. Again this was a seemingly endless luna like scape which was made even less inviting when it started to rain big time.With this came mud. Lots and lots of mud which made the campsite like something a battle field.
During the night the rain stopped and there was real alarm that a lion was loose in the campsite. This in fact was me snoring. I was tired.

11th January. This was to be a big logistics day and so an early start was needed. We set off for the road head at 6.30am and arrived at the Park Gate at 8.30am. We signed out of the park and collected our Kilimanajro summit certificates. Our pick up arrived and took us to a hotel where we showered and repacked. It was then to Kilimanjaro International airport for our 2.00pm flight to Nairobi.

It was here while waiting for our flight that we learnt about the terrorist attack in Paris. [The last time were in Kenya we were caught up in the fallout from the Westgate shopping Mall atrocities]

At 2.00pm We were told we could board our flight. We went out on to the runway but it took us several minutes to find our plane which was not a tall what I had anticipated but instead a single propeler engined 15 seater Cessanna Caravan.
There were 4 passengers. 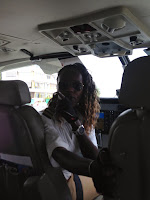 The flight was brilliant. 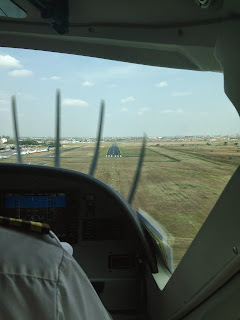 The plane didn't climb higher than 2000 meters during the whole flight and bounced around in the thermals as it flew across the savannah. Nor did it land at Jomo Kenyatta International airport , but instead at Wilson aerodrome. After filling in the Ebola forms and passing through immigration our taxi met us and whisked us to the wonderful Fair view Hotel. The day had run pretty much perfectly. In addition we were greeted by Eddie our guide for Mt Kenya who I have known for over 25 years.

Fun! Now if you can dodge those pesky idiot
Islamist terrorists then the rest should be easy !