We left the comfort of the Fair View Hotel having scraped most of the mud of our kit, dried it all out ready for our attempt on Mt Kenya. We trundled through Nairobi before hitting the open road . Eddie might be very good at organizing the logistics of our climbing but what he wasn't very good at was finding a suitable place for my birthday lunch. The cafe was like a scene from Hell with Chicken and chips which had been deep- deep fried and then cremated with a blow torch topped off with warm, almost hot beer. 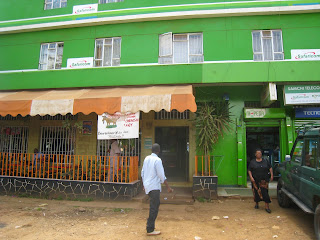 We continued on up to the park gates where we checked in for the week and re fixed the wheel on the Toyata Land Cruiser which was threatening to come off. 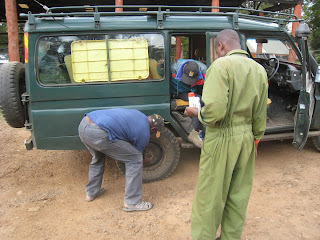 We arrived at the beautiful Met Station 3000m at about 3.30pm.
Unlike Kilimanjaro camping, there was just one other tent and plenty of lush grass to pitch the tents on. The last time I had camped here was in 1988. It was during the night that our neighbours tent had been attacked by a lion and we had all had to run off and hide in a hut. This time the only wild life were some pesky monkeys.

13th January we set off walking , again through rain forest , but this time it wasn't raining . Our goal for the day was to arrive at the American Camp , some 1300 meters further up the mountain. This involved negotiating the "vertical bog."Fortunately it was dry and our progress was rapid. We enjoyed stunning views in every direction and got our first view of Mt Kenya 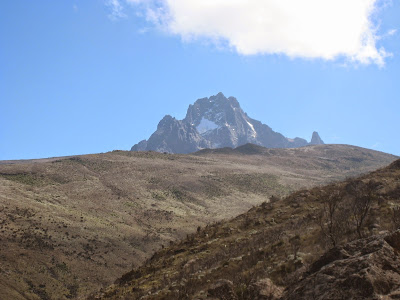 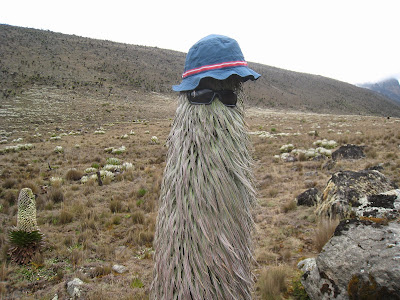 We arrived at the camp 4300m at about 4.00pm. I was tired and immediately fell asleep in the grass. 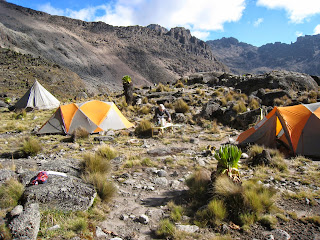 The plan for the next day was to walk up to the foot of the route , scope the approach , come back down , pack up , rest up and prepare for our big day. The approach has changed considerably since global warming has decimated the glacier, leaving just a Tarn at the bottom. 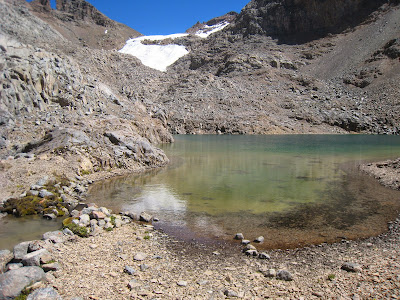 We awoke, had our breakfast cooked by the quite magnificent Ashford. Charles elected for a " full English" I didnt fancy this so I had porridge, honey and bananas. Eddie and his side kick Lloydford volunteered to carry our rucksacks to the foot of the route. We all set off at 4.00am.
At 6.00am we aarived at the start. There were 2 Germans, with their Guide Felix, who had climbed a lot on Mt Kenya while taking his degree in Physics at Nairobi University. They set off while Charles and I geared up , Eddie thrust Mars Bar offerings at us. We elected to climb in rock boots carrying our big mountaineering boots in our packs.

The climbing was good and straight forward. 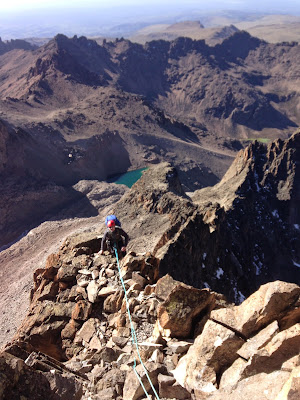 We mostly moved together and quickly. We arrived at Baillie's Bivy after a couple of hours, then overtook the Germans before climbing the very good crux pitch [IV] before some easy scrambling lead to the top of Nelion at about 10.00am. Perfect weather and no wind.

We changed back into our mountaineering boots and got ready for the "real climbing" namely the traverse of the Gate of Mist and the ascent of Bation. We negotiated the ridge which which was just like any typical alpine ridge in the Alps, only higher. Soon we spied some steps in the snow which supposedly lead down to the Gate of Mist. We strapped on crampons and down climbed until down climbing became sketchy and we decided to Rappel the final 30 meters . 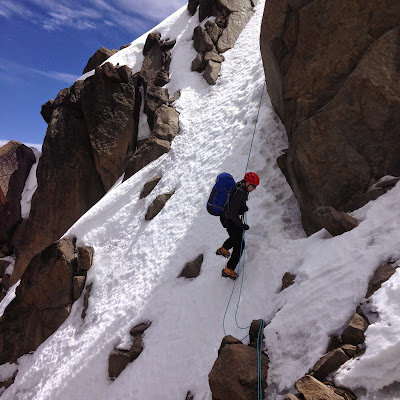 [The German climbers elected to stay on the crest of the ridge and then rappel down to the Gate of Mist.]

Their choice was faster , but did require a long rope which we did not have. Anyway we were now in the Gate of Mist and now we had the not inconsiderable task of actually getting onto the summit of Bation. I pulled out the radio at mid day so that we could have a prearranged check in talk with Eddie at back at base camp. 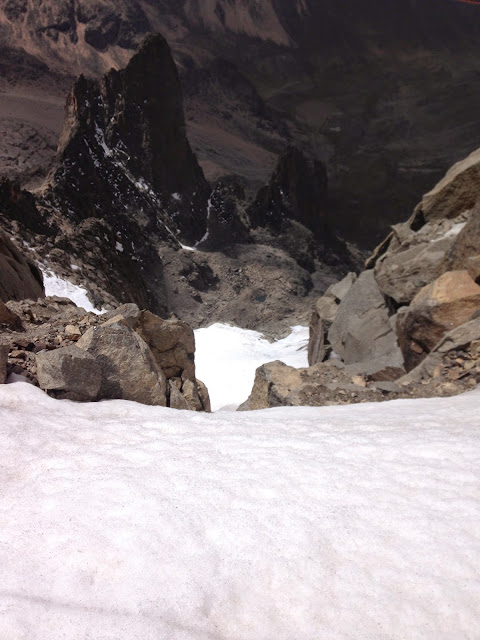 There were about 3 pitches to the summit the penultimate being of outstanding quality. Although probably no more than IV, it felt quite involved at over 5000m ,wearing big boots and carrying a full alpine pack complete with bivy gear. 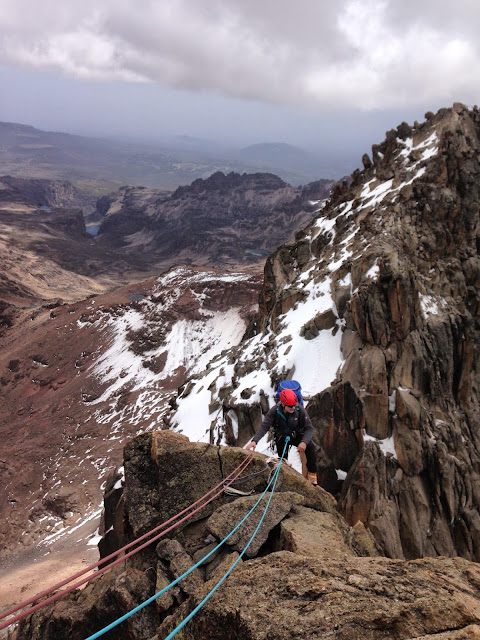 We summitted at about 1.00pm. The weather was still good and so we were able to initiate the second part of the plan: Namely to traverse and descend the north face route. This was fairly audacious because it required crossing from the southern hemisphere [where it was summer] to the northern hemisphere [where it was winter.] This meant that we would descend the route in full winter conditions.

The descent was choked with snow and I said to Charles that once we leave the summit we were going to be committed because it would be impossible to climb back up. This was my way of making sure he was psyched for what lay ahead. We decided to make lots of short rappels so as not to end up getting the ropes stuck which as it proved would be ultimately faster.
We started down the West Ridge alternatively rapping and down climbing until we reached the iconic Shipton's notch - a key land mark on the descent. We then turned right onto the north face proper and made a series of hair-raising rappels , not least because always the next anchor was buried under snow and had to be chopped out and laboriously cleared with an ice axe. 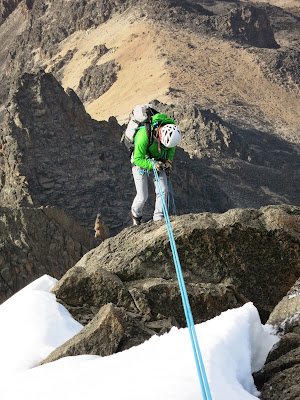 Sometimes I could not find the anchor point and we were forced to leave slings and mallions behind. Slowly we negotiated Firmins Tower and then entered the Amphitheater where we un-roped and crashed down the scree. After 200 vertical meters we turned left to pick up the line of the next set of rappels. After 3 more rappels it was getting dark. on the equator there is no twilight. It is as if at 6.30pm someone switches off the sun. It was now dark but the ground was not now steep enough to Rap so we down climbed some treacherous loose terrain , finally finding the penultimate Rap. The last Rap to the ground is the key one as it is a long way to the side of the gulley and out of the line of stone fall. It is mission-critical that this last anchor is found. Having a very powerful head-torch with good batteries proved to be important. We found the anchor and we landed on the deck at 7.30 pm. 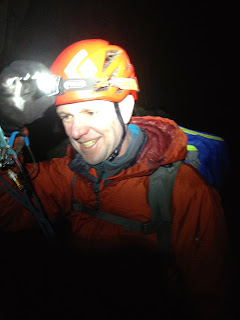 All that was now required was to find somewhere to stop and rest up. We agreed that we should head for Kami Tarn where we knew there would be water.

This was one of those " How hard can it be?' type moments , well it was hard and in hindsight rather comical , but at the time we were shattered . Our quest to find the Tarn was compounded [amongst other things] by the fact the tarn had dried up to resemble a muddy field.
Eventually after two and half hours of stumbling about we found it and a trickle of water.

Every stitch of clothing was donned [ it was very cold] and then I conjured up tomato soup, Shepards Pie , and a pint of tea topped of with a knock-out sleeping pill each. It had been a long day.