Traverse of the Eastern Bernese Oberland

This was an exceptional week of ski touring. Chris Dovell Lia Heisters and I left Chamonix at 6.00am. Chris was good enough to drive. I slumbered and apparently snored in the back. We drove via Bern. It was Easter Monday the weather was beautiful and it had recently snowed a lot. The result was that Grindelwald was packed. It took quite a while to park the car , queue to buy tickets and finally board the world's most expensive train [where all the seats were occupied] and travel up to the Jungfraujoch.
Despite the weather being clear there was a very strong viscous wind which coupled with the new snow meant that there was a lot of wind-slab developing. Our plan was to ski tour to the Hollandia Hut via the Louroiter col 3659m. By the time we reached it the wind was "knock you over strong". Nevertheless we need not have worried about the avalanche risk at the col because all the snow had been blown away!
We skied down the Kranzberg glacier in some difficult snow, before stopping to put our skins on and skiining up to the Hollandia Hut 3158. 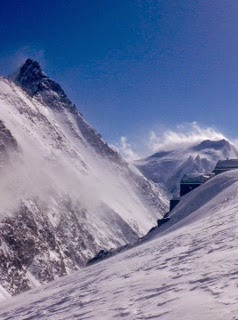 On the Tuesday we climbed the Abeni Flue 3924m This has all the hard work of a 4000er with out the glory. It was particularly hard because the wind was still very strong. The other two parties turned back leaving the 3 of us to battle on. 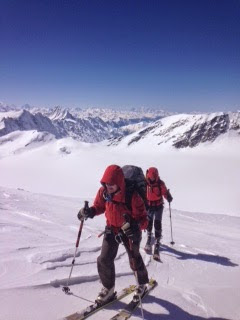 A quick photo on the summit and then we skied down through some tricky crevassed terrain until we arrived on the Aletsch glacier. This is meant to be down hill. but what we soon found out is that its not down hill enough to seemingly ski. We tried poling, skating. All three of us tried a different method because there was not one solution better than the other. Yet eventually we put our skins on for the stretch over to the Konkordia Hut. We stashed our skis under a rock and then clambered up the metal stair case to the hut.[See earlier blog entry] Just then the helicopter arrived with the supplies . The Hut dog was especially happy because his dinner was on board. 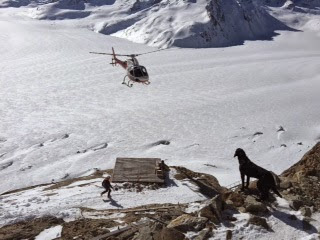 On Wednesday we headed up and over the Grunhorn col 3279m and over to the Finsteraarhorn Hut,but not before making a detour to climb the Wyssnollen 3590m. The wind had now dropped significantly but it had done its damage to the snow. The descent in good snow would have been very good. But not for us. It was challenging breakable crust. The Finsteraarhorn hut was very busy but because it is such a good hut everything ran smoothly and we enjoyed a good evening.

On the Thursday we headed to the Oberaahorn Hut 3256m. This was a comparatively short day. We arrived at lunch time . Th In contratst to the previous night We were the only guests. The hut was still in the process of being opened for the ski touring season. Chris and Lia decided to help clear the snow from the deck. 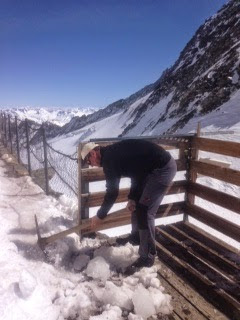 Meanwhile The guardian Christoph managed to drop a critical screw while attaching the satellite dish to the veranda. He got involved in a fruitless but heart stopping search for it. 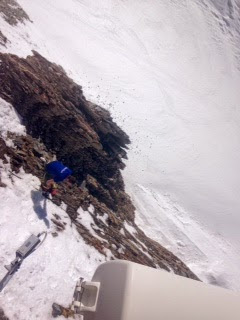 Meanwhile I decided on some "re-hydration therapy" while admiring the view of Matterhorn: 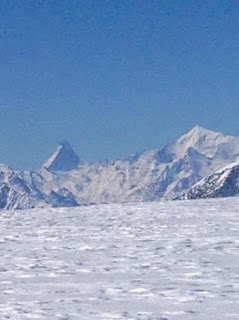 The reason for the short day was partly because the next day was to be big. Very big. Plus partly because we couldn't safely descend the south facing slopes in the afternoon because of the risk of wet slides.

On Friday we awoke at 5.00am. Chris and I then gulped some coffee left out the night before in a vacuum flask . It was then out onto the hut balcony and immediately on to the climb which would take us to the summit of the Oberaarhorn.3629m. Having zoomed up the peak we were treated to a spectacular sunrise. 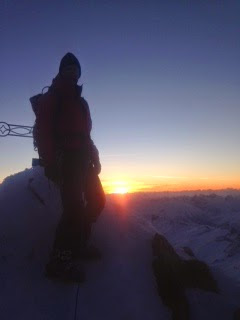 Plus the first view of where our ski descent would take us. It took an hour and fifteen to climb and about half an hour to get back to a delicious muesli breakfast. A quick pack up and then the real challenge of the day started .

We skied down the long Oberaar glacier and onto the reservoir, before deciding that it might be best if we didn't actually ski on its frozen surface. At the end of the lake we had some fun and games negotiating and skiing along the top of the dam 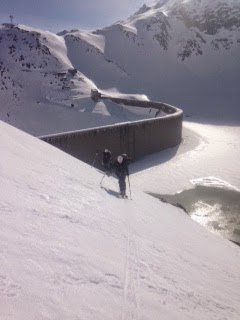 The issue with skiing on the top of the dam was that the railings provided no security due to the height of the snow. 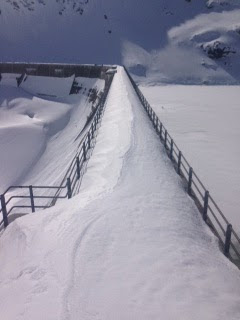 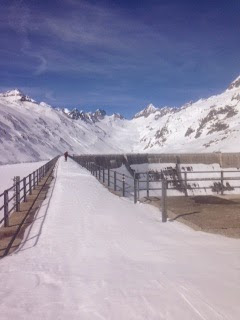 The day was far from over. Where as it should have been comparatively simple to negotiate the road to the Grimsel pass,[1½ hours on the summer sign post] it proved to be difficult steep terrain . So much so that we couldn't easily skin and so we had to carry our skis and post-hole across steep ground. A slight change of plan meant we headed for the Sidelhorn pass. Magnificent wild terrain and views over to the Furka Pass and the source of the Rhone where we did not see anyone all day. 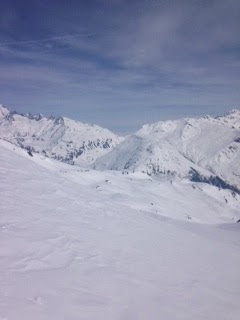 From here it was very good spring snow and then as we got lower mushy snow , but nevertheless snow, all the way to within 10 minutes walk of the railway station at Oberwald 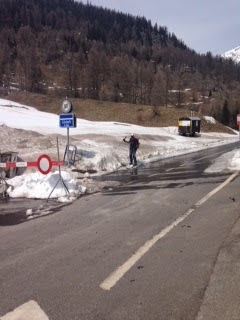