John Young arrived at the start of the week with a really bad forecast. Typical of the change in the equinox. There was 50cm of snow very strong winds which all added up to a very high avalanche risk. The net result was that most of the lifts in the Chamonix Valley were shut. So not for the first time we had to drive through the magic weather tunnel to Courmayeur.
On the Monday we skied off piste in the trees. In some very good snow.

Tuesday we drove to La Thuile. The weather was clear but there was a ferocious wind blowing which shut a lot of the lifts , but we still had many good long runs.

Wednesday we headed to the Petit Croix Baulet above Combloux. The weather was better and crucially it had got a lot colder. 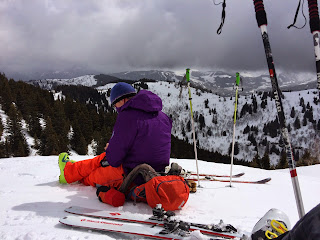 From the summit we skied all the way down to Geittaz always on excellent snow but there were a few interesting streams to negotiate, some giving one or two comedy moments. 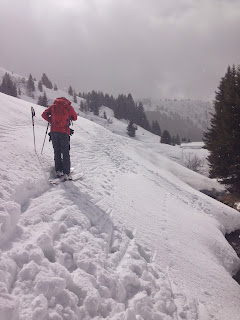 Thursday we headed back through the Mt Blanc tunnel where the weather was perfect. This time we climbed Punte Crocce.

Friday: Funny how these things work out but Friday was the stand out day of the season. We did the traverse of the col du Crochue col du Berard. Everything came together. Some fresh snow over night which critically fell with no wind. Hardly any other parties on the route . 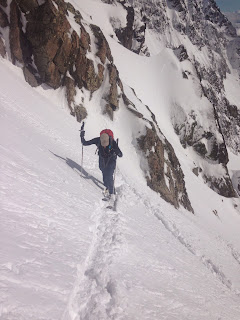 Once we passed over the col du Crochue we were treated to some fantastic skiing. 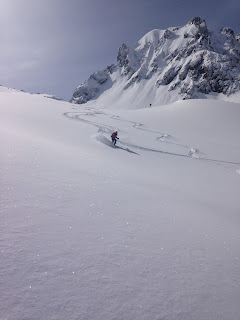 Followed by another skin to the col du Berard 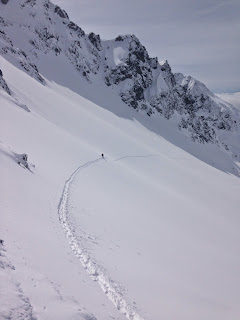 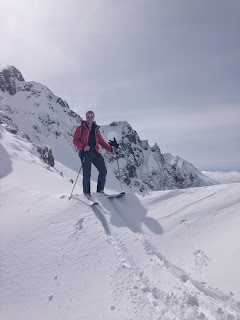 It was then that we were treated to the best yet: No one had been down the valley. There was 30 cm of untracked light fluffy snow. 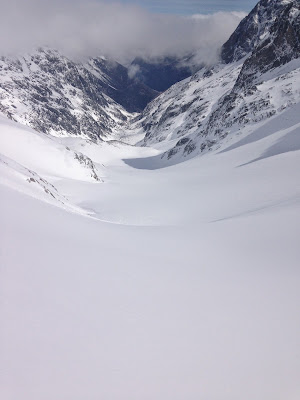 We quickly made the transition from skin to ski mode because we were conscious that with the good weather the snow ould deteriorate. We skied down until the snow changed from powder to spring snow. We stopped had a bite to eat and then continued on down the valley and still continued to find good skiing. 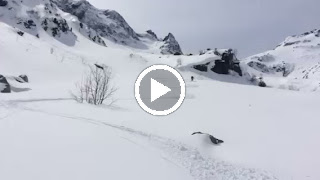