Since before the New Year it had not snowed.  Neither had it snowed in the first week of 2019.

Our planned skiing in and around Megeve was looking like it needed to be relocated. The  Plan B had been discussed in readiness for a venue change. Yet the day before we were due to meet not only did the temperature drop significantly but it also snowed.  Even better, the weather cleared  to reveal close to perfect conditions.

Our group was organised by Charles Sherwood and consisted of  his brother Simon, plus some of his other very good friends Peter Folkman, Simon Allen and Martin Smith. I had skied with everyone many many times although I had never met Martin before.

The first day we skied in St Gervais.  We found some delightful meadows to ski.  There was one particularly good descent in un tracked snow .  The down side was that the run ended up at the foot of a Poma lift [that unbeknown to me ] hadn't actually opened for the season.
Luckily there was a shuttle bus. Nevertheless  it did lead the group to allude  to the   Napoleon quip about his  Generals : Do you want a good Guide or a lucky Guide?
No harm was done and we even got to eat in the  quaint restaurant  Sous Freddy's run by the  Mountain Guide Olivier Curral , who for his sins was once the guardian of the Gouter Hut.  [ Food has improved.]

January 11th We skied in Combloux.  The descents were excellent. 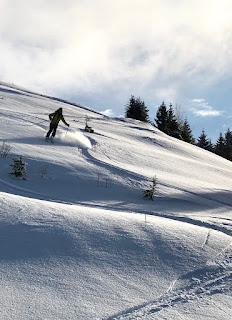 Lunch was at the  Auberge de Bonjournal.  This was all very merry.  Possibly the  "on the house " Genepi was the cause of the days principle accident.  One of the group fell into a ditch while  not rejoining  the piste.

On our final day together the 12th January, our plan for the day was to ride the lifts of Praz-sur-Arly and then ski down into Hauteluce, from where we would take the short bus ride to Les Contamines.  We then planned to ski off -piste from the resort.  Yet when we arrived at the car park the weather was looking like a "jour blanc." I decided that we would be better off skiing somewhere else.  Mind you the indifferent weather did not stop the local balloon festival taking off. Or not, as was the case with the balloon in the middle of the photograph.  This one suddenly fell out of the sky.  It was while driving out of the car park that we saw the balloon  drapped all over a house and the passenger basket had lodged itself in the windscreen of Mercedes- Benz

Instead we skied again in Combloux and Les Geittaz.  The snow was still very good and the trees helped with the visibility.  Yet an attempt to find even more pristine meadows was thwarted by some uncooperative bushes which created much hilarity and the observation that anyone who followed our tracks assuming an uninterrupted powder descent , would at best, be surprised. 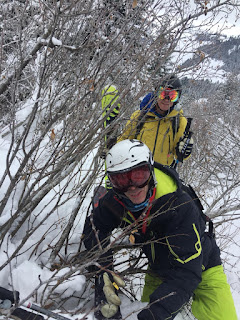 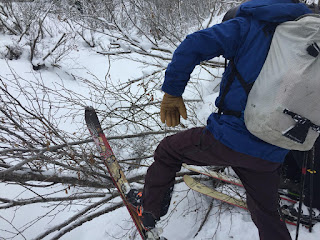 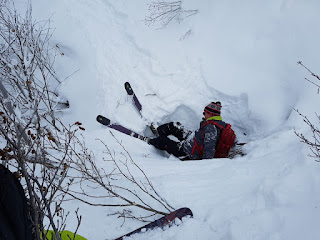