A trip to the Dolomites. 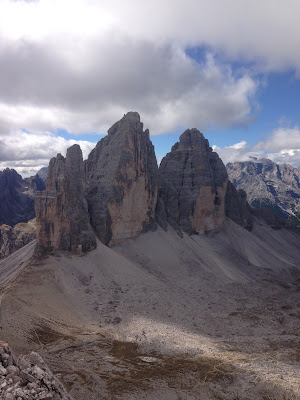 Peter Folkman and I drove from Chamonix to Cortina d'Ampezzo. It is along way. Past Aosta,past Turin,past Milan and then turn left at Venice and head up into the Dolomites. We arrived mid afternoon just in time for a couple of Aperols [Italy's most popular cocktail] sitting in the sunny main square watching the world go by.

On the Sunday we decided to warm up by heading up to the Tre Cima Laverado where we traversed the Paternkofel via ferratta.

This particular one starts in a tunnel. 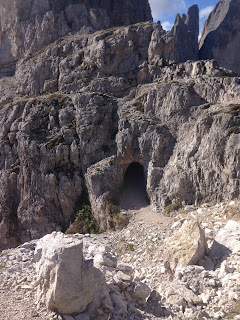 In the past when I have climbed this via ferratta it has proved to be a very good introduction. However unbeknown to me the descent gulley on the far side had collapsed and the route followed a very long detour. The detour was indeed a very fine one and significantly enhanced the quality of the route. However it did spit us out in the wrong valley and consequently left us with a long unwanted walk back to the car.

On the Monday we decided that our legs needed less of a pounding and so we opted to climb on the Cinque Torri where we climbed the uber classic "Via delle Guide" in absolutely perfect autumn weather. In the afternoon we wandered around the outdoor museum where they have rebuilt the WWI front line trenches very close to the climbing. 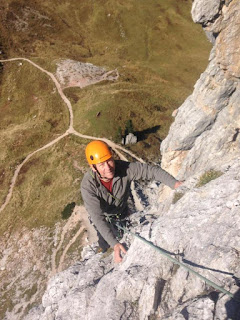 On the Tuesday we elected to head to what is considered to be Cortina's most impressive via Ferratta -Punta Anna. The weather was indifferent but as so often in the alps we climbed through the cloud. 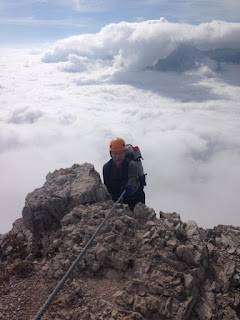 On the Wednesday it lashed it down. We did attempt to visit one of the Messner Mountain Museums but this ended in farce. We arrived at what we were lead to believe was the museum entrance only to discover that it was more complicated than that and involved a shuttle bus [driver? No where to be seen] followed by a walk. Walking anywhere in the lashing rain seemed unappealing. We bailed and headed for Chamonix.

Back in Chamonix on the Thursday we awoke to beautiful weather and a sprinkling of new snow down to the trees below 2000meters.Our plan was to climb on the slabs above the Mer de Glacé.
Our plan was almost thwarted by non other than the French Prime Minister who was on a visit to Chamonix. Monsieur Valls was to be treated to a helicopter ride which was to culminate in him watching a PGHM winching exercise from inside the helicopter.
The winching was on the route Peter and I had chosen to climb. Luckily I am on good terms with Captain Ribbes the PGHM top man in Chamonix and we quickly agreed that it would be fine to climb the route next door. The net result is we got "ring side seats" for the demonstration. 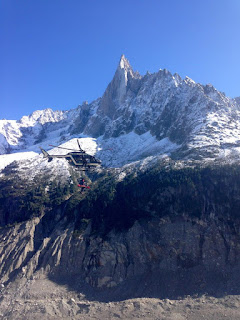 And Manuel Valls got to see some real climbers.
Posted by Mark Seaton at 10:26 am