Traverse of the Matterhorn 4478m 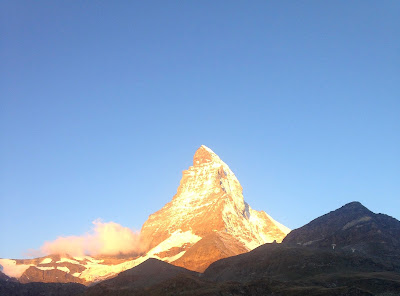 This is an account of an ascent of the Matterhorn via the lion Ridge in Italy followed by the descent of the Hornli Ridge into Switzerland. Our climb was made even more special because it coincided with the 150 year anniversary of the 1st ascent of the Matterhorn via the Hornli Ridge. The first ascent was seemingly cobbled together at the last minute by a bunch of toffs, Swiss and French mountain guides and admittedly the very accomplished mountaineer yet possibly over achiever Edward Whymper. It is extremely well documented that half the team did not make it back. 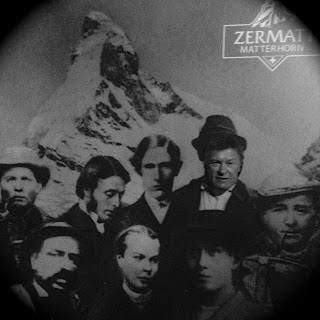 Attempting a traverse like this out of the normal season has its advantages and disadvantages. The clear advantage is that the mountain isn't mobbed by loads of other climbers. Nor is it so warm and often the weather is more stable. The disadvantages are that the route had a lot of late season snow on it. We didn't know if this would make the route more difficult or impossible. In addition the mountaineering infrastructure [cable cars , mountain huts etc] begins to close down.

I say begins, but in actual fact it had already closed down in Italy.Thus leaving us no where to stay and a massive long approach walk to get in position. We started by taking the lift formerly known as the Klein Matterhorn, but now bizarrely renamed the Alpine Glacier Mountain Paradise to its summit and then walked [and fell down] the summer ski piste until we arrived at the very comfortable Theodul Refugio where we spent the night. Next morning we left at about 7.00am and walked down the pistes towards Cervina. A more inauspicious start to our trip is hard to imagine. We were now below the summer skiing and Cervina without snow is not a pretty site. We arrived at the lowest cable car in Cervina- Plan Maison , turned right and started the 1345 meter ascent to the Carrel bivy, stopping en route by the frustratingly closed Abruzzi Refugio to fill our water bottles. [The Carrel bivy doesn't have a reliable water supply.] 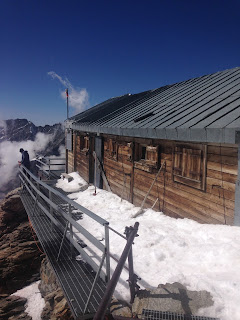 I cannot get my head around the fact that this is only a bivy hut by the fact there is no guardian. It is easily busy enough to warrant one. Despite it being low season it was packed and because there was no guardian to police the place a sort of chaos ensued. It doesn't bare thinking about what it would be like in high season. [Oh yes I remember it was closed because the summer heatwave had precipitated huge rock fall.]

Inside the hut was quite miserable: It was freezing even though Charles Sherwood is looking so happy , in fact his teeth are chattering: 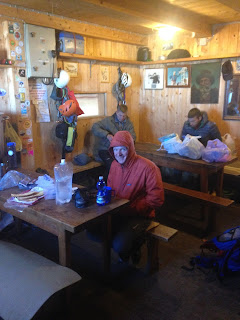 Soon after dinner our moral was "boosted" by the return of party of 3 who had spent 15 hours failing to get any where near the top. Still at least they returned...

Breakfast didn't come around fast enough . We were off at 5.00am. Immediately we were in a queue behind two parties. The first were so scarred of the overhanging combination of rope and chain that they freaked out and were passed by Charles and I and another Guide and his client. Fortunately I decided to tuck in behind this Guide and it was therefore he who took the rock on the helmet and not me. Despite being sick and very dizzy he promised he would be okay and so we forged ahead and immediately found ourselves alone.

The route is consistently steep and intimidating and strenuous. It is far more difficult than the Hornli. Dawn broke and we found ourselves on the distinctive flat section of the ridge before the final very steep tower. Progress along the flat bit was slower than anticipated because it is in fact full of notches that had to be negotiated by firstly climbing down into them and then back up again, while not actually making much useful progress. It was at one of these notches that we were caught up by a soloing American climber. Although he caught us up he was reluctant to pass us and wanted to become my 2nd client of the day. I rather view gaining another client half way up a route is rather like a ship taking on salvage. My solution was to avoid the discussion by dithering around ,fiddling in my rucksack and generally not moving till he got bored and decided he would be better off on his own. 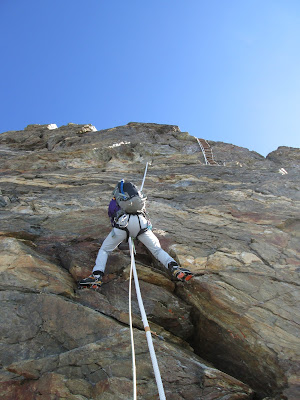 More fixed ropes then an overhanging rope ladder then finally the summit slopes. 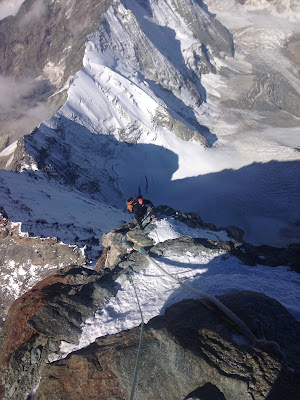 We arrived on the Italian summit at 10.30am and then traversed to the Swiss summit. 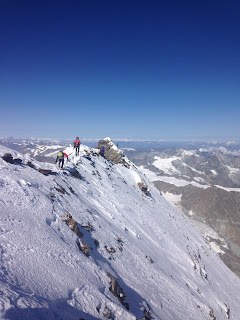 The descent of the Hornli ridge was snowy. However the snow was neve and it actually made it easier than when it is just rock. It also made route finding easier too. We arrived back at the Hornli Hut around 3.00pm stopped just enough time to say hello to fellow BMG Guides Rob Jarvis and Owen Jones who were planning to climb the Hornli ridge the following day.We wished them luck before heading down to the Hotel Schwarzsee where with beer in hand we collapsed.

The next morning we continued on down to Zermatt where we checked into the only appropriate hotel for such an adventure namely the Monte Rosa. The very same hotel Whymper had used when he was planning the first ascent of the Matterhorn exactly 150 years beforehand. 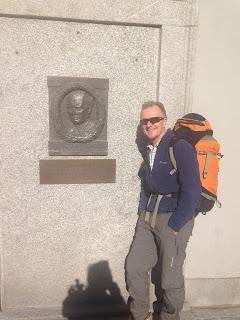 Well done Mark and Charles for a big outing in good style, followed by a good story.

Well done Mark and Charles for a big outing in good style, followed by a good story.