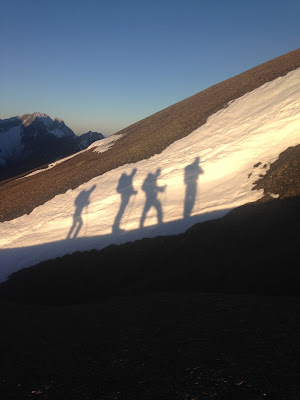 The Dent du Midi is a magnificently striking mountain viewed from a far. The Swiss guide book describes it as an "Extraordinary edifice of stone" especially when viewed from Rhone valley. However nose up it is a tottering pile of crap. It has several summits which make up its ridge of "dents." At each end there is a Cime. The east Cime is pretty much untenable unless it is glued together by snow and ice. If not then a strong belief in ones immortality is a necessary bit of kit to have with you. In the middle is the Dent Jaune . This is an anomaly in that it is a very good climb. I did a few years back in 2006 with my very good friend and client Peter Little whom I did so much exploratory climbing with. At the west end is the Haute Cime - the true summit and can be reached without stepping on a glacier and without specialized mountaineering kit [in the summer]

This was to be our objective. Vin,Tony,Dave and I drove around to Champery, and set off from the Paradis Car park on a beautiful Saturday morning. We walked up through a very uninteresting forest following a very boring path for over an hour. Eventually we broke out of the forest to be treated to beautiful views of Champery and in the distance the Rhone valley. The path then snakes around some cliffs before going through a gorge where you turn left and head up a valley to the Susanfe Hut. 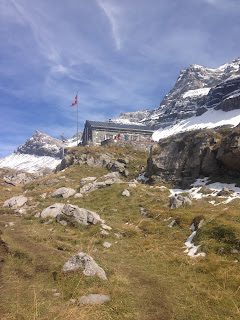 A very cosy and considering it was late in the season ,a very busy hut. We enjoyed a sociable evening and the food was washed down with a couple of bottles of the local rouge. Inevitably we were presented with insipid dessert which seems to be part and parcel of staying in Swiss Huts - This time: apple-puree. Baby food.

Breakfast was at 6.00am and we were away by 6.30am.At this time of the year it is still dark so we set off with head torches and plodded up to the col du Susanfe in just over an hour. 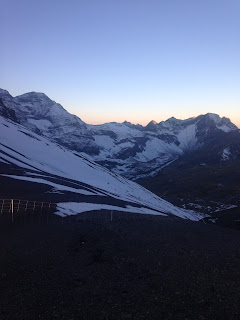 A pause and a drink and we were off up the Haute Cime proper.There was a surprising amount of snow around which did a lot to enhance the scene because without it you could have thought you were on some lifeless planet - acres of shale.

It might be "just a walk" but its over 1100 vertical meters from the hut to the top. It took us a lung busting 4 hours to get there. But it was worth it as the views were very, very good. Mt Blanc to the south. 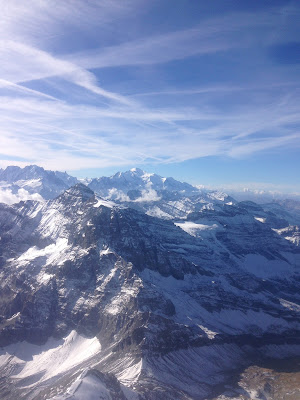 Lake Geneva and the Oberland to the north. 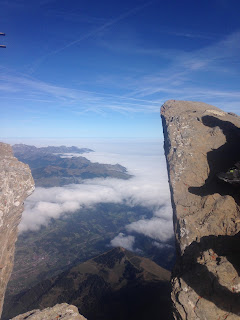 Now all was left was the matter of going home. This was to be a brutal 2000 meter descent, back the way we came, stopping briefly at the hut just long enough to buy some drinks and for the legs to seize up. By the time we arrived back at the car we were knackered. Dents du Midi may be only a walk but you underestimate it at your peril.