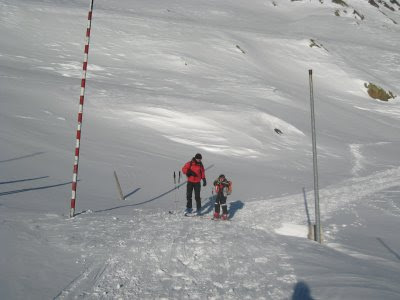 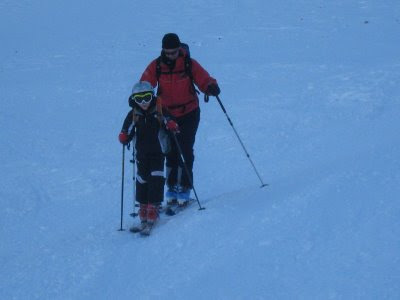 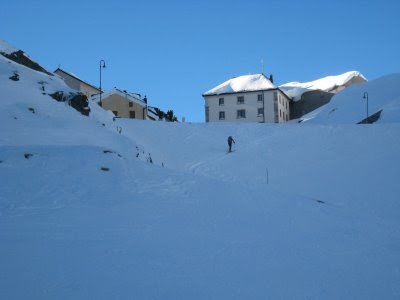 Harvey Dovell plus me and his Dad trekked up to the Grand St Bernard Monastery where we spent a wonderful night, being wined and dined by the Monks. It was cold but still and clear. This morning we skied back down the Comb des Morts had a cup of coffee and then took the Super ST Bernard gondola. from the top we scramled into Italy and then skied the stunning descent to Etroubles. Lunch was at the famous Croix Blanche. We then took a taxi back through the Gd St Bernard tunnel picked up the car and cruised back to Chamonix ending a couple of perfect days adventure.
Posted by Mark Seaton at 5:29 pm No comments:

Back up to Full Speed

I started the winter skiing season with two outstanding days skiing. Tom Xavier and Henry and I threaded our way through the Breche du Crochue and skied perfect snow on slopes which just kept on unfolding in front of us. It was hard to imagine it being better.
Yesterday the boys decided they were up for a big day. We left the house at 7.30am and started skinning at 8.30am well above Sallanches. 1350 meters higher up we peeled the skins off as we stood on the summit of Les Quatre Tetes. We even met the Chamonix Pizza man on the summit.
We then skied the north face. Although the snow was no where as good as the previous day it was okay. We were back at the Land Rover an hour after leaving the summit. It was then that the most memorable part of the day started as I reversed the car down a very icy track and got it well and truely stuck in a ditch covered in snow. Two hours later and some admirable team work we had dug the car out and attached chains to all four wheels, transforming the Land Rover into an unstoppable tractor. The boys did not miss their flights and will be back with their families for Christmas.
Posted by Mark Seaton at 9:10 am No comments: 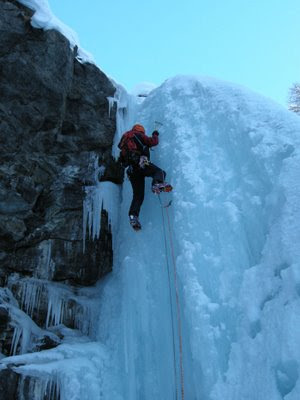 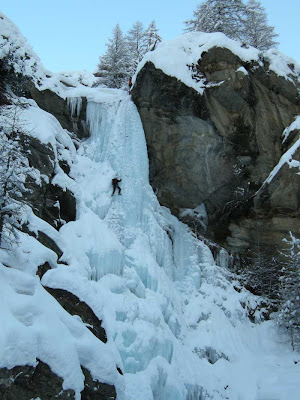 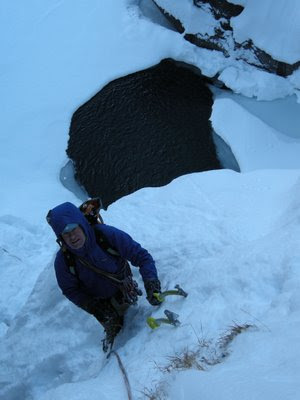 To day Alan Kimber amd I drove through the Mt Blanc tunnel towards Aosta and headed up to the tiny village of Cogne where we climbed the pleasant Cascade du Liaz. Four pitches, one quite steep and one just steep.
Posted by Mark Seaton at 6:11 pm No comments: 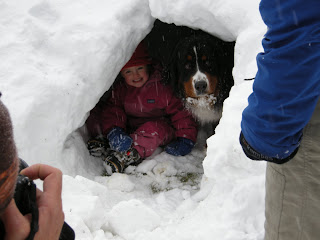 The British Mountain Guides are having their annual dinner here in Chamonix at the weekend and my friend Alan Kimber is staying with us. To day he was out in the garden buildingt snow shelters.
Posted by Mark Seaton at 5:21 pm No comments: