Being in the right place at right time is key to making most of weather windows.

May is the time when the weather settles down after the normally unsettled weather of the equinox. This wasn't the case this May and we have had no periods of settled weather.
So when James Vernon joined me for a weeks ski touring the weather forecast was looking distinctly mixed.
What we decided to do was head round to Grindelwald and take the mountain train to the Jungfraujoch. When we exited from the tunnel the weather was misty and windy and so we headed up to the Monchsjochhutte 3627m which is about 45 minutes skin, still never easy with no acclimatisation.
Despite the Hut being run by a world class Git we had a pleasant evening meeting some very interesting fellow ski tourers from the Valais. 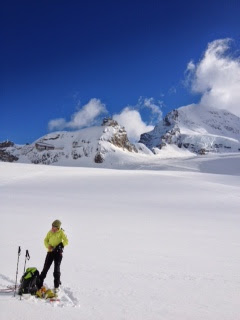 The next morning the weather was fantastic and we were in exactly the right place to take advantage of it. We made a wonderful traverse over the Louroitor col at 3676m before skiing down the wide open slopes of the Kranzberg glacier to join the Aletschfirn glacier. 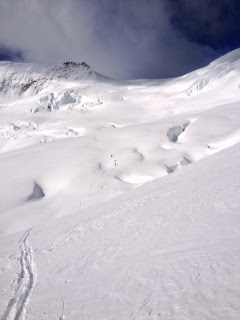 From here we stuck on the skins and climbed up to the very welcoming Hollandiahutte 3164m. 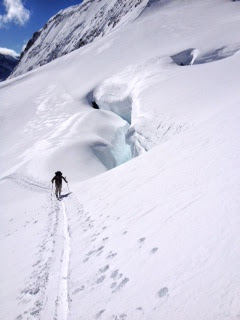 Unfortuanetly Tuesday had been the only really good day and while Wednesday morning threatened to be okay it was in fact very windy and so we decided to ski down the long beautiful , wild valley to Fafleralp where the snow finally ran out and we walked down the road to Blatten where we jumped on the Post Bus.
On our final day we revived James's rock climbing career after a 20 year break. To me he never seemed as if he'd been away. 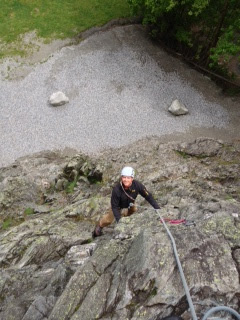 Peter Little and I have climbed together at least twice a year for the last 25 years all over Britain and the Alps. It was therefore only natural that when he told me he was getting married that I should be there.
However the subplot of what happened before the wedding is worth telling:

We decided that it would be good to catch up with a walk up Blencathra , a mountain I had never climbed before. Our plan was to ascend via Sharp Edge- an interesting scramble well known to thousands of visitors to the Lake land fells.

I arrived at Peters house at around 11.30am and we headed off to the start of the walk. As we set off it started to rain and the mist came in. Peter was frustrated for me because he was keen to show me as much as he could of "his" beautiful Lake District . Frankly I didn't care , I was just happy to not be in charge and was just out for a walk.

Now Peter is a member of Keswick Mountain Rescue Team so when a text came through he was obliged to read it. "Guess what ? Some one's fallen off Sharp Edge." Peter announced.

Through the mist we could hear someone shouting for help. Finding the casualty was relatively quick , but actually getting to him proved to be one of the most scary things I've done in a long time. We found our selves on a mixture of super slippy loose wet rock interspersed with equally treacherous vertical grass. Thrown into this toxic mix were some huge cliffs meaning that one slip would almost certainly be your last slip ever.

We couldn't get to the casualty so we reversed our route which was even more terrifying. Eventually we got to the casualty from above via the "Bad Step " on the actual Sharp Edge Ridge. If ever rain can turn rock from grippy stuff to super slippy nightmare it is on Sharp Edge. This was turning out to be no walk.

The casualty had broken his lower leg . Peter and I stablised the situation and then waited for the rescue team to arrive.
Even going as fast as they could they were still obliged to Pitch the Bad Step and belay in the traditional manner. 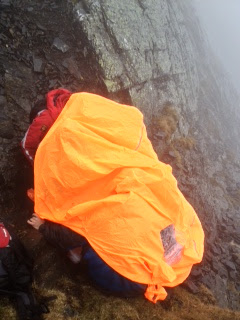 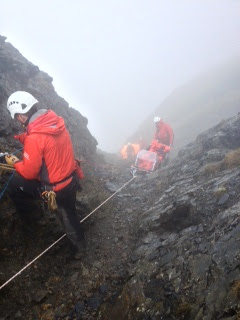 The weather was too misty to get the Sea King Helicopter in to winch and so the rescue team had to do a 150 meter stretcher lower down the cliff to below the cloud level. 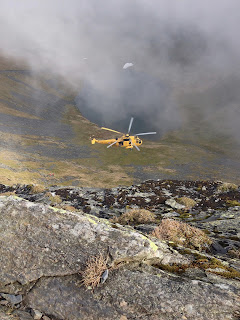 
The next day I met up with Peter Folkman for a wonderful ascent of one of the Lake District's most famous mountain rock climbs: Corvus 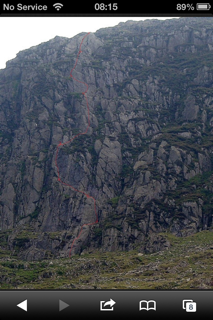 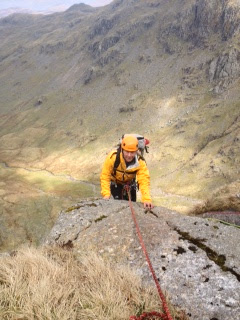 Finally the Wedding Day which was granted Mediterranean style weather. 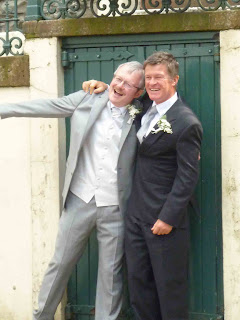 Posted by Mark Seaton at 3:27 pm No comments: