I was delighted when John Young got in contact . We first climbed together in Scotland in 1992 and skied together a couple of times in the early 2000's. I was less delighted with the weather forecast for the week John had booked with me. There had been no snow for about 3 weeks and the conditions were looking decidedly patchy. Then the forecast was for rain!
Nevertheless I shouldn't have worried . It did rain, but only at night and high up it snowed. This gave us regular top ups of snow and fresh tracks everyday.

We started on Grands Montets skiing down the Glacier des Rognons but the really good snow was on the front face where we could keep doing laps and still there was acres of space. 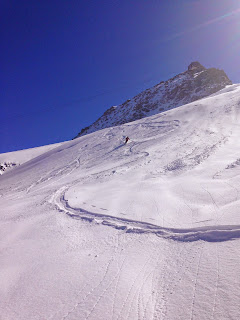 On the Tuesday [after another top up of overnight snow] we ventured into the Vallee Blanche. Again we were treated to untracked snow and a wonderfully quiet experience. 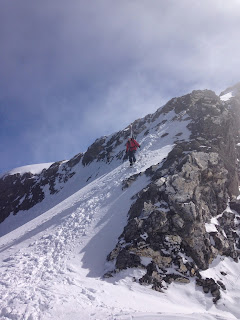 Our final two days we skied off the top of Les Grands Montets again enjoying the regular overnight top ups of snow.
Posted by Mark Seaton at 11:35 am No comments:

Defenition of an adventure is when the outcome is uncertain 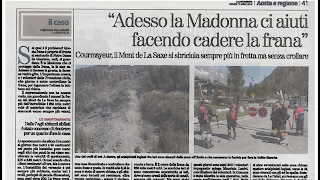 Chris & Lia and I set off from the 1st cable car at Grands Montets where we suffered a very bumpy ski down to the Argentiere glacier. We then cramponed up the 1st part of the col du Chardonnet before sticking on our skins and heading up to the Franco - Swiss frontier. We avoided the massive traffic jam by entering Switzerland by the slightly higher col. We rappelled down the slope and then skied over to the Saleina Hut which was guarded over the Easter week, seemingly for us!
After a very pleasant evening the next morning we set off at 6.30 am . The view back to the hut was exceptional 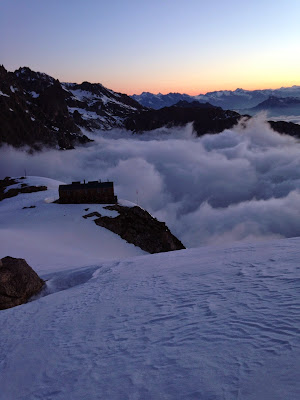 Our plan was to traverse to La Fouly via the 3 cols route - probably the best traverse in the Mt Blanc range. The issue was the slopes were very icy and the key traverse could only be done by taking the skis off and climbing above some intimidating cliffs before we arrived at the col des Planereuses 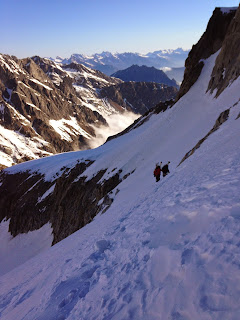 We passed the three cols in very clear but very windy conditions before finally making the very long glacier de la Neuve [and despite the lack of snow for weeks] we skied to with in 10 minutes walk of the Village and our wonderful hotel.
The hotel was good enough to give us breakfast at 6.00am and we were away up to the Col de Ferret. 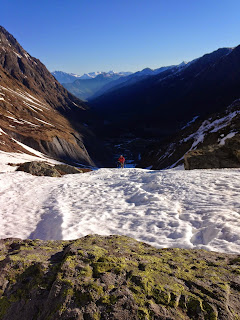 At the col it was time to ski into our 3rd country- Italy and down the long, beautiful Val Ferret. The start of the descent is steep and a lot of care is needed ,then as it flattens out a lot of pushing and skating is required.
Fortunately the snow remained hard and our task was easier than it could have been. We eventually arrived at the road to see the 1st person we had seen all day. He was eating a cream doughnut and drinking a beer which struck me as an odd combination. We asked him if we could get a taxi and his answer was an emphatic no! The reason was the road had been closed for a week. He'd been stuck there [eating doughnuts] and was excited because a helicopter was coming to get him later that day. It all seemed a bit apocalyptic to us.
We decided to walk the 3km to the village not really knowing what to expect. Originally our intention had been to ride the cable car and finish our trip by skiing back into Chamonix via the Vallee Blanche and thus finish our circular trip. What happened was very different. We arrived in La Palud to find the cable car shut. In fact everything was shut- the whole village had been evacuated because of an imminent land slide. We walked into the police road block and some very excited Carabinieri and general Italian chaos which only seems to happen in this wonderful country.
It took them a while to decide what to do with us. Eventually and not before the Press had got involved[see1st photo] we were bundled into a Police van and dumped at the Mt Blanc Tunnel entrance. This turned out to be a very difficult place to leave from without a car and there was no bus allowed to stop. By chance I got into conversation with the Mt Blanc Tunnel Press Officer the charming Erika Noro. She agreed to take us through the tunnel probably to get us out her country.

The next day Lia's feet were shot so Chris and I decided to give our selves a "beasting" by climbing the Aiguille d'Argentiere from the 1st Grands Montets cable car. It is a huge day with over 1300 meters vertical ascent. 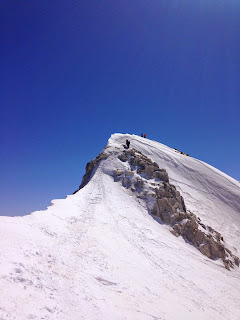 Off course this means lots of good skiing on the way down all the way to Logan all 2100 vertical meteres of it. I was pretty tired after this big day and misjudged how hot it was and suffered a bit from sun stoke.

Yet being too hot was not the problem for our final day- The weather was not conducive to skiing and after all it was difficult to see how we could better the previous 4 days , so we went rock climbing on the long route the voie Caline which arrives at the buvet of les Mottets where after the weather finally changed and it snowed on us... 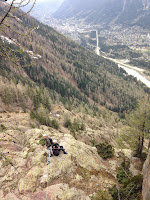 Posted by Mark Seaton at 8:59 pm No comments:

4 days off piste / ski touring with a Tuesday rain blip 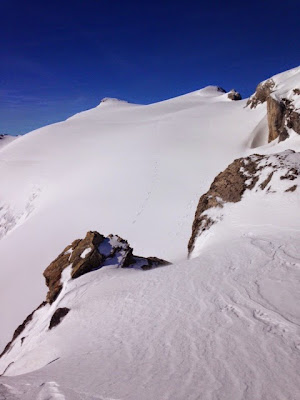 There is no doubt that our stand out day this week was a trip to Les Daiblerets. It is a bit of a trek from Chamonix - [an hour and a half] but it was worth it. Especially at this time of year when it is key to stay high because low down the snow is non existent or it turns to slush too quickly.
Francis and I started at Brevent and skied some good spring snow as our warm up day. Tuesday it chucked it down - the first rain in about 10 days. However we knew that somewhere it would be snowing. By the next day Wednesday it was back to fantastic weather - but with 15 cm of fresh snow high up so we headed for Grands Montets where we were not disappointed. We enjoyed some very good skiing on the glacier.
Then it was over to Les Diablerets for the skiing of the week. We arrived at the col des Pillions at about 9.00am rode the lift to the top , then skinned up to the summit of Les Diablerets

Today the logic said we need to stay high to stand any chance of good snow. There is no where higher than the Vallee Blanche. So while the weather was beautiful , the scenary as dramatic as anywhere , the actual skiing was disappointing and we actually had the worst snow of the week, although still a very good day. It was a pity the bar had been set so high. 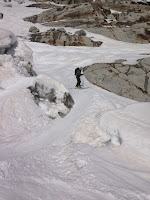 Posted by Mark Seaton at 8:27 pm No comments:

It is not often that pretty much everything goes according to plan. Clearly having 5 days of perfect weather help but in addition good snow , safe conditions, make all the difference. When I say pretty much everything - we didn't get off to a good start because Valdi Gudmundsson , the highly respected Ice Driver from Iceland woke up with a blocked back and couldn't join us.
So Turi and Agust and I sadly left for the village of Diablerets without him.
We climbed the mountain of Diablerets from the lift station of Col du Pillions. From its summit we skied un tracked powder to the Diablerets Hut where we were the only customers for the night.
The next day we took special early cable car reserved for ski tourers and headed over to the Audannes Hut. We had really good safe conditions and the bonus of a great ski down to the Hut 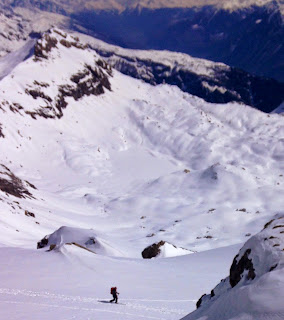 The next day we headed on to the Wildstrubel Hut where for the 1st time ever in a Hut the guardian sat down and eat dinner with us. On our third day we again woke to perfect , but very cold weather , traversed the glacier des Morts 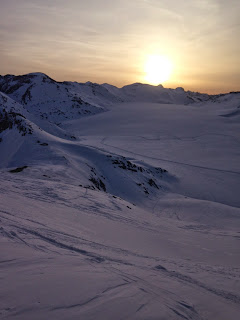 and climbed to the summit of the Wildstrubel, before skiing fabulous spring snow to welcoming Lammeran Hut.
On our final day we left the Hut at 7.00am skinned up to the col behind the hut 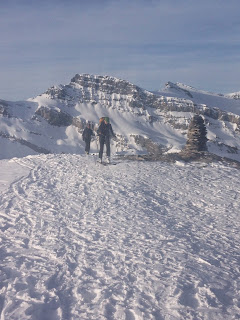 From here we skied all the way down the valley from where a short skin took us up to the Cable Car for the ride down into Kandersteg railway station. So if you want a great quiet ski tour then look no further.
Posted by Mark Seaton at 10:07 am No comments: