A well timed trip to the Dolomites

John Young and I had our trip to the Dolomites in our diaries for well over a year .  It was just as well because any climbing high around Chamonix had been obliterrated by the heat wave, which has made mountaineering unjustifiably dangerous.

We drove to Cortina via Milan.  The roads were markedly quiet.  This was because evryone was in the Dolomites, as the 15th August is a bank holiday in Italy, so most people seemed to just tack on a further four days!

Fourtuantly John had booked us into the the very comfortable Villa Blu Hotel just on the outskirts of the town.  We made this our" base camp" for the first five nights.

This was John's first trip to the Dolomites and so we started on the relitively simple Via Del Guide on the Cinque Torri.  The approach is fast : You sit on a chair lift for about 10 minutes, then you walk to the foot of the route in about 15minutes.  Of course there is a price to pay in that there was the inevitable queue.  Luckly the two teams in front of us set of the wrong way and we were able to get in front and enjoy a good climb in beautiful weather and sublime scenary.  Once we were on the top of the tower we made three rappels and then went to look around the old 1st world war fortifications. 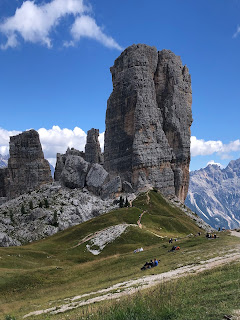 Having enjoyed a good introduction to Dolomitic climbing , the next day we headed for another of the Dolomites classics: The Comici Route on the South ridge of the Falzargo Towers.

Although it could have been very busy we only shared the climb with two other climbers, Erica and Unberto.  They proved to be  good company and we all met up for a celebratory beer afterwards.
During the next two days we had a bit of a weather hiatus.  We decided to sit it out, because the weather forecast going forward, promised to be marvellous.  We had a "council of war" and carved out a plan for our remaining time.  The plan worked perfectly. This is what we did:
On our next day of climbing we drove to lake Misurina, from where we walked up the beautiful valley to the foot of the Tour Wundt. The climb its self was another Dolomites classic with chimneys and cracks.

The Tour Wundt is one of those climbs where there is plenty to go wrong if you don't keep on top of it.  For example the rock is far from perfect and the protection is well spaced, plus the descent from the summit is complicated.  Yet all went perfectly for us.
The climb the next day a little less so.  Our friend of the other day, Unberto, had recommended a suposedly simple climb called  Del Tetto. 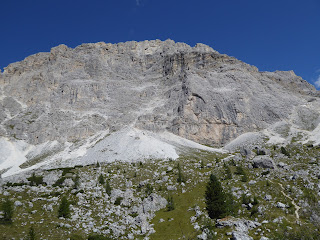 This is situated at the top of the Falzargo pass.  Somthing obviously got lost in translation because it was easy apart from a three meter section which was desperate.  This coupled with an inacurate route description made for a longer day than we wanted, especially because of instead of returning to our delightful hotel, we were booked into the Refugio Lavarado.
Anyway we made it.
We were now in probably the most well known part of the Dolomites the Tri Cima Lavarado.  Our goal was to climb the Cima Grande via the Dibona North East Ridge.
Breakfast was a 6.00am and we were away soon after.  Twenty minutes later we turned a corner and were confronted by our objective:
A further half hour and we were at the start of the route.  There was another pair Ditta and Lucas.  Ditta was an Austrian Aspriant Guide and Lucas was his friend and
"dummy" client.
To begin with the rock was steep and cold.  It took a long time before we were in the sun.

This was a truely magnificient climb, we lost count of how many pitches we did, but by the time we reached the finish we felt "well climbed."
There was just the significant  matter of getting down.  This involves reversing the normal route by making a series of rappells interspersed with lots of down climbing.
Eventually the route splits and it is now possible to follow a new descent line that takes four 30 meter rapells which rather conviently dumps you about a 20 minute walk from the car park.  All in all we were on the go for about 10 hours.  Defiantly the crowning momment of our Dolomite trip.
We spent the night at the top of the Pordoi Pass in the Hotel Savoia. Tired but content , especially after a good meal and plenty of drinks.
The following morning we drove around to the Sella Pass and by some good fortune managed to find a parking slot.  Even though it was only 8.30am the place was heaving.  Our goal was to be the First Sella Tower via the Steiger route. 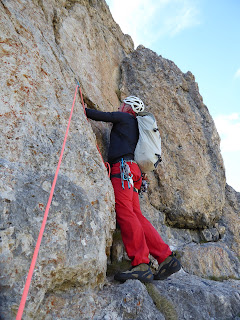 This was a fine way to finish off climbing in the Dolomites. We departed via the Val Gardena and spent the night in the beautiful town of Brixen where we stayed in the Hotel Goldenes Roessi which is bang slap in the middle of the marvellous old town.
For our final climb we drove towards the world famous climbing area of Arco and climbed the 10 pitch route Amazzonia.  This was a significant change of scene.  Not least because it was hot.  Frankly too hot and I was relieved when we finally topped out and found some shade.
Still the actual climbing was superb, with a bolt every two or three meters which was very pleasnat after some of the heart stopping run outs of the Dolomites.
Our final night before driving back to Chamonix was in the Pace Hotel in the center of Arco.  Again a beautiful location in the heart of   lively  old town.
Posted by Mark Seaton at 2:07 pm No comments: