We have had some good skiing in the low resorts while the higher resorts of Chamonix have been trashed by the wind or even shut.  Fiona , Reuben and I headed for St Gervais, where it was still very windy , but we did find some sheltered tree skiing which gave us wonderful powder.  In fact I had never seen it so windy in St Gervais

But there was a reward the next two days we spent in Combloux.  The conditions were absolutely perfect.  Clear skis and powder snow.  The ski down to Giettaz was magical. 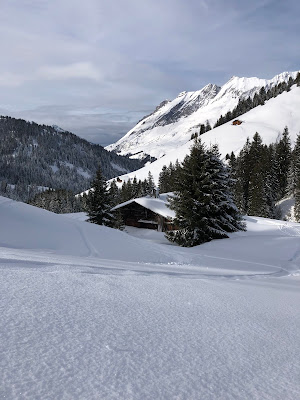 Yet as is seemingly more the case each year the next day it rained and all the wonderful conditions were gone.
Posted by Mark Seaton at 9:25 am No comments:


They returned again...  Not quite so many of them this year as last - injuries, illness and accidents had unfortunately afflicted a lot of them in the preceding year.  Added to which at dinner in Argentiere Steve almost choked to death while trying to eat half a cow.  Luckily an overly enthusiastic nuclear  thwack between the shoulder blades did the trick.  Life carried on and more flagons of rouge were drunk.

True to form this was not the only incident of their trip.   Always in my attempt to be creative and think of new and unusual places to journey, I suggested we went on a massive tour of the St- Gervais, Megeve, Les Contamines ski area.

This is how it "worked":
Everyone was squashed into the back of the Land Rover, a challenge in its self  [which becomes more of a challenge as every year passes,] We  then  drove to St - Gervais. After parking there was the spectacle of them all spilling out of the back.

Next we rode the lifts of the Telecabine du Bettex to the top of Mont d'Arbois. We then skied down the beautifully flattering green pistes to Megeve.  We then  worked our way over to Rochebrune.  The aim was to then carry on around in the direction of Cote 2000.  From the top of the telesiege des Jardins,  we skied off the back of the resort into a picture perfect scene straight out of a Samivel painting. 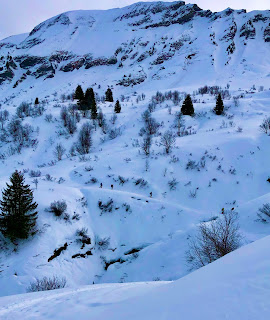 From there we put our skins on and climbed up to the La Croix de Pierre.  At the top we peeled the skins off and started the descent down to Hauteluce.  The skiing was difficult.  The snow was crusty, icy and in places  just horrible.  We did however eventually find a good pitch of skiing . 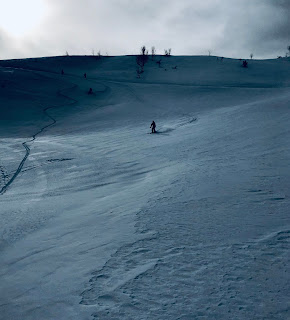 Next was a unique incident which was defiantly a first for me.  While skiing the final section down to the lift station it was necessary to negotiate a farm where I was attacked by a very pissed-off giant goose. 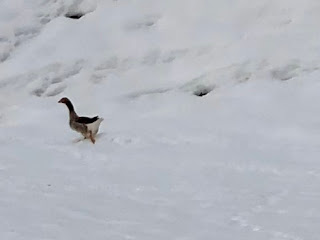 I did at least distract it long enough for the rest of the group to pass through the farm without further incident and we all reconvened at the Val Joly cable car.

The team were feeling well skied after this mega journey.  Fortunately all that remained was to ride the lift to the Col du Joly.  From there it was a mellow ski through the Les Contamines lift system to the bus stop.  Two buses then took us back to St Gervais to within a ten meter walk to the Land Rover.

The previous day did for Pete and Steve which left us James Adam and Kevin.  The weather was a 100% better than forecast and so we decided to do the Col Crochue / Col Berard Ski tour.

This is the  worlds most popular tour.  I have said it before and I'll say it again it :

It's the sort of ski tour that no matter how bad you are at ski touring , it is certain that you will find some one worse than you.  And we did. [ More of this in a bit]

Having said that it is the most popular tour in the world because it is fantastic.  It has everything all neatly packaged  into one trip.


The building of the new Flegere lift has made the start to the day less stressful in terms of actually getting into position, but inevitably easy access means that many more people are being spewed in to the same  area.

Once over the col everyone fanned out and set off for different objectives.  One guide even decided to split his group.  He set off up a different itinerary , the breche du Berard , while sending  a mother and daughter splinter group off one their own to the col du Berard , where we met them .  They were terrified and were totally out of their depth.  They however still were under the illusion that their guide was the best guide anyone could ever have, despite abandoning them with the instruction , all they had to do was ski down the valley keeping the river on their left.

My team were incredulous and even more so when the women continued to think they had employed such a wonderful guide.  It was pointed out to her that there are three rules of mountain guiding .

If this wasn't enough they were indifferent skiers who shouldn't have been there in the first place .

Needless to say we had no choice but to help them down.  Eventually more by luck than judgement the guide was reunited with them at the end of the valley and we were relieved of our responsibility and carried on down the route, stopping at the fairy-tale setting of the buvette at the  cascard  du Berard for a celebratory IPA beer, before skiing down to the train station and returning back to the Chamonix valley.

Skiing conditions are fantastic for the end of the year.

It lashed it down for what seemed like weeks, then it snowed and everyone was happy.  Then along came the Foehn wind in its most aggressive and form.  It ripped up trees around Chamonix and even blew over the newly erected Christmas tree in the centre of town.  The temperatures were weirdly high.  I passed through Grenoble on my way back from Alp d'Huez and the car thermometer read a crazy 20c.  The meter of snow which had fallen in the garden had entirely gone.  Meteo France described it as "remarkable."  It might have been remarkable but it was also depressing.

The ski school and  the Chamonix resort were in full panic mode as Christmas and particularly New Year approached.  The ESF in Chamonix seemingly lost the plot and , sent out an order to all their ski instructors to head down to Les Plannards beginners area and help trample and pack down  what little snow they had so that they could stand a slim chance of having a patch of snow to work on.  The reason for doing this by foot and not by piste-basher was because there wasn't enough snow for it to move on without churning all the snow into mud.

Yet at the 11 hour it snowed .  All was saved.  We got some brilliant off-piste skiing in Courmayeur and then the next day in heavy snow we enjoyed some even better off piste skiing in St Gervais.  Then the high pressure came along cloudless days freezing nights and perfect conditions in the Chamonix Valley and around.