This is the only word I can think to describe the start of the ski season. It is only 8 November. Yet after a recent dump everywhere looks very snowy. The nearest skiing to Chamonix at present is Zermatt. So this is where Scott Todd and I headed. Our plan was to climb the Breithorn 4164m from the highest lift. The trick to getting to Zermatt smoothly is not to get involved with the ridiculous parking and train, but instead to dump the car with Taxi Fredy and get a ride into the bottom of Zermatt. From there we took an electric taxi to the main Matterhorn cable car. This is where things got difficult because the top lift on the Klein Matterhorn cable car was not working. This meant that we would have to stop climbing much much lower down. we rode the gondola to Trockener Steg and put our skis on. We then took the T-bar drag lift all the way up the Theodulgletscher until it broke down! Rather annoyingly we had to abandon it and walk. We took one more drag lift before eventually starting the climb properly at Testa Grigia 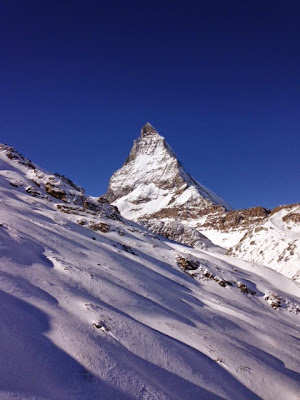 It was quite a tough climb but well worth it. 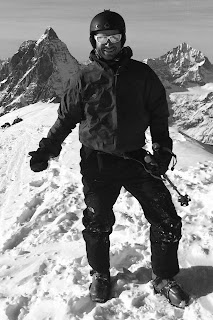 We then stripped the skins off put the skis in down hill mode and skied some very good snow all the way back to the lift station.
The next day after a night in Saas Grund [where we loaded up on some large portions of Rosti] we headed up the lifts of Saas Fee at this time of the year the resort is in high season because all the ski teams are race-training here for the forthcoming winter season. Our plan was to attempt the Allalinhorn 4027m. In the end we made it to just below the Feejoch where a combination of too much unstable snow, big yawning crevasses and a deteriorating weather situation made us stop. This is the photo of our high point 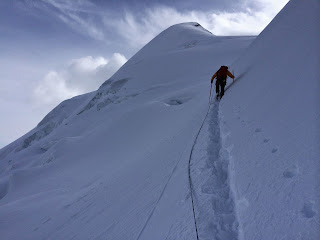 The recompense was some very good powder on the descent. 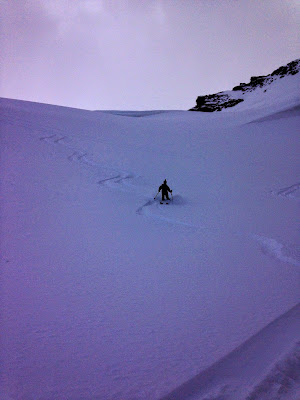 Exceptional powder considering that we shouldn't really being skiing a tall yet.
Posted by Mark Seaton at 4:43 pm No comments: