All the way from America

I first met Scott about 12 years ago. He was on a secondment from the US to Europe. Over several autumn  weekends he would escape to the Alps and we would embark on a variety of adventures from long multipitch rock climbs, alpine climbing, to ski touring and off piste skiing.

We became good friends and he promised he would return with his family.  True to his word he eventually  did. On 27th December last year accompanigned by his wife, Steph and their three children, Laney Jake and Ellie, they arrived in Chamonix, or more specifically Vallorcine...

Scott & Steph were keen to give their children an "immersive French experience" and not stay in a "run of the mill" bland hotel. So they opted to stay in the "Hotel du Buet" in Le Buet.  This was just as well because every other hotel in the Chamonix area was booked out.

Before I continue it needs to be said that the Hotel du Buet is situated in a beautiful area and the staff are very friendly and welcoming, yet it would be fair to say it is a little eccentric. Or as the French might say: "un peu spécial".

This eccentricity provided the Todd's with many stories which they were able to regale with some amusement which are woven into this account.

Anyway, pretty much up until a week before the Todd family arrived the skiing conditions were looking good. Plenty of snow and it was cold. But then it rained and rained... and rained. All the lower resorts such as Megeve were stripped of their snow. Parts of Chamonix lost lots of snow too. It was far from ideal. I started to get rather worried.

An example of this was that the conditions were so fickle that two resorts only a couple of kilometers apart had markedly different snow packs, despite both having simlar south facing aspects. Le Brevent had terrible snow and closed pistes. Meanwhile La Flegere had excellent snow and all the lifts were operating.

Of course with limited options for skiers searching good conditions  La Flégère was mobbed - so having anticipated this the Todd's arrived by train  from Le Buet, thus missing the fight to find a parking space. We had a very good day with beautiful weather and some memorable descents. Plus being accompanied by a "Mountain Professional" meant they could use the priority line, which evidently meant maximising the skiing.

I enjoyed listening to the first story of their first night in the hotel. Fundamentally this involved them not actually receiving any dinner despite waiting in the dining room most of the evening.

Next - A lot of pondering over the weather forecasts suggested that the Foehn wind would blow in Chamonix. This generaly means it will be significantly colder in Courmayeur -Italy.

We left early in the Land Rover [American's love original Defenders!] and drove through the Mt Blanc tunnel. I was given the previous night's update :  This time they had been fed, but not allowed to order pre dinner drinks and not given what they ordered but something entirely different.

Arriving in Courmayeur there were no queues [Americans do Lines] Excellent pistes, real Cappuccinos  and a world-class lunch at La Chaumière was as good a way as any to experience your first ever skiing in Italy.

Next day we were back in Chamonix to ski in its iconic resort: Les Grands Montets. We  awoke to fresh snow. Not much, but it was enough to make it all really silky. The sun even appeared which allowed for some good photographs. The previous evening's installment story did not involve the Todd family directly but a poor fellow guest who was told he was not allowed, to not like,what he ordered for dinner.

We were joined for lunch by  the  ski school's only  Cambridge graduate, musician, Investment banker and Chamonix Ski Instructor all rolled into one person - Andrea.  Ellie and Andrea peeled off and skied together in the afternoon.  The rest of us skied Les Grands Montets off-piste  although the visibility disappeared.

My Swiss ski-spy Alison, provided me with real time intelligence on the state of the Verbier skiing which was excellent.  Critically so deep is her knowledge she promised me that Verbier would be quiet on New Year's Eve...

I trundled over the Col de Montets to pick everyone up at their hotel at 8.15.  I was greeted by a very scary Father Christmas effigy slumped in a chair in the Lobby. He looked remarkably like Father Christmas [American Santa] might look if he had died. We were a little delayed leaving because the toilet door [American bathroom] mysteriously locked Laney inside and no one could find her. She was eventually freed by her mother, the hotelier and a long screw driver.

Despite this forty minutes later we parked the Defender in Le Chable and rode the bubbles up through Verbier and straight on to the skiing pistes. Alison was right it was quiet [well not mobbed like Chamonix]  We then headed up through the lift system to the top of Mt Fort- the highest point in the huge "4 Vallée" system. The view from the viewing platform did not disappoint.

The first part of the descent was a bit sketchy because it was carved out of a series of icy steps, pretending to be a piste. Everyone dealt with it admirably especially Ellie who's previous days ski lesson with Andrea had proved transformative. 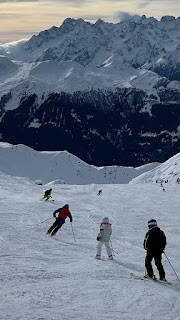 The skiing all day was excellent although it did seem at times that it was like April.  I dropped the Todd's back at the hotel.  They had made the descision that they were not going to eat at the hotel that night but try elsewhere.

The next time I saw them it was a new year.  They had indeed ventured into Chamonix, but were somewhat dismayed to discover that every restaurent that was prepared to feed them [early New Years eve] seemingly only offered a traditional French NewYears Eve set menu.  So if Octopus, Fois- Gras, Oysters were not your children's favourite food you were a bit stuffed.

On our final day we returned to Les Grands Montets.  The weather was beautiful, but the snow was anything but.  It had melted the previous day and re frozen during the night.  The pistes were like boiler plates and the off-piste was like rough  icing sugar.  I decided we should relocate to Le Tour where we were rewarded with some really exceptional skiing which proved to be a good way to end a great five days  skiing . 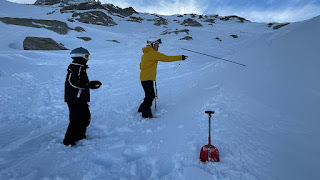