Eighteen years ago was when Stephen Yeates, John Donner and Mike Woolford completed the Haute Route with me.  Needless to say a lot has happened between then and now.

Mike was never coming back, having retired from hut to hut touring.  That left John and Stephen.  Then on the morning we were due to leave John tested positive for Covid.  Only Stephen was left.

The other complication was that the weather had been very hot and cloudy.  This meant that there was no overnight freeze and the avalanche risk had shot up. No matter which way you looked at it, I could not justify setting off.  I had to make the big call and break the bad news.  I then had to work out how we might re jig our plans.

It just so happened that my daughter Andrea was home for a few days and so I asked her is she wanted to join us.  Andrea is a Chamonix ski instructor and has been mountaineering since she was a baby, the added  safety back up of having her along could not be underestimated. 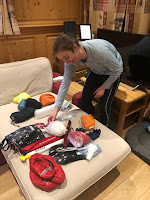 The forecast for the next few days was good and there was now a hard freeze every morning making eveything much safer.  Due to multiple challenges, [avalanche risk, covid and not least lack of  reservations in the huts,] we elected to join the Haute Route in the beautiful village of Arolla.

Firstly we used the drag lift to "catapult" us on our way, then we skinned up to the Pas Chèvre before descending the ladders.  We then skinned across the glacier and climbed upto the Dix Hut.  It has a good mellow vibe these days, the guardian is very layed back and the food, beer and wine are very good.

The next morning we left at about 7.30hrs.  Firstly we had to endure some pretty horrible skiing on boiler plate hard steep snow inorder to get us back down onto the glacier.  The weather was beautiful, yet there was a bitter wind blowing and I lost the feeling in my fingers. 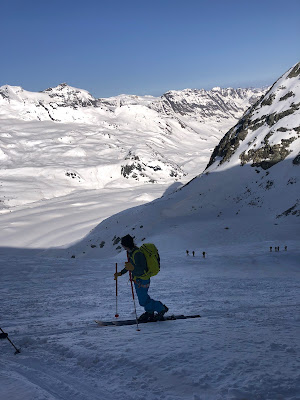 We climbed gradually up into the sun shine and stopped for something to eat and drink.  The next challnage is the Col du Serpentine. Sometimes it is possible to skin all the way to the top of it, but this year it needed to be "boot packed."

The track was in good condition and we quickly negociated the col before making the gentle rise to the summit of the Pigne d'Arolla.

It was then a ski down towards the Cabane Vignettes 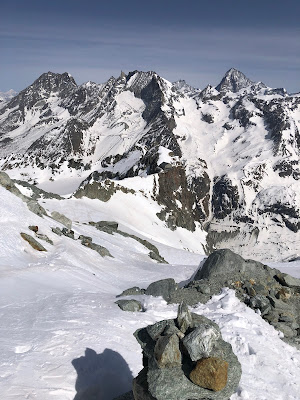 The final ski into the Cabane is tricky, but having good skiers with me made it relitvely straight forward.

Again, a new Guardian at the Cabane.  She had only been there a week.  Mind you the Rosti was as good as ever.  Andrea claimed it was the best meal of her life!

The following morning we a woke at 5.30, Breakfast was at 6.00 and we were away soon after.  It was windy and cold .  We needed crampons on to leave the Cabane.

Only after 5 minutes of skiing there is an intimidating traverse where as a Guide, you absolutely need good skiers with you.  This then leads down onto a flat section which leads up to the Col Eveque in about 2hours. Again it was very cold.  We battled our way across the glacier fighting a strong cold wind, which was  tiring.

We arrived at the top of the col Eveque and stepped into Italy and some welcome sun shine.  We skied down for about 15 minutes[back into Switzerland] on some half decent snow, before stopping again to put our skins on for the approach to the penultimate col , the col Mt Brule.

Again this col needed to be negociated on foot carrying the skis and wearing crampons.  It was straight forward with a line of steps up it.

A 5 minute ski was again followed by the long climb to the summit of the Col Vallpeline.

All that remained was to ski the huge Stockle glacier , then ski under the north face of the Matterhorn before eventually picking up the piste at Staffel and then skiing into Zermatt. Always  big final day. Yet is still one of the most rewarding.


Sometimes refered to as the Gd St Bernard Monastery, but more commonly refered to as the Hospice de Gd St Bernard , either way it is on of the most incredible places you could hope to visit on a pair of skis.  I have been lucky enough to stay many, many times, in all sorts of weather, but this was the first time I had to go in a Sarah sand-storm. It left the snow looking brown and not a little apocalyptic.
On this trip I was joined by Diana, Charlie, Cordelia and Mike. Only Charlie had been before and he was keen for his friends to experience this wonderful place too.
We left Chamonix and drove aound to the road head at what use to be the Super Saint- Bernard lift , which is now sadly defunct.  We arrived to an unpleasant scene of sand and snow blowing around and buffeting the car.  I immediatly turned around and drove into the deep dark foyer of the Gd St Bernard tunnel where we were able to gear up in the dry before eventually braving the wind and heading off up the track to the Hospice, in less than glorious weather .
At the first shelter I decided this was a good place for lunch.  We were all happy to get out of the wind for a while .
We then continued to the next shelter where we again availed our selves of its "ammenities."
Everyone was more than happy when we got our first sight of the Hospice and even happier when we could shut the massive oak door behind us leaving the weather behind and enjoy the majestic silence.
We were welcomed with the traditional Hospice tea, before I retired for an afternoon's snooze and the rest of the team went to explore the chapel and the museum.  Dinner was very convivial, although the Dole left me with a rather "thick head."
The weather forecast was more or less correct- the next day was clear and there was little wind , but it was way too warm. It had snowed over night, but not light fluffy stuff. No , instead,  it was like cement, not white but a brown sludge.  We were away first and it only took a couple of meters to realise I'd not been  smart being in pole position. Mind you at the speed I was breaking trail it did not take long for other teams to catch us up and then they naively over took me and immediatly started to suffer.  I saw no reason to try and catch them up...
Our goal for the day was the summit of Mt Fourchon. We made slow but steady progress and eventually   left our skis just below the summit before scrambling to the top.
The ski down was not the best:  Sand on top of snow, it was soggy and leg sapping.  Still the team were all very good skiers [Thankfully.]   I attempted to lift their moral by pointing out at least we werent on Snow-shoes like many of the other parties.
We then plodded back the way we came , arrived back at the Hospice ,peeled our skins off and then skied back to the road head.
Posted by Mark Seaton at 2:03 pm No comments:

Certainly when I went to school I do not remeber going on an outing quite like this.  I was one of four Mountain Guides, four school teachers from Aiglon College who accompagnied 15 adolescents on a two night, three day ski touring expedition.

We all conveyned at the school, where we distributed and checked  the equipment - transceivers, shovels, probes etc.  We then walked the short walk to the ski lift in Villars where everyone picked up their skis from the local hire shop. We split into two groups .  Terry was the lead Guide and I brought up the rear. We then skied through the lift system to Diablerts.

After which we took the shuttle bus to the Col des Pillions and rode the enormous cable car to the middle station before dropping down to Les Cabane des Diablerts where we dumped  all our overnight kit before skiing around on the glacier.  We finished by doing a short ski tour of about 20minutes just to check all the equipment was working properly.   It was beautifully remote.

We arrived back at the Cabanne and settled in for the evening and enjoyed a spectacular sunset.

The next day was to be the big day and the main goal for the expedition.  Namely to climb the mountain of Les Diablerets , the highest mountain in the Canton of Vaud.  The weather was perfect, if anything a little too perfect because it was very hot and some of the kids struggled with the heat.

Nevertheless everyone, eventually, reached the summit.

We then all skied back into the lift system where everyone inhaled  a huge 2nd lunch before some of us went to explore the spectacular bridge recently built between 2 summits. 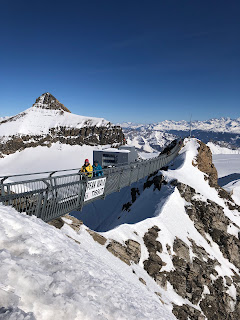 It was then back to the Cabanne for our second night.  In the morning the weather was not so good.  It was very windy and the resort was shut. We therefore had to escape by skiing down to the road head and catching a bus back to Les Diablerets, where the weather was much kinder.  After lunch Terry lead the group on a long off piste run through some beautiful terrain , where we eventually arrived back at the piste which ends about a quarter of a mile from the school.  [Only in my dreams do I remember my school being at the bottom of a ski piste. There again my school was in Stockport.]

Posted by Mark Seaton at 3:49 pm No comments: