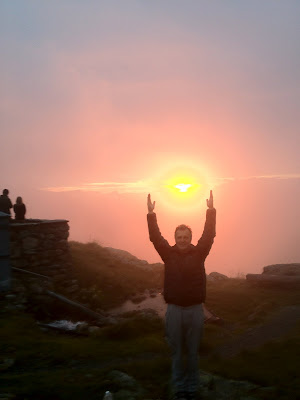 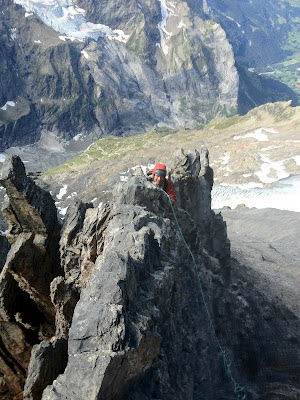 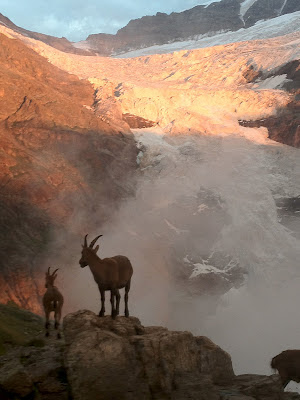 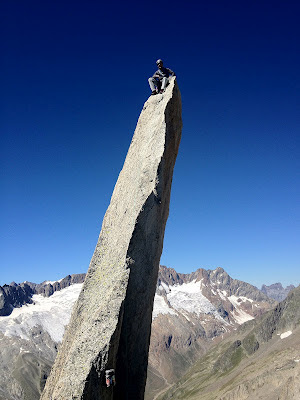 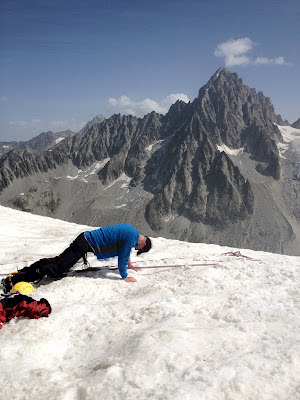 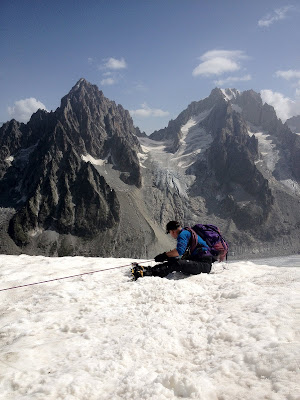 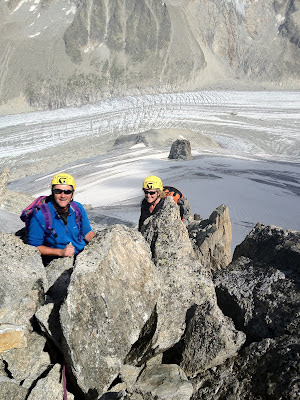 After a long time and children grown up Helen and Martin Whitehouse had decided to restart their mountaineering careers. They hired me to brush up on their skills and look at how equipment and techniques have evolved.
The weather was blisteringly hot and conditions in the mountains were poor because everything was melting and falling apart.
We started our 3 days together by kicking off on the Mer de Glace making sure Helen and Martin knew all there was to know about modern crampons axes and ice screw belays.
Day two: We headed up the Grands Montets where we spent the morning working on crevasse rescue. In the afternoon we climbed the spectacular Aiguille du Grands Montets Ridge.
Day three : We traversed the Aiguille du Crochue. We moved very quickly and so I decided to hand the rope over to Martin and Helen so that they could perfect "moving together" under their own steam. Finally in what has become a bit of a tradition Helen and I swam in Lac Blanc. Unfortunately Martin was too much of a whimp to join us.
Posted by Mark Seaton at 10:13 am No comments: 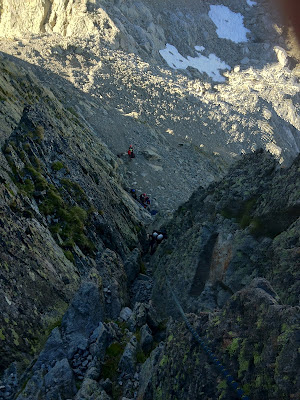 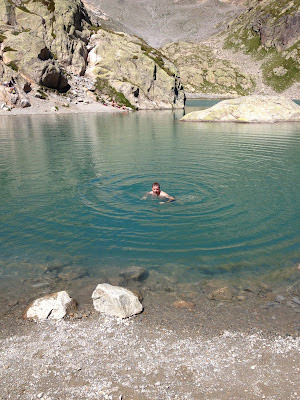 Ariel and Antony enjoyed a cloudless windless traverse of the Aiguille de Crochue - Antony had climbed it before but this was Ariel's first introduction to alpine ridges. It is difficult to say which he enjoyed most the climbing or the swimming in Lac Blanc on the way down.
Posted by Mark Seaton at 7:03 pm No comments: 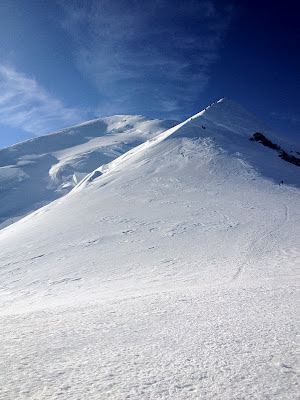 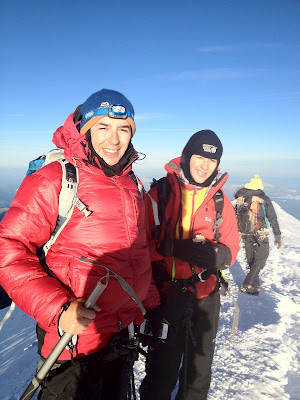 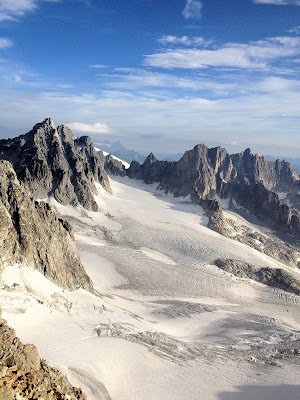 Jason Donavan and his son Lloyd joined me for a week of perfect weather and perfect conditions. We started our week with a visit to the Mer de Glace so that we could have some detailed preparation using ice axe and crampons . We talked a lot about what would happen in the week ahead as well as working on short roping techniques.
The next day we headed off up Les Grands Montets and climbed the Aiguille de Grands Montets before scrambling over the railings on to the viewing platform. In the afternoon we made our way over to the deliightful Argentiere Hut. We sat on the terrace drinking beer and soaking up the impressive situation. It was a very relaxed evening the hut was only half full despite it being Saturday night and the busiest week of the summer season.

We were away by 5.15am the next morning and climbed up to the Col du Tour Noir where we enjoyed stunning views east into Switzerland. From the col we returned back to the Hut and then headed down the Argentiere glacier and were down for 2.00 pm. Our acclimatisation completed plus , plenty of time for a good rest before the challenge of the next day which was going to be the climb to the Gouter Hut.

The climb was even longer than expected because unbeknown to me the 8.40 am train had been cancelled. So an extra 2 hours on what is already a long day. We arrived at the Gouter Hut at 3.00pm. Even so the conditions in the Gouter Couiloir were very good. There were no falling rocks and virtually a foot path across.

Breakfast was at 1.30am and we were away by 2.15am. We had perfect conditions and we summited at 7.15 am. After some photos it was straight back down. We were extremely quick back at the Gouter Hut in under 2 hours. Then the long descent - over 2700 meters.

Posted by Mark Seaton at 5:04 pm No comments: 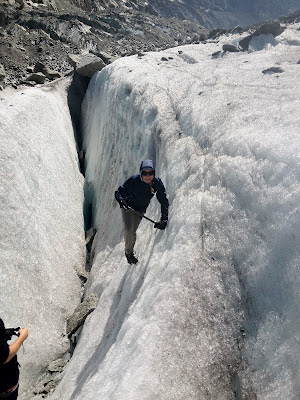 The best out door shops have the best staff. Staff who know what kit does what how it works. This way they can recommend the correct equipment. With this in mind Adrian & Jad from Stamos Sports in Argentiere joined me for a day on the Mer de Glace
a dry glacier where they could learn everything there is to know about Ice axes, crampons, ice screws, rope management, steep ice climbing, rescue and route finding.

It was their chance to evaluate the latest gear and gave them a much better idea of what works easily and well and what does not!
Posted by Mark Seaton at 3:39 pm No comments: