Again if you want a very good climb in a unique position high above the Emmosson Dam and you want to have the route all to your selves then head up to the Aigulle du Van.
This is what Chris Dovell and I did. Chris was fresh back from climbing Everest where his rock climbing skills were by his own admission under used.
The climb is on brand new bolts and is 7 pitches long. The descent is via a scramble off the summit back down to the Bar for a beer before heading back to Chamonix.
Posted by Mark Seaton at 9:54 am No comments: 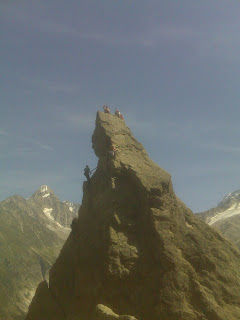 Albert Arthur and their Father Chris joined me for four days of alpine rock climbing. We had stunningly good weather for the entire time. If anything it was rather too hot at times. Especially when we climbed the stunning Aiguilette de Argentiere.
Posted by Mark Seaton at 8:05 pm No comments:

Vanessa and Steve had completed a considerable amount of mountaineering both on skis and on foot. Nevertheless they felt had been left with a feeling that all the Guides who had taken them on their trips had provided them with great experiences but had taught them very little. They were very keen to go back to basics and learn the fundamental skills that underpin all mountaineering. We spent two days together: The first was on the Mer de Glace learning everything there is to know about crampons and ice axes plus belaying on ice.
My brief for the second day was to teach them the skills of safe crevasse rescue. We went to the top of the Grands Montets, found a suitable crevasse and the Steve and Vanessa took turns to jump into it while the other fished them out. They proved to each other it was possible to extract someone from a crevasse entirely on their own but it was not something they ever wanted to do for real.
Posted by Mark Seaton at 7:40 pm 1 comment: