Salbitschijen-south ridge. A contender for the finest alpine rock climb?

July was a terrible month from a weather perspective.  It rained incessantly, it was cold, it never seemed to actually get light.  In the mountains it snowed - a lot.  I was actually quite relieved that I did not have any obligations to try and go climbing.

Then the Covid restrictions were relaxed and it became possible to travel from the UK to France.  This conincided with a change in the weather which was now predominately dry.  The previous bad weather meant that the mountains were still "glued" together, the glaciers were in great condition with plenty of snow cover.

Everything was finally slotting into place. John Young was a head of the queue seemingly the only British alpinist to make his way to Chamonix.

We started our time together by warming up on  a new climb on Le Brevent.  Spitomaniak 5c.  The issue was the weather wasn't great - It was misty - so finding the start was a bit difficult.  By the time we were near the top it was spotting with rain.  By the time we had finished it was raining - but we were pleased to have sneaked in a route.

The next day we returned to the Brevent and climbed the very good Crakoukass 6a again in misty conditions but this time the rock stayed dry.

Next we headed through the Mt Blanc Tunnel and went to climb the Salluard route on the north face of the Aiguille Entreves.  The weather was beautiful and we had the whole place to ourselves . 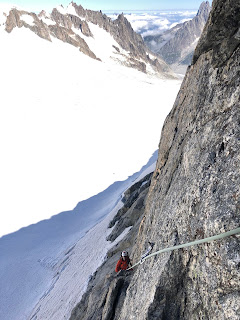 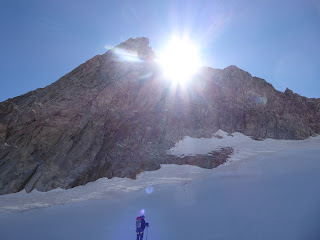 With all this alpine rock climbing under our belts we felt we should use it to climb something new and significant.  So we headed to Andermatt - to the The Furka Pass.  We headed up to the Albert Heim Hutte.

The last time I had been at the Hutte there had been a bit of a "to-do" :  The guardian fell over a wall and broke his leg. Since we were the only people there , it was left to us to sort out the helicopter rescue.  There was no such drama this time. Plus since my last visit the Hutte had been completely rebuilt and was unrecognisable, inevitably it had lost its quaintness but gained an inside toilet.

The next morning we awoke at about 4.00am.  There was thick damp mist which was almost rain.  It didn't appear too inspiring - but the ability to recheck the weather forecast via our phones confirmed an improving weather forecast and so off we set.

We climbed the South Ridge of the Gletschorn.  Via the Lochmatter route.  A wonderful classic ridge. It was a big day and by the time we were back a the car we had been on the go for 10 hours.

So the hotel was a welcome relief .  We stayed at the  comfortable Handeck Hotel where we enjoyed  gourmet food and a relaxing evening.  This was important because our plan was to walk to the Salbit Hutte inorder to climb the south ridge of the Salbit.  This is rightly considerered one of the finest alpine rock climbs in the alps - if not the world.  It is truely incredible .  But having such a reputation it is also often horribly busy.  Especially at the weekends.  Yet deliberately missing the weekend and the fall out from Covid meant we had a free run - there was only one other party on the route behind us.

Again we set off in the dark , but this time we could see the stars, the only cloud was well below us in the valley. 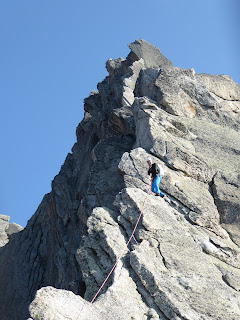 The climbing along the ridge is sublime, but it is the final summit pillar that has to be seen to be believed.

It is also intimidating because there is no protection until you reach the summit.  Plus there are no holds to speak of.  Yet the photo oppurtunity is great.

The descent is down the back side of the mountain. It is well waymarked with paint splotches, but still considerable care is needed and lots of concentration.  We arrived back at the hut two hours after leaving the summit and twelve hours after setting off.  It wasnt a difficult descision to stay a second night in what is a delightful Hutte , with great service, a good guardian, delicious and food plenty of wine.

The next day we left at a relaxed 8.00am and walked back to the road where we had left the car. By the car was a beautiful river which was perfect for a reviving dip.  After which we drove slowly back to Chamonix.