Rite of passage? Its a bit like ski touring only different.

If you come to the Alps for your holidays the one word you never want to see on the weather forecast is Foehn.  This is the southerly wind that brings poor weather to the southern alps and awful windy erratic weather to their  northerly aspected slopes .  If you have come to ski-tour it is even worse as it generally always transforms the snow into unskiable crud.

If you come from Perth Australia for the week and the Foehn is blowing then it's a potential disaster.  This is just what Harry and Ben Hewitt did.

In addition, the choices for resort skiing in the Chamonix Valley have been sabotaged by either the early closing of the lift stations, setting fire to them or actually demolishing them.  [See earlier blog "Resort with Issues" for context.]

Our first day was to be a "shakedown day" after Harry and Bens considerable journey.  We skinned up to the Col de Rachasse on Les Grands Montets in indifferent " jour blanc" conditions.  The ski down was without doubt one of the worst of the season:  It was difficult to see, it was difficult to ski, there were big crevasses and the wind howled.
Still we had checked all the equipment worked and gained some valuable acclimatisation and they had found their ski legs for whatever adventures lay ahead.
The weather forecast for the next few days was for continued Foehn.  Experience told me that if we were going to do something of significance and memorable we needed to get away from the local weather and we needed to go high and stay high.  I decided we should head for the Western Bernese Oberland and head to Les Diablerets with the aim of ski touring along the Western Bernese Haute Route.

As we drove over the Col de Forclaz into Switzerland it was obvious we had made a good choice as the mountains along the southern bank of the Rhone valley were socked in with cloud while the northern side [ our side]were clear.  The mountains were in bright sunshine, but it was still windy.  Even as we pulled up to the parking at Glacier 3000 we were warned the station  might close at any given moment.

Luckily it did stay open and we eventually managed to at least get to within a hundred meters of the summit of Les Diablerts peak before the wind became too strong.


We skied around the top of the resort before making  our way down to the Cabanne Prarochet, where we were the only guests.

The next morning it was clear.  Just across the valley to our south it was shrouded in Foehn cloud.  There was not much wind, but it was forecast to increase.
We skied of down to the Col du Sanetsch and then started to climb up the Arpistock ridge at first on skis and when the snow ran out on foot carrying our skis on our rucksacks.  The wind started to increase.  Then the wind built some more and then it became quite annoying making us stagger around like drunks.  Neither was it helped by having the skis on our backs acting like sails. Progress was slow.
We finally got to the top of the col and instead of immediately putting our skis on , we ran down the hill and sheltered behind a big rock.
After a short ski [they are never long ski touring] we started the long climb to the Col du Puce on the shoulder of the Wildhorn.  Far above us [not that we knew it at the time]  we saw the only people we would see on the entire ski tour. A Swiss Guide with three  local clients.
The wind was quite manageable but the slope was steep and the snow was hard.  Progress was slow and carefully made.
At the col we could see the Cabanne Audannes.  A very good ski down on spring snow took us to the front door in about 20 minutes.  The group we had seen earlier were the only other guests.  Seven of us in total.

The next morning was beautifully clear with just a mild breeze, nevertheless the forecast was for it to increase...
The other party  had had enough of the previous days  wind and choose to head down.  We decided to press on to the Wildstrubel Hutte.  We climbed over the Col des Eaux Froid, climbed up a little further and then skied down dramatic steep open terrain before joining the long skin along the Plan Rose.

Then the wind  commenced. At first it was actually helpful because it blew directly into our backs so it propelled us along. Nevertheless although our direction did not change, the wind veered through 180° and  simultaneously ratcheted its speed up enough so that it was continuously knocking us over like skittles. It was all quite attritional and none of us could hear what the other one was complaining about.
Unsurprisingly we were pleased to close the Wildstrubel Hutte door on it.  Equally unsurprisingly we were the delightful Konrad and Maxi only guests. *


The wind built and built all evening and all night.  It clocked 130kph.  The noise kept us a wake.
The next morning was beautifully clear yet the wind had not really decreased. It was clear that we could not continue with our objective which was to traverse the Wildstrubel mountain.  Nevertheless it was far less clear if we could even safely leave the Hutte given the ferocity of the wind .
We had breakfast at 6.30
At about 7.30 we were outside doing battle with the wind .  Our new objective was to try and get down to Crans Montana.

At first we struggled but once we made it over the first col onto the glacier de la Plaine Morte basin everything was much more straight forward .  Our reward ? Stunning vista's in every direction.


We eventually picked up the pistes [closed  for the season] and skied all the way back into Crans Montana.

Almost ...
Back in Chamonix it was still horribly windy.  So much so that the "Musilac" rock festival  had to be cancelled because the stage blew away.  The forecast for our final day together was in a word Crap.

However it snowed overnight and the morning weather was okay. Still, true to form Les Grands Montets were shocked by this phenomena of fresh snow in a ski resort and were slow to open, yet despite their best efforts they could not ruin an excellent  morning of skiing un tracked powder. 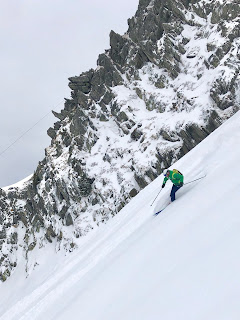 *The hut guardian told me the other guests for the evening had set of from a different Hutte.   They had climbed the Wildstrubel,  but had failed to locate the correct descent and had ended up stuck above some cliffs .  They were rescued by helicopter...
Posted by Mark Seaton at 9:02 am No comments: