I was a mildly dissapointed that there wasn't room in the helicopter for me for the final flyover shoot. The doors had been taken off the Lama III, the camera man , Simon, had been clipped into a hard point on the helicopter and Alex the Producer had had his seat belt buckle duct taped closed.

I was anything but dissapointed when the Italian Pilot then produced two opinel knives and explained that "when we crash, sorry I meant to say IF we crash, it will be easier to cut the webbing than fumble with the buckle/carabiner."

My personal experience of Opinel knives is that they are difficult to open at the best of times. It would be hard to imagine what it would be like doing this in a helicopter rotor failure crash situation.

In addition ,I did ponder that it made a mockery of all the risk assessments , carefully prepared "Method Statements" which I had been involved in prior to leaving for the job. 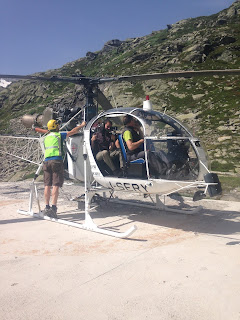 They did take off and fly around for about 10 minutes before returning , re fitting the doors , collecting me and then we flew back to the Antrona football field where the adventure had started 6 days ago. It concluded a fascinating week in which I had been part of a 3 man team filming the Ibex which climb on the Cingino Dam.

The first issue was how to get all our kit into place using a helicopter , but without scaring the Ibex off the dam. [Apparently Japanese film crew had done just this: landed the helicopter at the dam and ended up scaring all the Ibex away with the net result of nothing to film all week but a dam.]

The solution was to fly up another valley and then enter our valley via a 2700 meter long miserable wet tunnel where wearing a helmet was [in my case especially,] a very good idea. 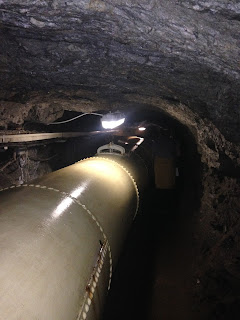 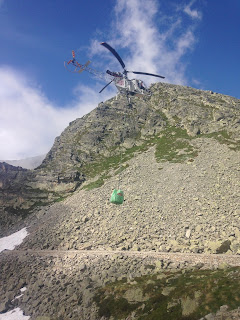 "All" we needed to was lug the stuff back to what would be our home for the week the Cingino Dam Engineers House. 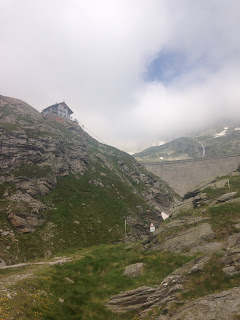 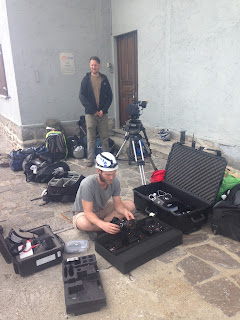 This was fairly knackering . Mind you the plan worked because the Ibex didn't seem too bothered and they were on the dam for an afternoon of salt licking. [Salt licking is apparently why they go to such extremes of climbing the dam] 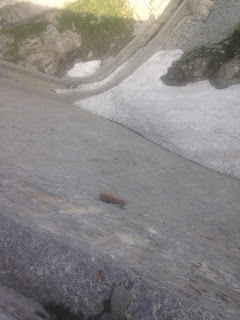 Next on the agenda was to rig the cable camera across the Dam. This was the reason I was here. The due diligence we had carried out a couple of weeks before meant that I had all the stuff to quickly rig the line. 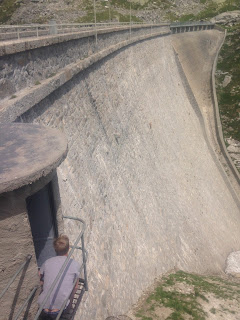 The state of the art specialist Dactylcam camera was fixed on the line and everything was working.

We retired to our accommodation provided by the ENEL Energy company which owned the dam. We were to lodge with the two D engineers Matia and Jean-Luca. They were pretty laid back characters whose main job [as far as I could ascertain] was to check for leaks in the dam which took about an hour each day, watch sky sports , and lift heavy weights. They did however offer to cook for us- outstanding pasta dishes for breakfast lunch and dinner...

We quickly got into a routine. Simon the cameraman would rise before dawn and get himself established in his Hide which was pitched next to the dam wall in such away as it looked across the Dam. 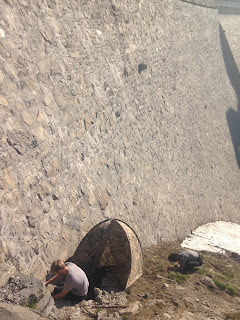 I would check the anchors on the cable way were okay and then Alex the producer would go about running the cable cam. All was fine until there was a big puff of smoke out of the back of the camera sledge trolley. The thing seemingly gained a mind of its own and zoomed back and forth across the dam on its own volition. Several trans atlantic phone calls to the Geeks that built the thing only confirmed it was dead. 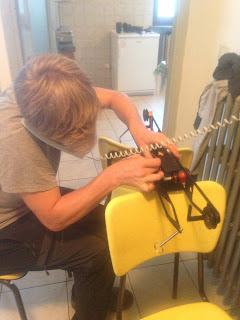 This was not good. We discussed all options and then came up with a solution. We stripped out all the batteries from the trolley,duct taped a couple of Go Pro camera's to the trolley and stuck it on the cable way and then rigged a sort of cable car mechanism where by we could winch the trolley by hand into the middle of the dam.

The shots were brilliant and the potential results breath-taking.

We returned to the foot ball field by helicopter and then five minutes later our kit was delivered back to the car in spectacular fashion. 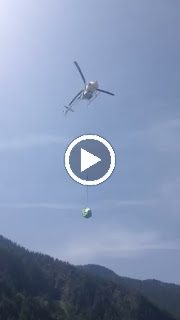 The Power of Nature will be shown on BBC TV.