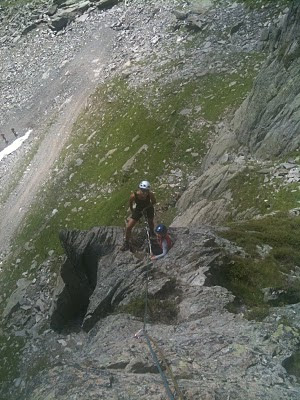 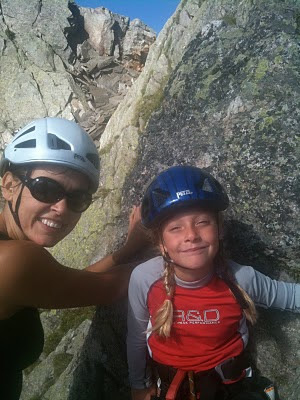 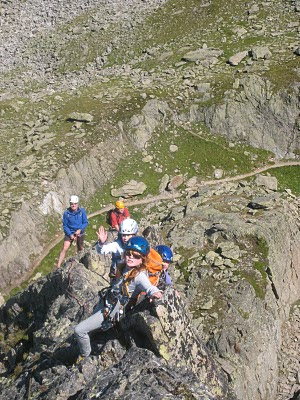 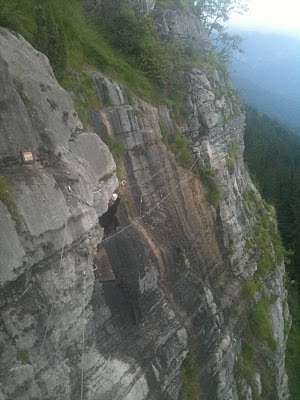 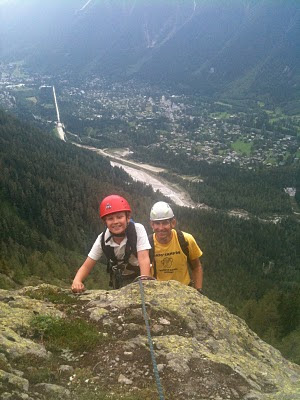 I suddenly found myself climbing with a bunch of budding climbers. On Saturday I headed up to the top of Brevent with Turi and her daughter Maria. This was Maria's first multi pitch climb.
The next day I was back up the Brevent with all the Dangerous Sisters. They are a handful so Jonathan Preston [fellow Mountain Guide and Floz's Godfather]came along to help keep them in order.
We climbed the aptly named Micky Mouse. This was Sophie's first multi pitch climb and Andrea's first lead on multi pitch climbing.
On Monday it was the turn of Chris and Arthur Boulton. We climbed the very long voie Caline.
On Tuesday we dodged the rain to complete the Via Ferratta above the Plateau d'Assey.
Posted by Mark Seaton at 9:57 am No comments:

This is what I kept saying to Michael & Kathy Howard as we stood on the Mer de Glace being lashed by freezing rain.
This was their first visit to the alps to climb. Luckly for me they just assumed the weather was always like this.
Fortunately the next day was spectacular and we headed up and climbed the aiguille du Toule a great peak for your first in the Alps
Next day we headed into the Aiguille Rouge to be confronted by more unwanted snow. In the end we used this to our advantage to learn how to climb steep snow and how to do Ice axe arrests.
On Thursday we climbed the Aiguille des Grands Montets battling through very strong winds.
Our last day we headed up the Aiguille du Midi and climbed Pt Lachanael
Posted by Mark Seaton at 6:51 pm No comments: 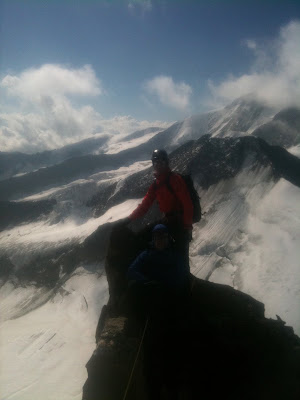 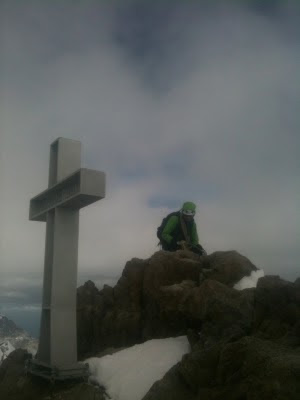 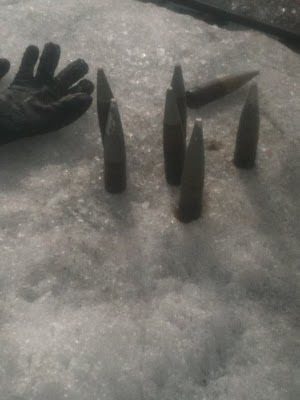 I enjoyed a very sociable week working with two of my best friends and fellow Mountain Guides Jonathan Preston and Alan Kimber. Alan is the longest serving British Mountain Guide with over 40 years experience. We were joined by James Thacker who was working along side us as an Aspirant Guide.
Our clients were all from Northen Irealand and were super keen and great company.
This is what happened.
We all met in Grindlewald and took the train up to the Jungfraujoch. We then headed down the glacier to the Konkordia Hut in the blazing sun.
It is the only Hut I have been to where there is a bar on the terrace and it was already doing a brisk trade and then we arrived and it went into over drive.
The next day we headed over the col to the Finsteraarhorn Hut and climbed a rocky ridge as by way of some training to prepare everyone for the big challange of the next day.
We arrived at the Hut which despite not having a bar on the terrace was sensational.
3.30 wake up is never easy but the prize for the day was the Finsteraarhorn- One of the finest mountains in the Alps.
We reached the top in just over 5 hours which was quite good considering the final ridge was icy and we wore crampons all the way.
That was the last day of good weather and like so often in this game we had to change our plan. Now the plan was to get out and back to the valley. The Finsteraarhorn hut is one of the remotest in Europe.
This proved to be a very big day with lots of twists and turns.
We headed out of the Hut in a brief rest bite in the storm and headed for the Oberaarjoch. It was not long before we were getting wet. We stopped at the Hut of the same name and refuelled on Rosti. We then headed down the glacier on the far side where rain became torrential and the glacier just went on and on and on.
We passed along the side of the Oberaarsee Lake finally arriving at the Cafe where we had booked a taxi back to Grindlewald.
But only if it were that simple! The road was closed because a bridge had been washed away!
The solution was to take a taxi as far as the landslide- then walk across the landslide before meeting another taxi. Again this part of the trip was not without incident as one of our group was attacked by a cow and we had visions of him being pushed into the swollen river and never being scene again.
Posted by Mark Seaton at 10:53 am 5 comments: 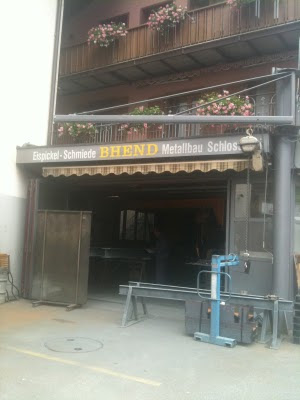 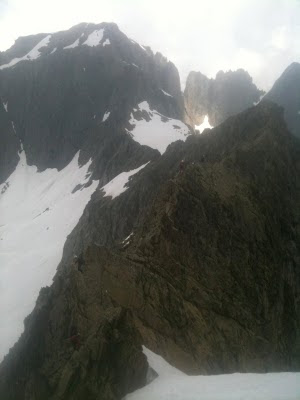 I enjoyed a fascinating week with Nick Graham who came out to Chamonix for two reasons.
The first was to learn the basics of Alpine Climbing and the second was to research the back ground to a novel he is writing.
We spent the first day on the Mer de Glace looking at Ice climbing techniques. On our second day we headed round to Switzerland and headed up to the Saliena Hut. This was important because part of the plot of the Novel was to be set in this area. The hut was fantastic with about 8 people staying the night. The Guardian cooked a wonderful meal and then we all sat around drinking some rocket fuel which the Guardian had personally brewed.
Breakfast was at 5 o'clock we were away by 6.00am. Our plan was to climb the Grand Lui.
We ascended for a couple of hours but frustratingly it started to snow and the mist came in. There was no choice but to turn around.
On our final day we went into the Aguille Rouge and traversed the Crochue. All week we talked a great deal about all aspects of mountaineering both modern and past so that the details would be exact even making sure there was a place for the world famous Bhend Ice axe from Grindlewald.
Posted by Mark Seaton at 10:27 am No comments: