October? Is it the new August?

Fabulous October weather coincided with Reuben and Antony arriving in Chamonix.  Antony reminded me he actually hadn't been rock climbing for 12 years and so we warmed up by climbing the Voie Princess above Les Bois. 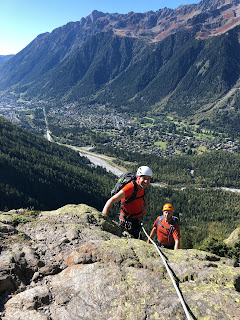 On our second day we drove through the Mt Blanc tunnel, zoomed up the always impressive Sky Way cable car, enjoyed the obligatory cappuccino and climbed the Aiguille Marbre.

On our third day we rock climbed at Les Cheserys .  Possibly the best mid altitude crag in the Chamonix Valley. Certainly it ticks all the boxes as  a wonderful destination in October. 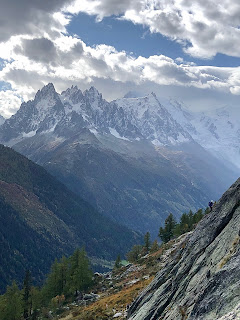 We climbed the mellow Voie Jaune.  This was all the time Antony could afford and he flew home in the evening.

On our fourth day, Reuben and I decided to return again to Les Cheserys because it had been so good, fabulous views amazing position and warm autumn sunshine which allowed us to climb the immaculate route the L'EMHM.


Back in 1983  I was one of  the first people to be employed on the  “Night-Watchman” scheme at The Scottish National  Outdoor Training Centre- Glemore Lodge.

Essentially the job was an opportunity to gain qualifications to become an outdoor instructor.  Over the last 35 years the scheme has evolved and been the launch pad for several other  British Mountain Guides.  The scheme has developed since then and it's now called the Instructor Development Scheme.

Nevertheless back then the job was quite basic. I was paid £10.00 per week, plus my board and lodging. In return for locking the Center up at night and being on call in the event of a center emergency, I could join most of the courses.  I was also expected to work two days a week with the maintenance team.  In effect I was at the bottom of the pecking order and given the worst jobs and was generally treated like Black Adder’s Baldrick.

One day in January there was to be a demonstration of how quickly dogs find people buried in avalanches. I was volunteered to be the victim. I was to be buried in the snow in a coffin like cave.  The dog would be set off and would come and find me.  [It is worth noting that still the fastest way, bar non, of being found quickly in an avalanche is with a trained dog.]

In essence it was all quite simple, apart from one major issue which was Rocky the giant Search and Rescue Alsatian.  Seemingly everyone at Glemore Lodge knew about Rocky except me.  The thing was Rocky had two jobs .  His principle job was breaking up fights in the "pint and a fight" bars of Aviemore.  In the 1980’s there were more fights than avalanches. Rocky was exceptionally good at his job. Equally scary was Rocky’s  handler Sergeant Jimmy Simpson a formidable Highland Constable.

As the day for the search demonstration approached people who already knew Rocky and Sergeant
Simpson took delight in winding me up. Yes Rocky would find you but he might equally rip you to shreds.
As far as my preparation was concerned I had borrowed a giant green industrial chemical rubber suit  to protect my self from being savaged.  I had last used it when it had been my  my job to swim around the Glenmore Lodge’s septic tank sporadically performing duck-dives in a reckless  attempt to unblock it.

The day arrived . Just before I headed out of the door, Marilyn [who worked in the kitchens] pressed a bag into my hand. “Sausages” she said with a knowing wink. It distinctly  felt like I was being led off for an imaginative North Korean Style execution.  We drove  up to the Cairngorm Ski area car park.  Not far away, Scotland's foremost expert on avalanches, Blyth Wright, had prepared a roughly 100m2 area to look like the aftermath of an avalanche.  My coffin had been dug just to  the middle of the area.

Sergeant Simpson duly turned up in his blue Ford Escort police van.  On the sides of the van were stenciled "Highland  Police Dog Unit."  The van throbbed and  rocked  as something very boisterous  bounced off the walls.  When Sergeant Simpson let Rocky out my worst fears were confirmed .  He was without doubt the most frightening thing I had ever seen.  Rocky immediately jumped up and put his paws on Sergeant  Simpson shoulders and gave him a big kiss.  They clearly loved each other.

I took the sausages and shoved them up the sleeve of my green suit. I was then led off to be buried. My cave was closed in and I was wished good luck by my sniggering “Mates.”

Silence.  I just lay there clutching  the sausages in my hand. Suddenly there was this big monster panting and spraying spittle in my face.  It did not appear to want to kiss me.  I rammed the sausages into its mouth and during the momentary distraction I made my escape.

I was quite pleased with myself. I had gotten  away without being eaten by Rocky. Sergeant Simpson on the other hand was not pleased with me, not pleased one bit.   Although wrapped up with lots of expletives the general gist of what he had to say  was that if I ever fed his dog sausages again , he would turn me into dog food.  [Reasonably the dog should not expect to receive rewards like that when he rescued real victims.]

It was several weeks later that I learnt that there was to be another dog avalanche search demonstration for a bunch of dignitaries.  Rocky was again to be the star and he was to try and find the same victim.  My argument was that it was not realistic for the dog to find the same victim [because the chances of the same dog finding  the same avalanche victim in a completely different avalanche  were remote] fell on deaf ears.

This time sergeant Simpson got out of his police van, took one look at me and said “ Just remember wee laddie…You will be “Pedigree Chum” if you play the same trick again.”

Having suspected as much, not only did I have my big green  chemical suit but I was also wearing 1980”s  Koflach indestructible plastic climbing boots with Berghaus red and blue Yeti Gaiters.  To top the outfit off I wore a full face motor bike helmet  complete with visor.

Everything pretty much went as before , until the point that Rocky found me .  This time he uncovered my boot first .  Maybe he was disappointed to not find sausages but he sank his teeth into my foot and then proceeded to pull me out of my cave and dragged me down the hill side like a rag doll.  To my mind it took rather longer than necessary for the command  “Leave” and for Rocky to return to his Handler.

Rocky and "Jimmy the dog Simpson" were famous throughout the Highlands . Not long after my dealings with Rocky there was the incredible story of Jimmy and Rocky out on a rescue when Rocky was blown over the Cornice on Corrie An’t Sneachda in the Cairngorms. He was blown off the plateau on the search for  two missing climbers. Rocky was located next day by Jimmy after a terrible night on the hill, outwardly unharmed but covered in ice. However Rocky had been traumatized and he never worked as an attack dog again and by all accounts became quite docile and never again ate anyone he saved. 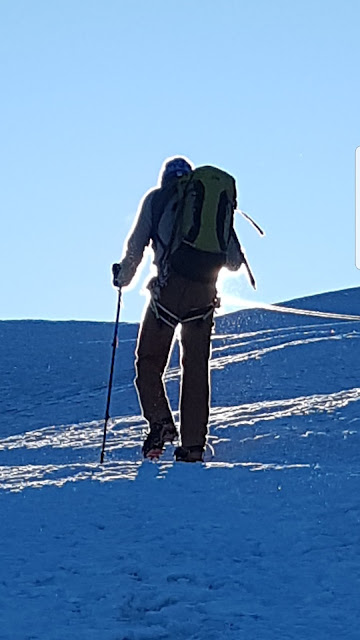 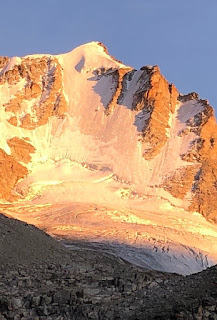 Posted by Mark Seaton at 3:00 pm No comments: