The plan was perfect. We were going to re do the Haute Route exactly 20 years to the day since the first time Chris Boulton and I had completed it together. We were joined by Mark Gilbey, James Mitchel and Adam Syme. As the saying goes the plan is often the first casualty of war.
To start with the weather forecast was utter crap.Nevertheless we had our warm up day on Grands Montets where we found out that we had certain binding issues. Still its better to get this sorted before everyone is committed. We skied around in misty snowy conditions and with all our checks done we were ready to start the next day.
Contrary to the weather forecast , the weather was beautiful and the initial descent of the glacier des Rognons was a powder skiers dream. But 10 minutes into our trip the dream turned into Adam's nightmare, he fell awkwardly and broke his ankle. 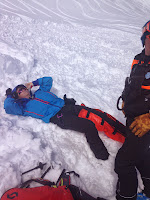 I immediately pulled out my radio and called the rescue in 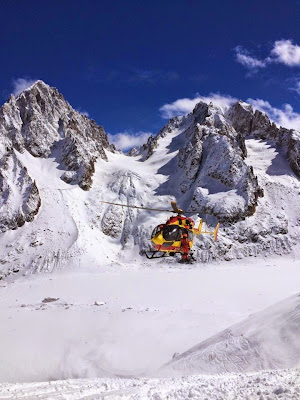 We had no choice to retreat and we retired to the bar for a beer or eleventeen. Sadly Chris decided that he did not want to risk the same fate as Adam and abandoned. This left James and Mark. They were keen to try and continue, yet the weather forecast was all over the place. So on our third day we drove round to Verbier and made our way up to the Mt Fort Hut where as always we were treated to a warm welcome. The thing in our favour was that concurrently the Patrouille des glacier race was scheduled and the Swiss army had avalnche bombed the route as well as sticking flags along the way. I felt that no matter what the weather was like , if they were going to run the race then we would be safe. As it turned out while it was raining and miserable in the Valley high up it was a perfect day. 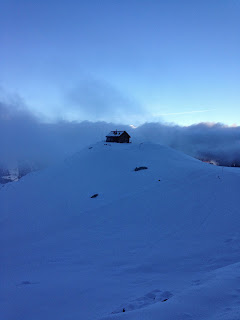 The traverse to the Prafleuri Hut was perfect and made even more interesting being able to watch the racers coming the other way. However the weather the next day was testing: Heavy snow and zero visibility. Nevertheless we pressed on with the aid of the map & compass. We arrived at the Dix Hut having seen very little all day. At the hut the Swiss army [who are responsible for the organization of Patrouille de Glacier race] decided to have an impromptu party which the Hut Staff got dragged into. This was all fine but they got so slaughtered that they failed to get up to make us breakfast the next day. The weather waa still poor and so we could not traverse the Pigne d'Arolla but instead had to climb the Pas de Chevre ladders and head up to the Vignette by going around the mountain. 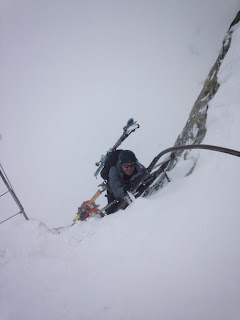 So we had now endured two days of pretty shit weather. For the final day - the push to Zermatt it is essential for very good weather, especially for the final ski down into Zermatt because there are crevasses which would swallow whole Double Decker buses. We awoke at 5.00am to absolutely clear perfect weather which was nothing short of magical. Made even more special because we had really had to work hard to get into the position where we could take full advantage of it.

We were away first from the hut and headed up to the Col L'Evéque. Fifteen minutes skiing and we were next heading for the penultimate col -Col du Mt Brulé 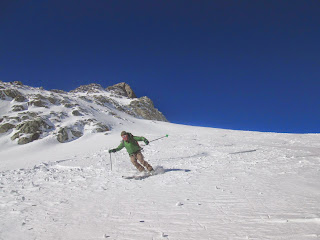 This did not prove to be easy. Normally you put your skis on your rucksack stick crampons on and post- hole up to the ridge. Yet there was far too much snow to do that and so we had to skin up which created a few "moments" [In over 50 ascents of this col it is only the 2nd time I have ever had to skin the route.]
After this it was heads down for the final long ascent to the Col de Valpelline and the first view of Zermatt and of course the Matterhorn.

It was then it got really good , exceptionally good, the snow we found on the descent of the Matten glacier was one of the best descents of the season and for me that involved over a hundred days on skis.It was a very fitting end to the ski season 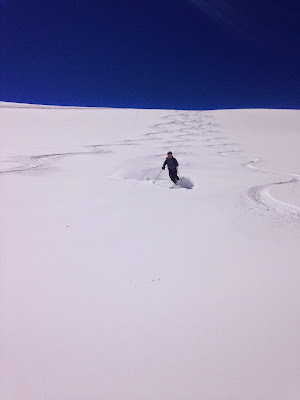