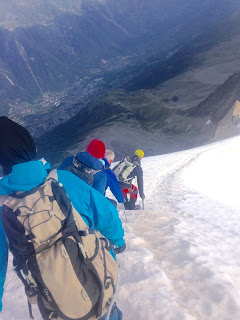 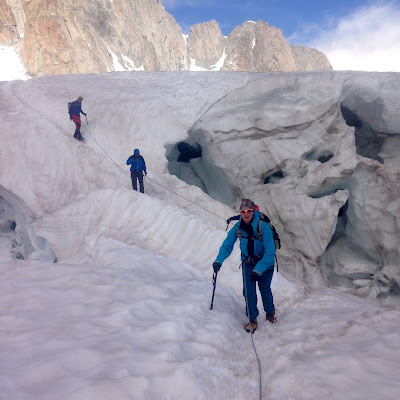 Posted by Mark Seaton at 5:27 pm No comments:

And Finally The Matterhorn 4478m 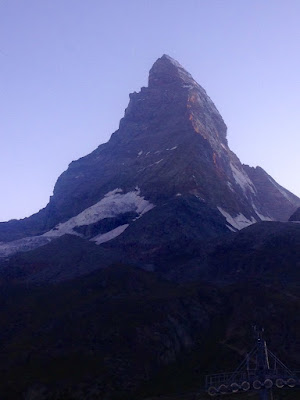 John Young joined me for ten days climbing. We had agreed that we would do whatever the conditions allowed, with no fixed goal. Always the best way to approach a climbing trip.

Our first five days climbing together were outstanding, despite not having a totally settled forecast. We did a lot of alpine rock climbs going up from the valley via cable car each day.

Monday 15th August we climbed the Eperon Sublime above La Flegere as our warm up climb. 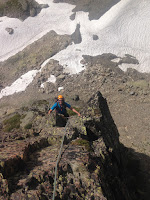 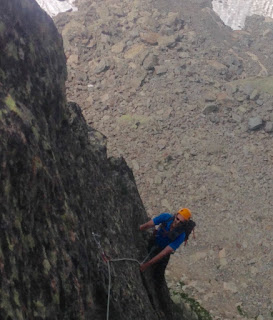 On the Tuesday we choose to climb the classic Chapelle des Glieres , one of the best middle grade alpine rock climbs in the Chamonix valley if not the Alps. Certainly the Rasor pitch has iconic status: 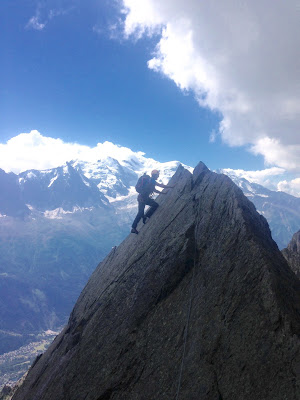 Wednesday. We took a 7.30 am cable car to the top of les Grands Montets, then headed down the Pas de Chevere 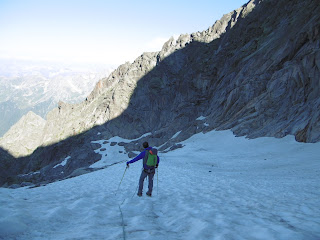 and arrived at the foot of the Eperon Bayer. 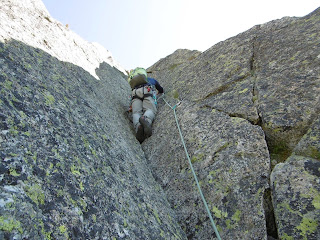 The final few pitches are in a very unique position high above what was once the Mer de Glace. 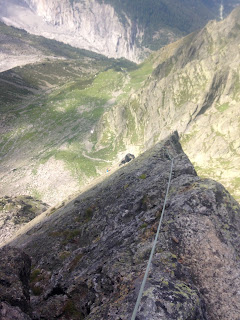 Another world class alpine climb which pops out at the top of the Bochard ski lift. The only down side is a walk down the piste, which ever way you try to dress it up is unpleasant.

Thursday was a wash out . We managed to get one pitch climbed at Les Chesery before the rain came down. 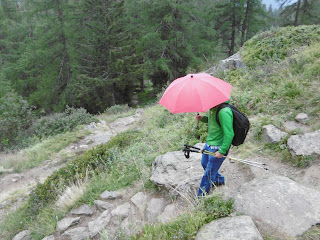 Friday the good weather returned and we headed through the Mt Blanc tunnel and up into the Vallee Blanche to do the traverse of the Entreves another very photogenic climb in an outstanding setting. 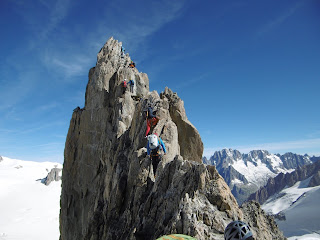 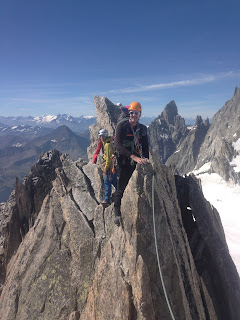 The Saturday and the Sunday the weather was poor and so we decided to take a couple of days off. The forecast for the next week was as good as it gets!

This set up a interesting scenario. Whilst John has a very impressive Alpine Mountaineering portfolio there was one gaping hole in it. The Matterhorn. There was never going to be a better chance to fill this gap, because our previous week and been perfect preparation , we were strong , acclimatized and well rested. In addition the conditions on the Matterhorn were perfect.

So on Monday 22nd August we drove round to Tasch dumped the car and headed up to Schwarzsee for a spot of light lunch[well I did , John tucked into a dustbin lid sized Rosti and could hardly move afterwards] out side the restaurant we bumped into a friend and fellow Guide who was on his way down from failing to summit. He was not keen to talk because he was protecting his client from the obvious disappointment and was making excuses about it being too windy.This sort of news is never what you want when your going up for a big climb. Rather you want to hear stories of success, its always better for the moral.

Anyway despite the Rosti, we zoomed up to the Hornli Hut and settled in.

Tuesday morning 4.15am. We awoke had breakfast and then found our selves locked in the hut behind a huge queue of people . At 5.10 am the doors were opened and everyone spewed out in to what is the "Matterhorn circus." 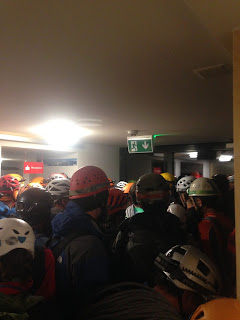 Five minutes later we were at the foot of the first wall where we stood for another 20 minutes while people took it in turns to deal with the first fixed rope. Bizarrely this first fixed rope proved too much for some idiot , who I heard complaining to his Guide that he didn't think it was going to be like this! They gave up after 10 minutes.

Once John and I finally got going everyone had spread out and we were left in our own small head torch like world. I made a couple of minor route finding mistakes , but still we arrived at the Solway Hut [4000meters] in around two half hours, which considering the fucking about at the bottom I was very happy with and we were well on target. 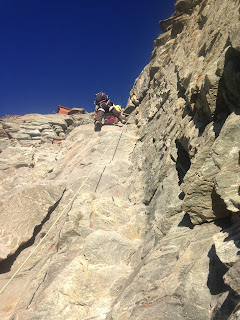 Five ours from when we started we were on the summit. 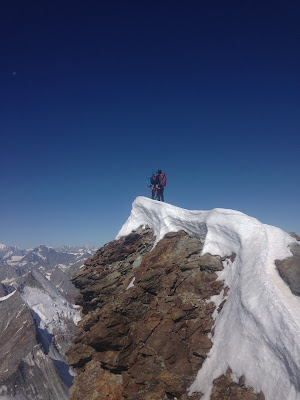 Twenty years since John's previous attempt which was thwarted at the Solway Hut due to too much snow. 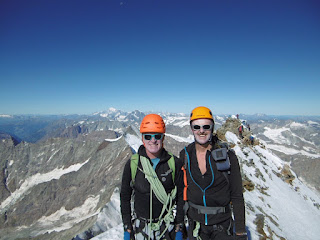 As the saying goes : "Going up is optional getting down is mandatory." And so the descent started . First the snow field , then the fixed ropes, then off with the crampons , then the steep climbing above the Solway hut 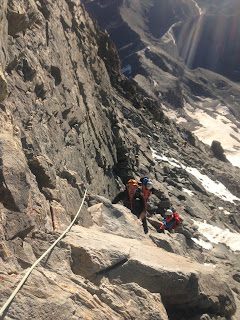 The minimun of rappells because they eat in to the time it takes to get down. Finally after 5 hours of descent we were back on flat ground. A quick drink at the Hornli Hut and then down for a big meal , excellent wine at the Schwarzsee Hotel.

Wednesday. After a leisurely breakfast we caught the lift back to Zermatt for another leisurely breakfast. John had always promised himself a painting of the Matterhorn if and when he climbed it. Happily the purchase could be made.
We then drove to Kandersteg where we checked into a very good hotel and eat very well.

Thursday we climbed the south face of the Gallihorn. This should have been a mellow day , but it wasn't. It was rather too hot and we were still recovering from the Matterhorn. 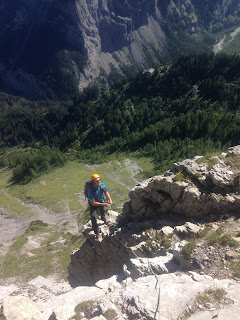 Still it was a brilliant climb. 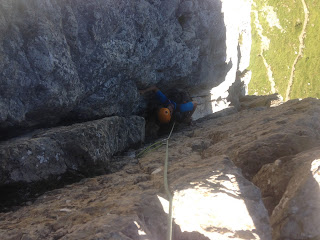 After the climb we drove around to Rougement. This is a satellite of Gstaad where everyone seems to drive around in either an open top Rolls Royce showing off their Bottox injections, or the ostentatious equivalent. Any way we were there for the rock climbing.

Friday , we left our delightful hotel Les Communes and took the cable car out of the village. We climbed the quite superb Arete Pointu to cap an outstanding 10 days of unique and varied climbing. 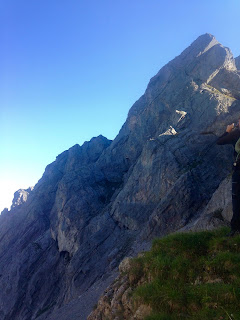 Posted by Mark Seaton at 3:38 pm No comments: 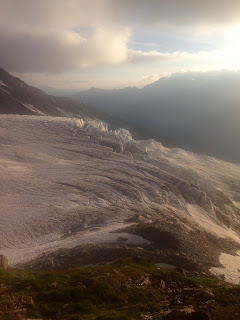 Millie and Honour are just at the right age to start alpine climbing with a night in a Mountain Refuge.

If you are lucky enough, a good age to start Alpine climbing is around 13 or 14 years old. Any earlier the lungs are not developed enough and there is a real risk of severe altitude sickness. There have been a lot of stories of kids climbing high mountains at young ages of which some make it. Its mostly got to do with their parents egos. Whats more there is no evidence that climbing big peaks as a small kid produces anything other than a disdain within them for future mountaineering.

Honour and Millie are best friends who were given the opportunity to have a go at Alpine climbing by Honour's Dad , Bill who tagged along.

It was my task to come up with a varied plan which would keep them entertained. I decided that we should start by walking up to a Mountain Refuge and doing some preliminary ice axe and crampon work on the way. I choose for us to go the the Albert 1er Refuge at the side of what was formerly [before global warming] the Le Tour Glacier.

The refuge was full , but unusually for a French Refuge, it was well organised, the welcome pleasant and the dinner was excellent.
Breakfast was at 4.30 and we were away for our climb at 5.30am. Our objective was the Tete Blanche. The conditions were perfect . There was a good freeze overnight , the snow was solid and the glacier was in very good condition. 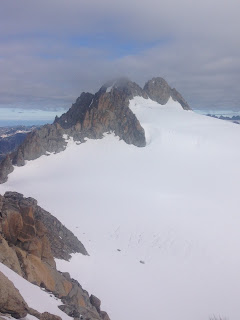 For a first trip into the alpine mountains and to walk on the glacier it was hard to better, especially with the iconic Forbes arete on the Chardonnet as a back drop. 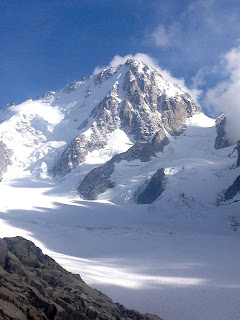 Next day we decided that the girls should get to grips with some classic Chamonix multi pitch rock climbs, so we headed up to Les Chesery high above Argentiere. We climbed three pitches of Voie Bleu before the girls decided they were tired from the previous 2 day efforts and they demanded ice cream.

On our 4th day we choose to do something easier and head to Les Bois to climb the beautiful Voie Caline where we finished by having a very good late lunch at the wonderful Mottets buvet . 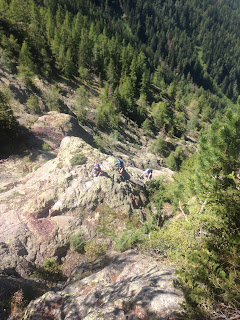 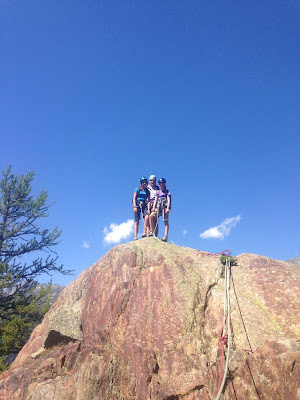 Posted by Mark Seaton at 7:09 pm No comments: