Car Crash of a weather forecast

The first casualty of the war is the plan. The plan being to climb Mont Blanc. Masses of snow , high avalanche risk and as crap a weather forecast that is possible to imagine. I met David Ford with considerable trepidation yet over a beer I broke the news to him that we needed a plan B. David was pretty sanguine [which a key component of being an Alpinist.]
Together we carved out a plan . The first thing was to escape the bad weather.
On The Monday we drove to Grenoble and David embarked on his first multi pitch rock climb the fantastic Eperon des Gosses Mythiques AD+ 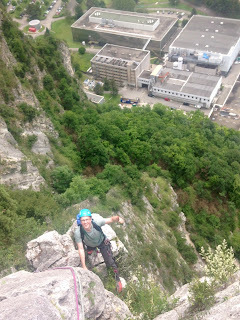 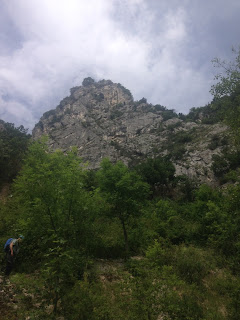 After this we headed further south with the intention of climbing the uber classic Mont Aiguille.

On the Tuesday we set off in the drizzle . Unsurprisingly despite being on one of the most sought after ascents in France we passed no one all day although we did see someone extracting them selves from a previous days epic- if you look carefully you will see someone strung out on a rappel rope at 7.30am 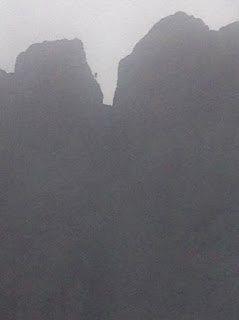 We made the summit after negotiating some tricky climbing 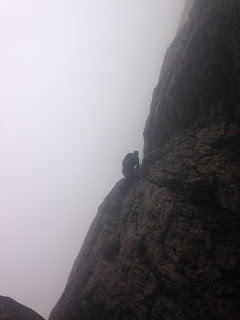 which was more akin to the North face of the Eiger than the Vercors. The descent did provide us with some atmospheric moments as we descended into the final spectacular chasm: 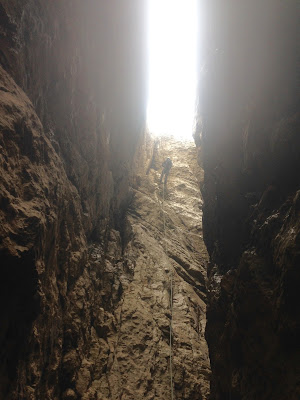 So thus far David had had an unusual but solid introduction to mountaineering , but reasonably he was still keen to strap on a pair of crampons so we headed back to Chamonix for a day on the Mer de Glace. 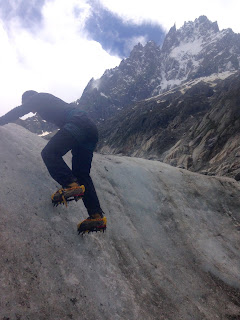 Learning how to be safe on a pair of crampons- a skill which an an alarming amount of people overlook.

On the Thursday it chucked it down. We covered some basic rope work and crevasse rescue scenarios and then we gave up for the day.

The Friday was frustrating - we headed up La Flegere and we were confronted with an a ludicrous amount of snow which made getting around virtually impossible. We used the day well constructing snow belays. An essential skill which is often put off because it can always be covered when the weather is bad.. So it was perfect. 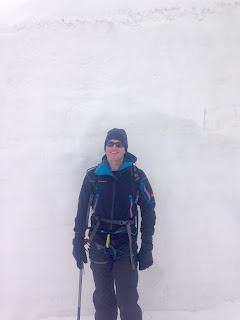 Saturday was stellar. We drove through the Mt Blanc Tunnel rode the weirdly named Sky Way Cable car and then made a traverse of the Aiguille Marbree. A mountain that benefits from having loads of snow on it because all the loose rocks are well glued together by the snow. 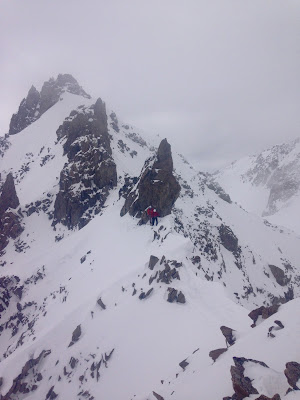 Considering the forecast at the beginning of the week I think we did rather well. As always it helps to have a big picture mentality if you want to make the most of your time in the alps.