Arete de Marseille. The classic of the classics. 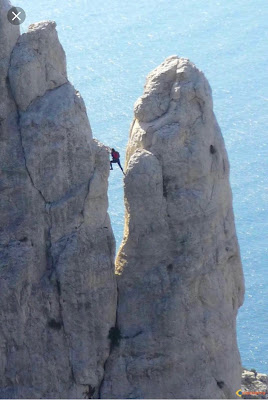 Making the most of November ,  a "nothing month" between the end of the summer and the start of the winter can be a challenge, yet what we did might prove to be a very good template for future years.

A call from my friend and fellow Guide [retired] Bob Barton suggested that we should go climbing in the south of France seemed like a very good idea.

Bob flew from his home in Scotland and stayed the night with us in Chamonix. The next day we set off for the south of France.   I was particularly keen to try and climb in Les Calanques.  Bob was just keen to climb on  dry rock.  This world famous climbing region was an area which was missing from my climbing CV.  Like a lot of climbers , I  heard it had  the  reputation for being the best place to get your car broken into by the Scroats that live in near by Marseille.  This had always made me luke-warm about the place. Yet  once I had sussed out a strategy to minimise the chance of a car break in , my one and only attempt to climb in the area had been thwarted because the whole of Les Calanques National park had been shut by the imminent of risk of forest fires.

Nevertheless the challenge of getting from Chamonix to Marseille and also climbing on the same day does require a bit of pre-thought.  Therefore we hit on the plan of driving to just before Sistereon where we had identified an ideal winter crag which faced south and accordingly received  the suns full rays. This was at Châteauneuf-de-Chabre above D942 along the river La Méouge.

Yet the plan did not factor in steady rain.  After four hours sitting in a car we at least needed to stretch our legs , hence we went to look at the crag.  Rather unexpectedly the rain stopped, the sun came out , the rock dried out and we climbed for about four hours  in an idyllic situation . 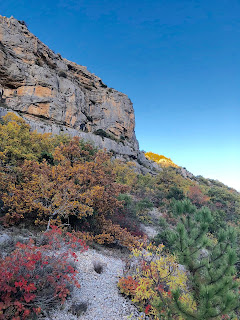 As dusk set in we headed for the Mediterranean passing through Aix-en- Provence and eventually arriving in the sea side town of Cassis.
Despite it chucking it down with rain , Cassis was busy and finding anywhere to park the car  in the small port was a challenge .  We fortuitously stopped in a parking bay for a Hotel.  It seemed like a reasonable place so we went in and found our selves a room.  We ended up staying there 4 nights and using it as our base to climb in the area.

On our first day in the region we decided to climb in the La Ciotat area.  The town was originally famous  because it was the setting of one of the first projected motion pictures, L'Arrivée d'un train en gare de La Ciotat filmed in 1895.  It was also where Petanque  was invented.  Its a bit like bowls , but played with a giant  metal ball-bearing and a bottle of Pastis.  Petanque is almost a French national sport.

Plus La Ciotat  has some of the weirdest rock I have ever seen or climbed on. Yet the first challenge was to actually find the crag because it was located behind some very expensive real estate. The owners had decided to reroute the path to the crag and the guide book editor had failed to pass on this information.  Mind you we didn't help ourselves by asking directions from what we thought were fellow climbers , but we failed to spot the flippers and lead weight belts in the back of their car.  They gave us a set of useless directions and we ended up walking into a botanical garden and concluded we were in the wrong place when we were confronted with a big "Escalade Interdit" sign.
About an hour later we arrived back where we started , found the path and the crag. [Hind sight and all that.]
We climbed on the weird rock , which is a type of conglomerate and finished the day with a mountaineering excursion to climb to the summit of Le Capucin. 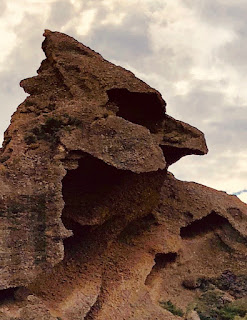 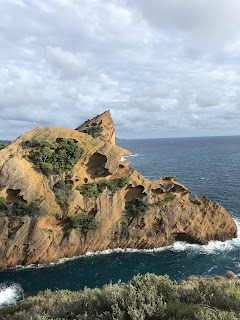 Between Cassis and La Coitat there is a spectacular " alpine road" called the Route des Cretes D141.  This was to be the departure point for our attempt to climb on the crags called falaises de Mallombre near the  Semaphore which is a modern light house and naval communication center.

Once again the crag took some finding in part because  our route to the crag was over complicated by a helpful local mushroom-picker giving less than accurate directions , despite his help eventually we did locate the crags. However we were not impressed as all the routes resembled mirrors where you could see the reflection of everyone who had ever attempted the climbs and therefore made them impossibly difficult for their grade.  In the afternoon we decided to explore some more of the area and bumped into two local women , who new exactly where to climb.  They proved to be a wealth of information on the local climbing area as well as their view on potential car crime.  They advised us to completely clear out the car if we planned to climb in Les Calanques close to Marseille.  I asked them what they thought was the route we should try and climb.  They suggested the Arete de Marseille on La Grande Candelle.

Despite an initial poor weather forecast , we decided that this route would be a fine objective. The path to the climb starts at the University car park.  It was about an hour and half's walk to the foot of the route.  Once again I made the mistake of stopping two students who were out for a walk and asking them to confirm we were on the right path for La Grande Candelle. Uncannily  like the previous days , these girls were only too happy to offer us spurious directions and even tell us we were in the wrong place and should turn around.  We thanked them and this time ignored their advice.

The weather was decidedly  windy and there were some significant spots of rain, but the weather forecast was for the weather   to improve and we pressed on.  This  meant we had the route to ourselves and therefore made it an even more exceptional climb in a unique situation.

The first pitch is  the hardest. yet after the experince of the previous days climbing it was  straight forward and solid positive climbing.  The pitch which makes the route famous , is the start of the second pitch. It requires you to step/fall/jump from the pillar to the main arete. It is spectacular , but it is surprisingly simple.  A further five or so pitches of immaculate climbing leads to the top and a 30 meter rappel dumps you back on the return path.

So I had finally climbed a route in Les Calanques.  It was worth waiting for.  Yet it seemed that we should ride on our success and return to what is arguably the most popular area.  En Vau.


This is a place steeped in French climbing history and where among others Gaston Rebuffat cut his teeth to become one of Frances most distinguished  climbers [and writers of mountaineering literature.] 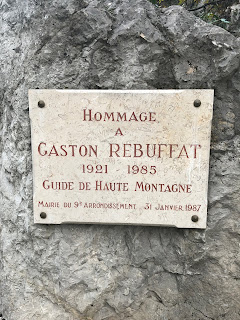 We identified the route called La Moitie-Moitie as the route to go for .  We drove up to the Col de la Gardiole and parked the car.  From there it is a question of walking down a track [partly tarmacked] virtually to the sea.  Although it is understandable that access is restricted it is also annoying to be constantly passed by military trucks and forestry vehicles who in the latter case , it seems that there only function was to drive up and down the track making sure that no one else drives up and down the track.  Whats more when I flagged down one such Forestry official to ask him if he knew where our climb was he hadn't a fucking clue.

Once located ,the climb was superb and this being mid November we saw no other climbers.  The weather was perfect.
We then walked back to the car , sorted ourselves out and drove to Sisteron with the intention of climbing on the crags opposite the Citadel the next day.  This is exactly what we did before driving back to a rather chilly Chamonix