An Update on uncertain times

If you can't be bothered to read this blog you can listen to it by clicking on this link https://audioboom.com/posts/7757271-64-5-your-christmas-update-from-the-alps

As soon as it was announced the ski stations would not open in Chamonix before the 7th January , it snowed.  Of course it did.  We had about a meter.  It was cold and fluffy.

It was THE dream start which any alpine resort would want.  Apart from the Covid wrecking ball.

Despite the lifts not opening the the cross country pistes have opened and the conditions have been very good.  This has lead to an explosion in interest in cross country skiing 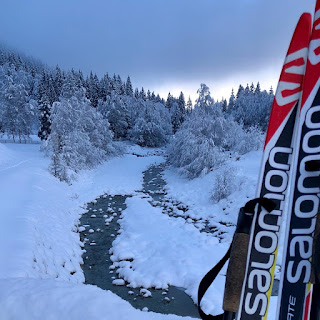 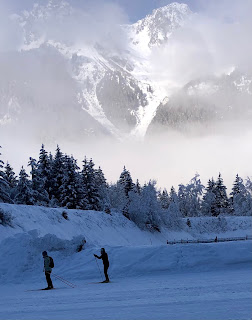 There were queues to buy tickets like I had never seen before.

In addition the shops have sold out of all their x- country ski equipment.

In the last few days the temperature has shot up and the snow has started to melt.

With the refreezing at night it has made the x-country pistes icy, especially first thing in the morning.

Skiing in icy conditions is never good , no matter what sort of skis you are on , but with no metal edges and skiing with a free heel this has lead to Charlie Chaplin esque moments which would be ideal material for You’ve been framed.

Still its good for the balance and once you get back on traditional alpine skis the whole game seems remarkably straight forward.

If you take the long view , The freeze thaw cycle has been very good for the snow pack giving a good firm base for the season.

Yet I have had an Epiphany.  I borrowed a Fat Bike.

Its like a Mountain Bike on steroids. They have big fat squishy tyres and they allow you to ride on top the snow without sinking in.   It is proving to be just the thing for Exploring the Chamonix valley.