This was a trip which had been planned for over a year; Charles Sherwood and I were naturally very excited . It started well. Even the arrival at what we had been told was a burnt out Kenyatta airport, was far better than arrivals at John Lennon airport on a good day. Then the next day I was delighted to discover that we were going to be with the same guide I had used the last time I was in Kenya 21 years ago. Edwin Mwalimu Doroniko. Eddy to his friends. 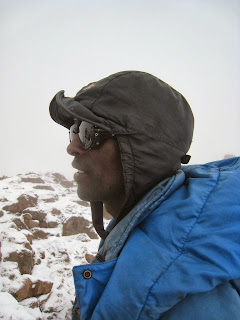 We left the absolutely fantastic Fair View Hotel and drove to the the town of Chogoria , where after lunch we picked up LLoyd our cook and changed to a couple of Land Rovers - exactly the same two of 21 years ago. After about 5 minutes it broke down. 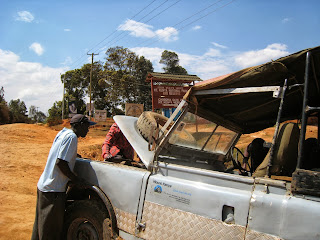 Some judicious use of a hammer it started again. we were off, until the other broke down. [raidiator this time] 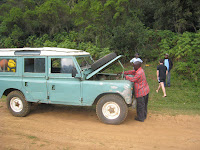 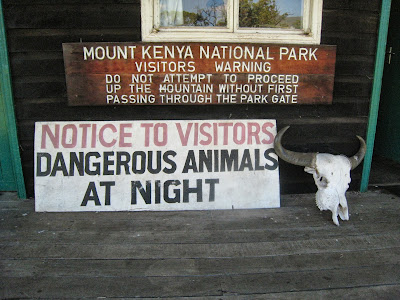 This is at about 3000m above sea level. A stunningly beautiful place where we stayed in these "chalet" huts which were very like a village cricket pavillion. 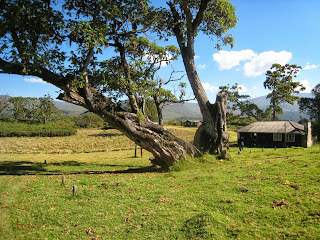 The next morning we set off for Mugi Hill 3500m [an acclimatisation peaklet] before heading down to Lake Ellis where we were due to camp. It was here we discovered that the cloth the toilet seat had been wrapped in was in fact our table cloth 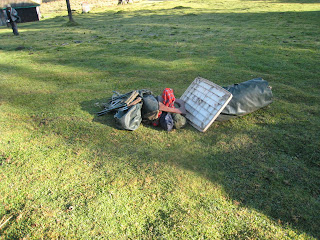 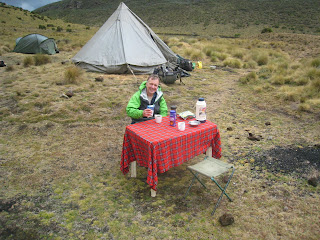 The next day we headed over to Lake Michaelson a truly exceptional place to camp. 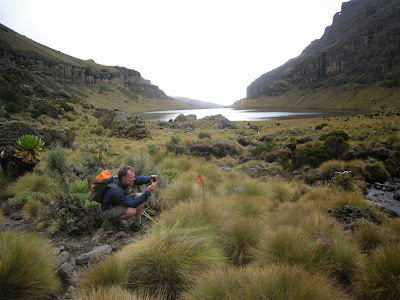 We should have made the most of it because unbeknown to us this was to be our last really good day of weather. The next day we had a very short day to Simba Tarn at 4600m. Anyone who thinks its mostly sunny in Africa should think again. 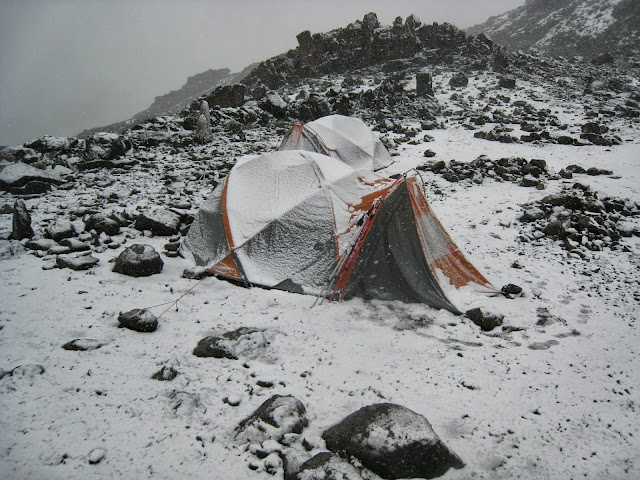 It was then onto Pt Lennana 4985m this is the peak which every Trekker to Mt Kenya would like you to believe is actually Mt Kenya. It is not. It is a walk which you could be forgiven for thinking was on the Isle of Skye [apart from the Leopard droppings.] Since we were both last here [Charles on his Honeymoon in 1984 and me not on my Honeymoon in 1992] The Kenyans have proudly built the worlds highest via Ferratta. 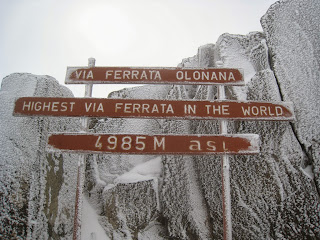 It is also possibly the shortest too. 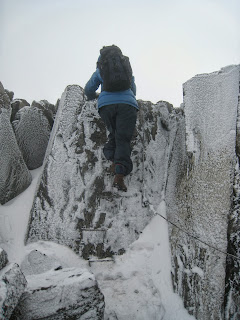 We arrived at the top to see - well nothing. Eddy then seemingly forgot that his charges were seasoned Alpinists and deemed the descent ridge was not safe for us and therefore took us on a tortuous detour through a boulder field from hell where we finally staggered out of the mist at a square tarn. Obviously the cartographer had run out of inspirational names at this stage because it was marked as Square Tarn on the Map.
It was still early so we decided to go on a circumnavigation of the whole of Mt Kenya. We walked over to the Austrian camp and then descended on the south side where we got to see what was once [before global warning] the most famous climb in Africa The Diamond Couloir. We paused to have a look. It looked like it might possibly be complete so to satisfy our curiosity we made a detour to its foot. We never got a definitive answer because the mist came in. It looked possible to climb but possibly not by us. We decided that if we had enough energy afterwards we would come back round and have "a look." [Talk about miss- placed optimism]
We continued around the mountain up to Two-Tarn and then down to another inspired name for an oblonged shaped lake: "Oblong Tarn" before tackling the tough Hausberg col which was because of its height ,rather like climbing Mt Blanc for the 2nd time in the same day. It was then a 15 minute scree run to our base camp. Home for the next 5 days Kami Camp. A beautiful location right under the North Face of Batian 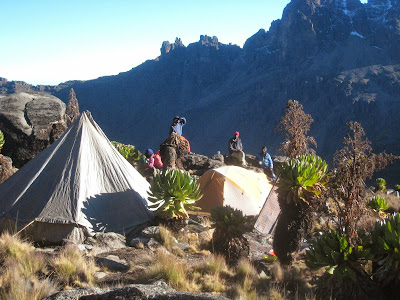 Our plan was to traverse Batian and Nelion via the west ridge. So the next day we thought it wise to go and scope the approach. This we estimated would take a couple of hours. So after 6 hours of running the gauntlet of loose rock we staggered back into camp feeling pretty shot. The problem was what had been a fairly simple approach before the glaciers melted had turned into something like walking through a block of flats while they were being demolished by the wrecking ball. 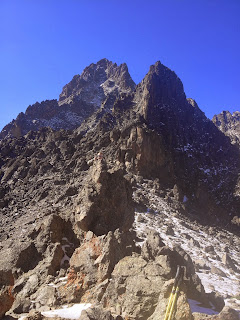 We were going to need a day to recover. During this day it snowed and then snowed stopped and then snowed some more. The upshot is that we would have to wait a day for it to clear. It didn't. The mornings were okay until about mid day, then it just snowed and hailed and rained. 18 hours a day stuck in a tent starts to pale. The only alternative was to crack open our bottle of Talisker.

We gave up on the West Ridge and decided to have a go at the voie normal on the north face of Batian. Breakfast at 4.00am - porridge followed by baked beans sausages and eggs. Eddy and the porters carried our kit to the foot of the route and we were climbing the 1st pitch by 6.00am . Our spirits were buoyed by have the company of two Swiss and their local Guide David. We made very rapid progress up the route getting up to the Amphitheatre just before 8.00am. Then above here conditions changed and we were stopped not just by loads of snow but rock hard ice covering all the holds.
In addition we could see more bad weather speeding toward us. The reluctant but obvious decision was made to get the hell out of there asap.
Back at camp and it was snowing hard - no choice but to get out and head back to Nairobi. This involved walking out via Sinimom route until you get to Old Mosses camp which is a dump. Its only redeeming feature is it sells beer 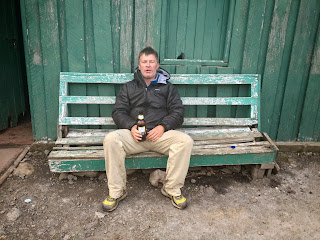 Next morning the truck came to collect us. Clearly there was disappointment at not reaching the objective, however this was put in perspective by the disgusting terrorist attack on the Westgate Shopping Mall where upwards of 70 people had been murdered. We did hear about this but we had no real idea of the enormity of the event until we got hold of UK and world press reports and learnt that the Foreign Office had "advised against all but essential travel to Kenya." We did get temporarily stuck in Nairobi because of the chaos from the fall out of the Terrorism but it could have been a lot worse. Essentially all we had to deal with was the vagaries of nature , not the action of a bunch of religious nutters.

We will be back! We have penciled in January 2015.

Posted by Mark Seaton at 4:54 pm No comments: