A resort with issues.

Then around the new millennium  someone within the Powers that Be had the bright idea that they should target a "better class of skier." But not  better skiers, just skiers with more money. It was theorised that people with more money generally only want to ski in the sunshine, so the logic was to reinvest in the lifts on the south side of the valley i.e.  Le Brevent and La Flegere. and  spruce up the center of Chamonix with some posh shops - hence the arrival of the Chanel Boutique- [which has now gone again.] So, firstly Flegere and Le Brevent were linked with a horizontal cable car thus creating a larger ski area . The Brevent /Plan Praz telecabine was rebuilt and a new Index cable car was installed. When it was pointed out that skiing on the south side meant the snow deteriorated quickly in the afternoon , the official thinking was wealthy skiers don't ski in the afternoon, they eat lunch. Yet the project was half baked because they never got the cafes and restaurants sorted out. The choice is laughable. At the top of la Flegere cable car there is a cafe called the Foehn. This is supposedly named after the Foehn wind, the same disastrous wind that frequently shuts the cable car leaving thousands of skiers trapped on the mountain very regularly. The decor inside The Foehn cafe gives a nod to the Eden Project with savanna grass like  carpet stuck on the walls and spot lights that hang down like triffids. It sells insipid coffee and car-wash sponges purporting to be  flavoured muffins at eye watering prices. In the same building down stairs there is a restaurant which provides DIY incinerators loosely based on table top barbecues.  These barbacues have a two stage job. Firstly they allow you to burn your own meat and cheese which creates a thick impenetrable stench.  The smoke then accomplishes the second job of completely blanking the jaw dropping view  through the un openable windows. Over on Le Brevent there is La Bergerie, which is okay, but only as long as you don't go  down stairs into the cafe where you will be treated as an inconvenient annoyance. The whole thing bumbled on for many years , then there were some big infrastructure warning signs that even a blind man galloping by on a horse would have seen.


Firstly there was the high-season breaking down of the Eggs which traverse the Vallee Blanche from the Aiguille du Midi to Helbronner. Last year this made international news headlines. Many people went home with some memorable  stories. For example , being plucked by helicopter in vertiginous rescue would be up there with anyone's holiday memories. Meanwhile others were "lullabied" to sleep in the Eggs. If that wasn't fun enough, on their eventual "hatching"  the next morning they were  presented with a free voucher for another  complimentary trip. Yet it was arguably last winter which marked the start of the slippery slope.  During a winter storm the cable which suspends the Eggs snapped sending the Eggs to the glacier floor.

Next there was the saga of the Aiguille du Midi damaged cable. This, don't forget is one of the biggest generators of cash in France and it is meant to be the 3rd most popular "natural" tourist attraction in the world after the Pyramids and the Niagara Falls.  Well the second stage broke down for the second time in six months. Firstly the tractor cable , which pulls the cable car up, was replaced. Soon it turned out to be rusty. Rumors flew about that this was because there had been corners cut in the sourcing of the cable. These were categorically denied. The new cable was defiantly sourced in Switzerland and this time the lorry transporting the bobbin did not get stuck under the railway bridge in Argentiere. The new cable was up and running by mid summer. It was during a routine check in mid July that a 60cm section was found to be damaged. Again rumors started flying - the most popular was that the permafrost had melted and the mountain had moved, causing the cable to be out of alignment. Whatever the real reason know one seems to know . What is agreed upon is that this won't be fixed until Christmas 2018 may be January 2019.

Moving across the valley to the other side of Chamonix to the Brevent , while the Plan Praz telecabine is the bench mark of a modern unit, the same can not be said of the Plan Praz /Brevent cable car. Presently the cable on this also being changed.  It was at the point when they had completely dismantled it that the engineers had the eurika momment to experiment with  a new tractor cable.  Perhaps in the context it isn't surprising that they are struggling to get it up and running again?

Moving along the valley we arrive at La Flegere. Regular users will be accustomed to the depressing queues which go with trying to shoe-horn skiers into a cable car that is no longer fit for purpose. As already mentioned it closes regularly due to the Foehn wind , but in addition the motor regularly burns out .

At the head of the valley in the village of Le Tour it is universally accepted that the telecabine is in dire need of a new one. It was 'old' 30 years ago. Now the pylons are unstable and again rumors suggest that even the people who work on the lifts are scared to travel in the bubbles because they are worried that they will spontaneously self detach . There was and is  a plan to rebuild the lift. It was to start from a slightly different place. A place that not everyone in the village could agree upon. There was a petition signed arguing that the new lifts departure point would disadvantage certain businesses.  The whole project stalled and consequently there has been little economic alternative other than to put a "sticking-plaster" on the current lift and hope it gets through the next winter season.

Moving back down the valley on the north side there is Les Grands Montets. This is considered by many to be " the jewel in the crown" of skiing in Chamonix. It has some of the best and steepest skiing terrain in the world. It is mythical. It was also the first resort in the valley to have "Ambassadors."

These brave people  are there to break the news to you that the whole Grands Montets experience is not going to be quite as good as you thought it was going to be. This is often because the queue is too long , or the lifts have broken down , or because the chief Pisteur detonated a preventive avalanche that  ploughed through the middle of the Plan Joran Restaurant.

This next season the Ambassadors are going to have even more to explain. The challenge will be to explain how the roof caught fire and destroyed the Lognan lift station, bringing down the cable and causing upwards of 40 million euros of rebuild.
How the roof did catch fire is a matter of conjecture . But it all seemingly stems from cost cutting: The building needed a new roof but it was judged that patching it up would be fine. So a local contractor was employed to use a flame thrower to melt and spread hot tar over the biggest holes. Only it went wrong. 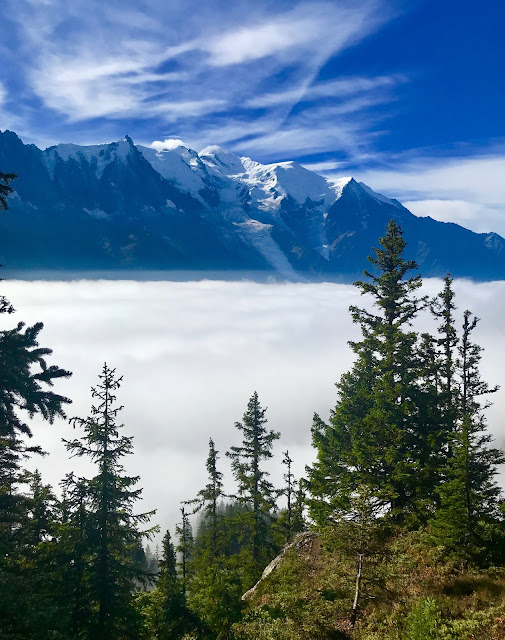 My favourite time to be climbing in the Alps is late Septemeber early October. Everyone has cleared off, it is cooler therefore less knackering , it is safer because the rocks are glued in place and the weather can be so clear and the views show off the autumn tinges at their very best. Fortunately for me, Reuben agreed with me about the benefits of Autumn climbing. We had a long standing arrangement to climb together at the end of September. We had no fixed agenda other than to do some interesting climbs and experience some real solitude. We started with the La via ferrata des Evettes high above La Flegere. It is an ideal "shake down" day and is good place to bank some early acclimatisation. 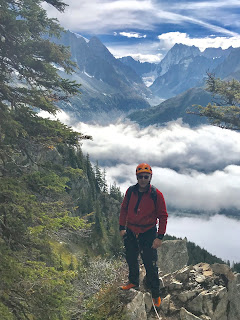 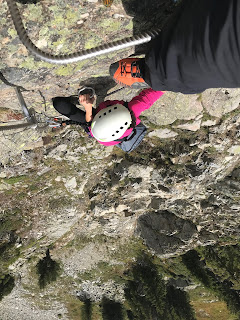 It was also a chance for Reuben to spend sometime with his grown-up daughter who he doesn't get to see that often. Emma was able to join us for our first two days together. On our second day we rode the Montenvers Railway up to what was was "formerly" the Mer de Glace and climbed on the impressive slabs 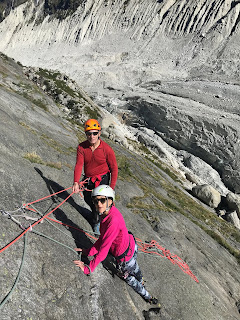 On our third day together we drove through the Mt Blanc tunnel , rode the Skyway lift to Pointe Helbronner which over looks the Vallee Blanche and climbed the Aiguille du Marbree. 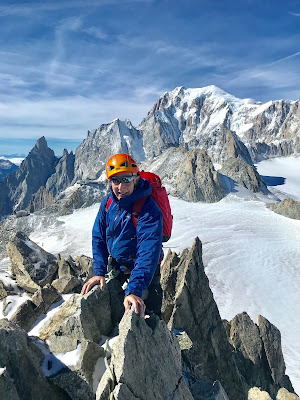 It was cold clear and it all felt wonderfully remote. On our fourth day we climbed above Argentiere on Les Chésérys cliffs. We climbed the immaculate, route the L'EMHM [The ecole militaire du Haute Montagne] no guesses for who originally put the route up. The penultimate pitch is very very good. 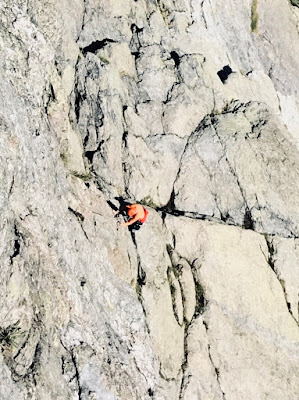 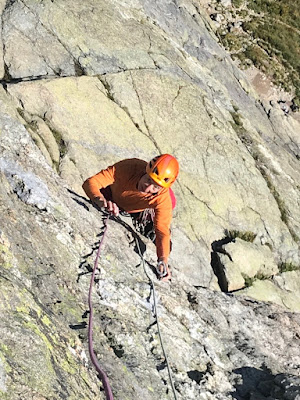 Our fifth day was probably the standout day. We left the Chamonix valley and drove around to the Col des Aravis. On a beautiful morning we headed up the tough steep unrelenting comb which leads to the start of the Arete Marion. This is a ridge which is in a wonderful position with views back to Mt Blanc and the surrounding area . We were watched from a far by two massive Eagles. They came so near that I was suspicious that they weren't actually real , but instead giant remote control toys. 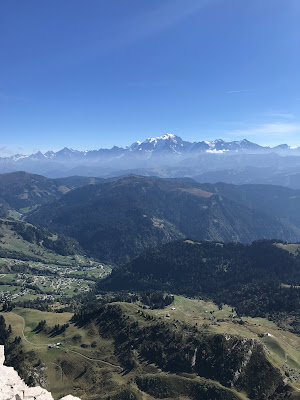 The penultimate pitch is the one for the memory banks: 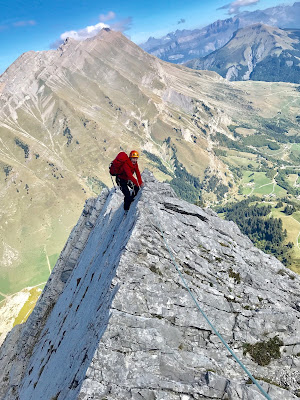 As we were climbing up we saw, below us, another team of two climbers. We joked that this was not what was meant to happen this week , the whole idea was to climb in complete solitude and we had failed . After the climb, as we walked down from the summit of the climb we could still see the climbers making what appeared to be unusually very slow progress they appeared to be just standing there. Yet the next thing I heard this almighty whooosh and two figures came flying down the comb , before deploying their parachutes. "Squirrel Suiters." 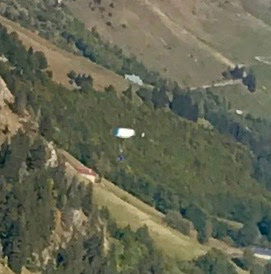 They made it down quicker than we did. On our final day we headed over to Switzerland. We drove up and through Verbier and then on and up the Savoleyres pistes system [ Land Rover Defender useful] and parked at the top. We then walked over to the Pierre Avoi, the giant pillar that can be seen from Martigny . We climbed the L'Arete. A route which is all about being in amazing situations . The only complaint was that it was too hot! 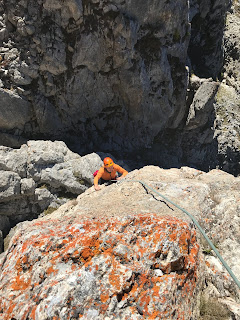 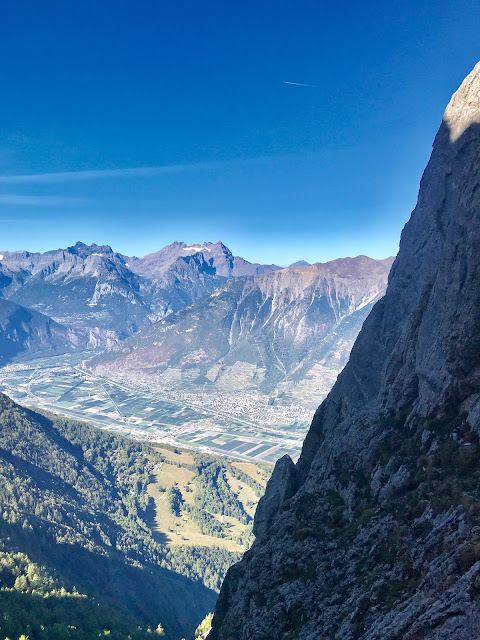 Posted by Mark Seaton at 2:11 pm No comments: