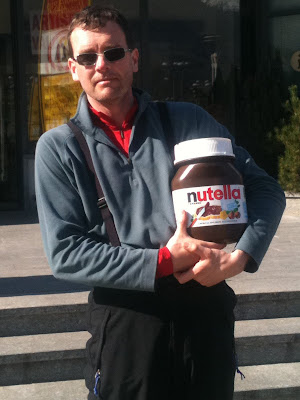 Bill Mills and Greg Knott joined me for what seems to be an annual adventure. We had no fixed plan other than to spend sometime in the high mountains. The conditions were so good in Italy that I suggested that was the place to go. Fine until we arrived at the Mt Blanc Tunnel and hit an unholy que.
Plan B was quickly hatched and we headed to Flegere where we moved over to Le Brevent and climbed up to the Col Cornu. From there we headed over to the Aiguille de Gliere before skiing back down to Flegere on good spring snow.
The next day we managed to get through the tunnel and headed for Champoluc. we dumped the Land Rover and headed through the lift system over to Gressoney. The weather wasn't great with snow flurries and our attempts to ski off piste were thwarted so we just cruised over to Alagna.
The next day was very good. We climbed Vincent Pyramid 4200meters. It was cold , it was clear we saw no one and it was fantastic.
We spent another night in the wonderful Rifugio Vigevano and were looked after by the equally magnificent Juiliana.
The next morning we left the Rifugio - skied down to the Orestes Hutte [where we stopped for a cappuccino] before skinning up to the Colle della Salza. From here we had a very long and spectacular ski down to Staffal.
We the rode the lifts so we could ski down to Champoluc - but not before we stopped at Auberge Frantze www.frantze.it for some fresh pasta with porcini mushrooms.
Then we stopped on the way home to pick up 5 kilos of Nutella.
Posted by Mark Seaton at 8:31 pm No comments: 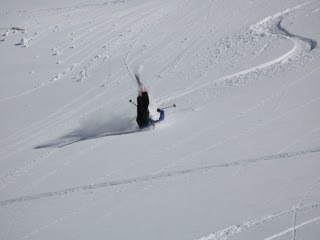 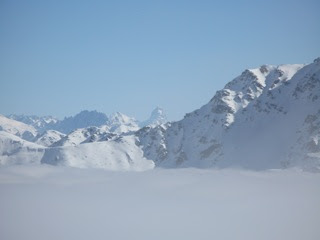 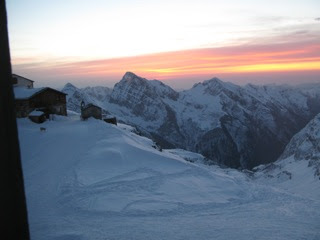 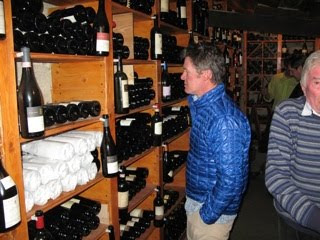 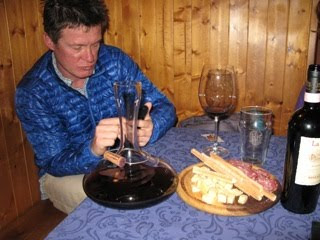 This was a great week with some excellent skiing and some truly memorable huts and equally stunning red wine. Peter Whelan and his good friend Nigel Costain joined me for 5 days.
We started with a good warm up tour by going over the Col Cornu from Brevent and linking up by skiing down the Comb des Glireres in very good snow.
The next day we headed for La Thuile where the snow was exceptionally good as was the lunch at La maison de la Niege.
On Wednesday our trip really got going when we drove to Champalouc and headed through the vast lift system taking some off piste routes and finally arriving at the rifugio Gigliminia where we had our 1st super Tuscan followed by a tour of Alberto's wine cellar.
On Thursday we climbed on skins to the Mantova Hut before skiing down the very long run down the Eagle gulley to Gressony where we had a cappuccino and a panni, before taking the lift back up to the rifugio for another "big red"
On our final day we skied down to Alagna where we had to stop for the inevitable cappuccino before working our way across the valleys back to Champalouc. But not before we came across ( by accident) an incredible mountain auberge.
Posted by Mark Seaton at 6:37 pm No comments:

Reuben and Fiona Berg joined me for 6 varied days of skiing. Luckly the day before we met it snowed all day. When we met the sun came out and stayed out all week.
We started at Le Brevent. On Tuesday we went to La Thuile. On Wednesday went went straight back to La Thuile again because it had been so good.
On Thursday we changed the rhythm of the week and climbed the Col des Otannes above Le Tour we had exceptional snow on the descent to Trient. On Friday we skied the Argentiere Glacier from the top of Les Grands Montets.
We finished the week at Le Tour still with good snow and plenty of sun shine.
Posted by Mark Seaton at 8:29 pm No comments: