The ski season was shaping up very nicely. A steady supply of unstable weather had provided regular top ups of snow through out February and March. This is not to say it was perfect because it was not. This was because there were  dramatic fluctuations in temperature resulting in some soakings.  There were several days when it was so wet getting on  a chair lift was exactly like being attacked by the riot-police with a water cannon.

Yet there were many days when the powder skiing was as good as it gets .

Each morning we knew if we were going to potentially get good powder skiing at around 5.30hrs when a giant Bernese Mountain Dog arrived in our bed.  Eddy had become very scarred of the avalanche control blasting and thought he would be a lot safer under our duvet.
It is always fantastic to wake up to a fresh dump of snow, sometimes it was necessary to get up an hour or so earlier in order to clear the snow  from the drive so we could get the car out. 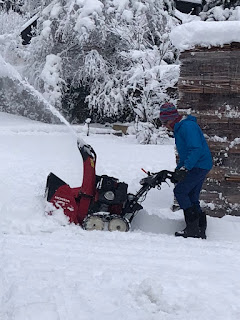 All in all there had been a tremendous amount of snow fall through out the season.  Low down this had been affected by the unhelpful swings in temperature, yet high up the snow had accumulated significantly and the ski touring season was looking good because all the glaciers were well filled in.

Then it changed in ways it had never changed before.  Frankly I did not see it coming .  There were accounts of Coronvirus out breaks in Pietmont Italy.  I had a group booked to go ski touring in Gressoney which we cancelled , not for fear of becoming ill , but incase the Mt Blanc tunnel shut and we got stuck in Italy.  Yet we still had a few day trips through to Courmayeur and everything seemed fine.
Then events started to change - Italy went into total lock down, including all mountain based activities. But  life in France kept on as normal, the snow continued to fall, the skiing was good and everything was seemingly just fine, or so I  thought ...

Then suddenly the lifts in Chamonix closed with no forewarning . Then, we Guides  were told  we would not be insured which is another way of saying you aren't allowed to work.   Then President Macron announced the total lock down.

It became  obligatory to down load and print off a

A form you had to fill in to leave the house.  To start with this meant you could still go cross-country skiing or biking or running, but no rock climbing or mountaineering. But the next day the cross-country skiing closed and then the regulations tightened and an up dated form had to be filled in , this time stating you could not venture more than a kilometer  from your house for a maximum of one hour and no cycling.  The reason being that falling off your bike could stress the hospitals unnecessarily.

So there you have it.  Never in the history of skiing or mountaineering  has the season stopped so abruptly and so that seems to be the situation today in the Chamonix Valley.  Mind you events are moving so quickly anything could happen. 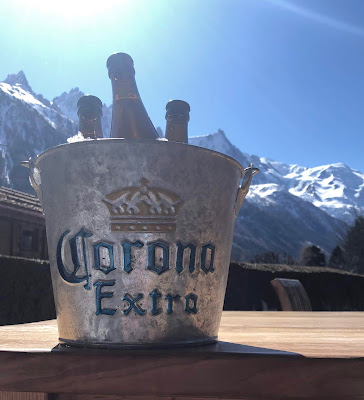 Posted by Mark Seaton at 1:26 pm No comments: