I had four very interesting days climbing  with Reuben Berg.  Three of them in Italy and our first day in Chamonix.

On our first day we took the cable car from La Flegere and walked over to climb a route called Athena.  Despite it being a Sunday and not a cloud in the sky, we were the only people on the crag. Why ? It was impossible to say, but we weren't complaining. The only thing we did complain about was the heat.  The alps is experiencing another unwelcome "canicule."

On the Monday we headed off on our mini Italian trip, driving through Switzerland and over col de Gd St Bernard and climbing on a crag called the "Petit Cervin" [Little Matterhorn]. We climbed the route" La Charlie". The first ascent was made by the brilliant Chamonix climber Terry Renault and Raymond Gay - a monk at the Monastery.  It is a wonderful 8 pitch climb in an equally wonderful setting.  The only downside was the noise from the wankers who ride their obnoxiously noisy motor bikes up and down the road.

After climbing stayed in the Hotel Albergo Italia which is situated at the Col du Gd St Bernard just over the border.  It is an incredible hotel.  It also has the advantage of being at 2470 meters which makes it a good place to acclimatise.

After an excellent breakfast

We had a leisurely drive down in the direction of  Aosta  before turning off the road and heading up Vallpelline valley towards the village of Dzovennoz. From here the plan was to head up to the Refugio  Crete Seche.

We were given dispensation to drive up the track which cut a good hour and half off the walk which was a relief in the oppresive heat.

The Refugio Crete Seche is wonderfully positioned, with a delightfully welcoming guardian.  We were the only guests.

Breakfast was at 5.00hrs and we were away at 6.00hrs. There was no need for head torches because we were setting out on mid summers day.  Our goal was the traverse of the Crete Seche ridge which runs directly along the Swiss /Italian border.

We walked up the long wild valley until we arrived at the col de Crete Seche.  This took an hour and a half.  We stopped to eat and put the rope on before setting off up the ridge.  There were a few spots of rain and some ominous black clouds, but we judged we would be okay.  We arrived on the summit of the Dent d'Oyace an hour and a half later, still dry.

A further picnic stop and a drink  it was then  back down to the Refugio, a quick Cappuccino,  down to the car and a return to Chamonix via the Mt Blanc tunnel. 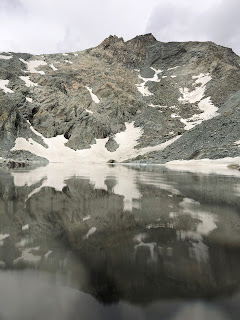 Training the next generation

I kicked off the summer season by working on the famous Jonathan Conville Memorial Trust mountaineering courses. https://www.jcmt.org.uk.

The Jonathan Conville Memorial Trust ensures young people from all walks of life, regardless of opportunity, experience the challenges and rewards of mountaineering. Through building knowledge, confidence, and ability, we train young people to safely reach their most ambitious mountaineering goals, certain that personal growth in the mountains solidifies into every other aspect of life.

The courses are aimed at young mountaineers who are coming to climb in the alps for the first time. With the intention of them  climbing on their  own afterwards. [Ie without Guides] The aim of the course  is to make sure they are able to go home alive at the end of their adventure.  The courses aim to give some key skills, but also impart as much advise as possible, on everything from which are the best weather forecast apps, to what to carry in an alpine rucksack and perhaps more impotantly what not to carry.

My three students were Janine Alexander, Alex Everest  and Ben Taylor.  After meeting on the Chossalet campsite in Argentiere [where all the alpine courses have been based since their inception in 1979] We headed up Le Brevent.  We started by looking at how to move safely on steep snow slopes and then moved onto looking at how to alpine climb using the rope safely and quickly.  We also looked at how to escape from situations which we might have " overcooked."

On the second day we drove through the Mt Blanc tunnel and took the Sky Way cable car.  From here we climbed the Aiguille Marbree.  We finished the afternoon looking at crevasse rescue scenarios and setting up pulley systems.  The key take home point is that firstly it is better not to fall into a crevasse by employing best practise techniques and secondly it is virtually impossible to safely hoist some one out of a crevasse if you are the sole person left on the surface.

On our third day we negotiated the enormous queues at the Aiguille du Midi [by having pre booked our cabin slots ] and went and climbed Point Lachenal.  This gave us plenty of opportunity to learn the fundamentals of cramponing.  After all if you dont know how to climb on crampons the rest of your alpine climbing career is going to be somewhat compromised.

This was also a good place to introduce the notion of the alpine walking pace.  Ie very slow and steady.  The team being in their very early twenties were sceptical about the need to go so slowly, but by the time they had walked back up the Midi ridge in sweltering heat and had overtaken every other team, they were a littel more convinced.

Posted by Mark Seaton at 7:43 pm No comments: