I spent 17 consecutive years skiing in Klosters with the famous Flying Grannies. [The FG's]
http://www.markseaton.com/?s=flying+grannies . I got to know the off piste runs very well .

Sadly the last time I skied with the group was 2008.  Since then they have either died or key bits of their bodies have broken.  Still they went on into their late 70's.
So I was very excited to return with Chris Dovell and Lia Heisters.  Yet like most of the best trips it got off to an inauspicious start.
We left Chamonix in the lashing rain and endured it for the entire  5 hour ,500 km journey.

On the Monday it was not actually raining but it was warm.  So warm that the avalanche risk was 4 out of 5.  [The Swiss virtually never post a risk 5 unless there is a threat to buildings and infrastructure.]  We contented our selves by skiing around the resort , which is colossal.  Then in the afternoon the temperature dropped dramatically and it began to snow.

Tuesday: Every lift  was more or less shut .  The only area that was open was called the Rinerhorn.  A good  off-piste area but quite an undertaking  to get there, especially when the railway had been closed by wind blown trees across the line.
It kept us entertained  until it closed around us because of the strong wind.  We returned to Klosters stopping for a sandwich in Davos.
It was snowing hard. So much so if, Donald had still been in town he might have said

"How can you have global warming if it's snowing like this ?"

It dumped all night and the same snow-plough spent its entire evening  out side my window making loud scrapping noises mixed with lots of beeping each time it reversed.

Wednesday, eventually morning arrived.  We now had plenty of snow.  In fact too much , because all the lifts were again closed. Yet at about 9.15 Klosters opened the Gotschna cable car to its middle station.
From the 17 years with the Flying Grannies I knew that in these snow conditions this is all you need for skiing heaven.  We were off for some world-class powder skiing through the trees.  Our first run was back  down under the line of the cable  car.  Absolute perfection.  Then the top section opened. We headed up but although it was [euphemistically] atmospheric it was too windy to get really good off-piste skiing so we instead skied down the Schwarzeealp all the way back into Klosters and got some sublime pitches through the trees.

Next we went back up to the middle station and this time  cut out skiers left and skied the trees , ending up on the Klosters home run piste.  Here we put the skins on for about 10 minutes before attacking the meadows which head down to Sernus where we picked up the Post Bus back to Klosters, where we did a final lap from the Gotschna middle station.
Thursday.  We now had marvellous snow and beautiful weather .  Every single turn was perfect.    Huge  descents from the top of the Weissfluhgipfel via the famous "Direttissima" run followed by powder pillows in the meadows. It was exceptional.


Friday .   Change of venue.  The other side of Klosters is home to Madrisa ski station.  It always took me a bit of negotiation to get the  FG's to ski there because  it was far too modern for them and it wasn't really Klosters.  [It opened in 1964]

Yet it has impressive skiing terrain.  Chris, Lia and I headed there and hit the sweet spot.  We skied line after line from the lift system and then in the afternoon headed down the long remote run to St Antonien.  Before we skied the run, I wanted to get the views of the local avalanche experts and dropped into the piste patrol office to see what they thought.  After all there were virtually  no tracks in the valley.

I had skied the route many times, the last time, rather poignantly, [although I didn't know it at the time]  was to be  the valedictory  run with the FG's before they signed off. - [Not a bad place to sign off either] Back again under different circumstances , the run was perfection.

Saturday. Inevitably the resort was busy.  Despite a sharpish start we were still in a queue for the Gotschana cable car.  But once we were through that we worked our way once again to the to off the Weissflugfel.  We dropped off the back and were instantly alone. 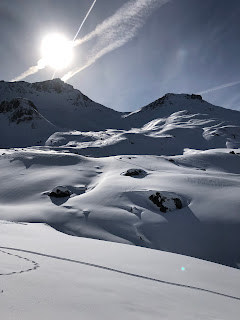 Klosters has a reputation as being a place for "posh wooley-heads" and royalty to hang out. But  the terrain we were in would have impressed anyone from the "extreme fat ski brigade."

Not sublime turns to start with , but in any other resort, after 3 days of sun they would have made your holiday.  Further down the skiing was once again perfection.  In the afternoon we skied the classic Gmeinboden off-piste run from the top of the Seetali drag lift.  Again only quite good at the top but flawless the lower we skied.

So may be the moral of the story is you need bad weather if you want good snow, yet Klosters delivered again.