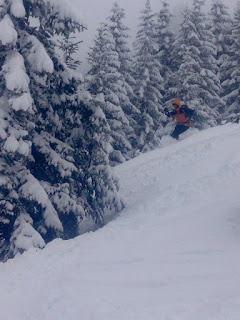 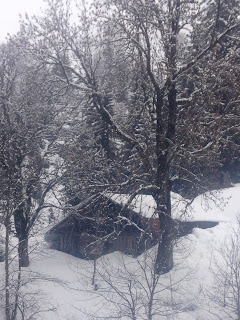 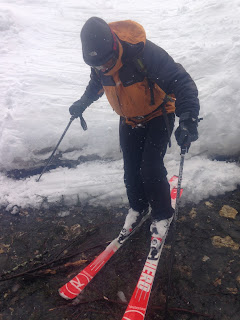 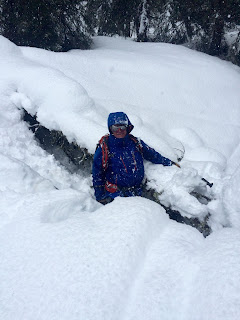 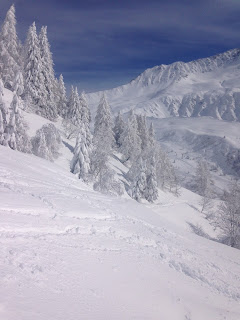 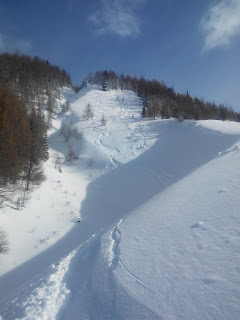 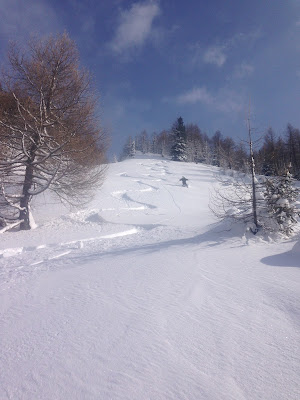 Posted by Mark Seaton at 8:41 pm No comments: 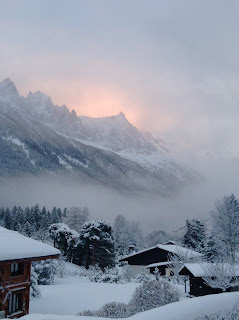 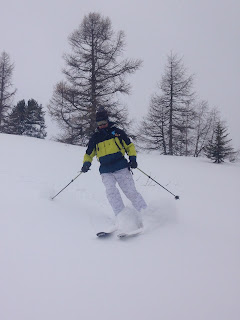 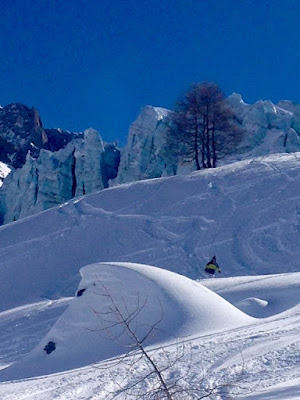 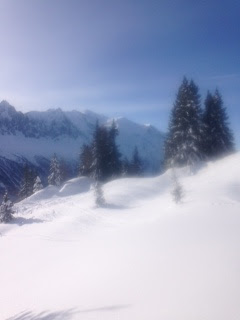 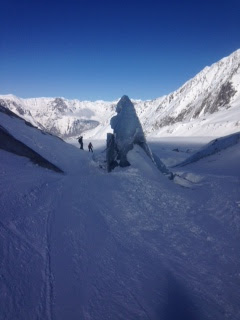 Posted by Mark Seaton at 2:39 pm No comments:

Off piste and personal... with Mark Seaton, mountain guide

Short interview with me by Francesca White , journalist for the Tatler writing a piece for Wimbledon Clinics blog.

Off piste and personal... with Mark Seaton, mountain guide
Posted by Mark Seaton at 9:40 am No comments:

Just going out side and I may be some time.

Anyone who has ever spent time in the mountains will have at some stage mimicked captain Oates famous last words Yet it is not often that it is said in the company of a direct descendant of Robert Falcon Scott - Scott of the Antarctic.


It is a standard joke between Lucy-Kate Hunt [Scotts great granddaughter] and her good friend Catherine Lewis. Catherine never misses an opportunity to weave the quote into the days ski-touring adventures.

The long standing plan was for us to drive to Gressoney , stay two nights in the very comfortable Orestes Hütte, hopefully climb the Vincent Pyramid and take advantage of the wonderful off-piste the Monte-Rosa ski area has to offer.

The plan fell apart when we arrived in the car park at Staffel. There was no snow. Just ribbons of white down some pistes. Added to which the whole resort had shut down because it was so windy.

PLAN B - So often in this game it is about thinking up a solution quickly. We drove to La Thuile and made arrangements to stay at the Maison de la Neige. This involves taking the lift out of the village and then skiing down to the Hotel which is situated on the [closed] road to the Petit St Bernard road.
The first lift was open yet by the time we were ready to take the second lift, the wind had increased and it closed in front of us. Added to which the pisteurs closed the piste to the hotel.

Eventually I tracked down the head Pisteur [who was also a Mountain Guide] and he gave me permission to use the closed piste. A very atmospheric ski took us to the fabulous hotel and a very cosy night. [The hotel has an excellent cellar too] 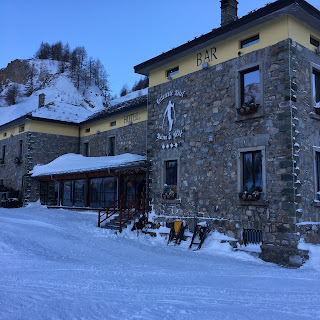 The next day the wind had dropped and the sky was crystal clear. We left the hotel at 8.30am and skied down the road and through the meadows back to the car . A short drive to Arpy where we skinned up to the summit of Punte Crocce. 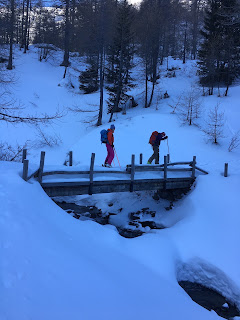 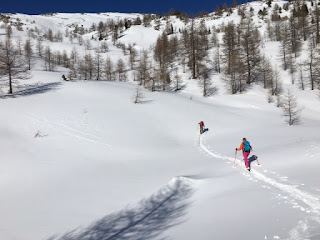 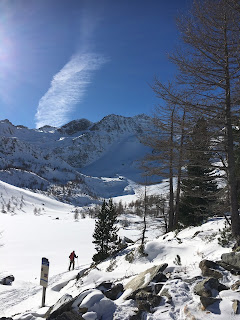 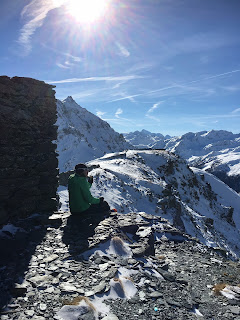 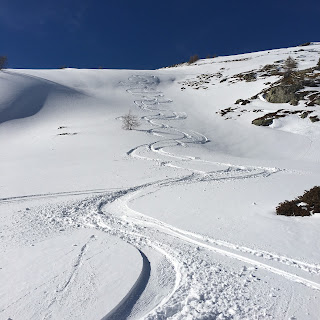 Saturday we were back in Chamonix. It snowed over night, but was clear and sunny. I had mixed feelings about doing the Crochue /Berard ski tour because although it is fantastic , it is also arguably the most popular day tour in the world.

In fact no matter how bad or in experienced you may be as a ski-tourer you can be certain that there will be someone worse than you. AND indeed there was! 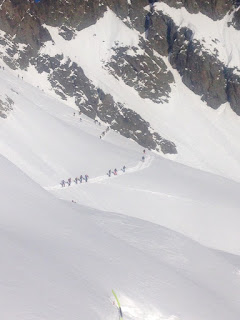 It was busy but after the first col eveyone fanned out and we found ourselves alone looking back up at the magical descent of the Berard Vallee. 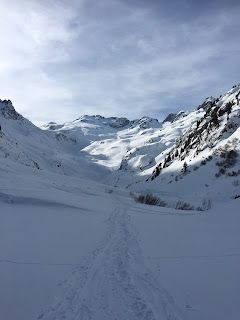 The ski down was some of the best skiing of the season.

Posted by Mark Seaton at 9:00 pm No comments:

Season continues to be weird. One minute it promises to get really good with lots of snow , then it starts raining again. The key to getting good off-piste skiing is to be flexible and mobile.
Reuben and Fiona joined me for 4 days .

On the Tuesday we skied off piste off the back of Le Tour . 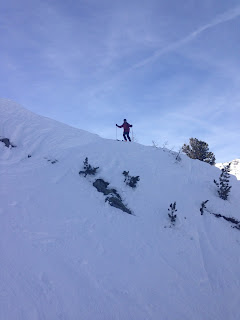 Wednesday we drove through the Mt Blanc tunnel , took the new Sky Way lift and skinned up to the Col D'Entreves . A particularly memorable lunch for Reuben & Fiona's 42nd wedding anniversary. 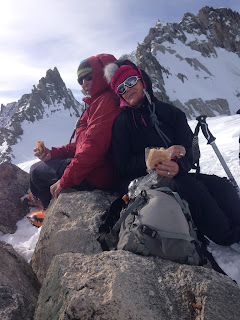 On the Thursday we went to Courmayeur skied to a very late lunch at the Plan Checrouit where we we duly entertained by the mad Anna.

On Friday we skied at Les Grands Montets which was above the clouds and very stunning. 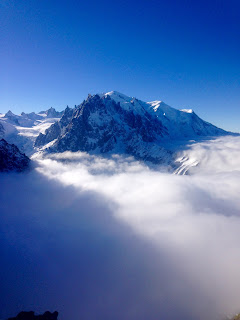 Posted by Mark Seaton at 2:46 pm No comments: