The winter Season so Far


This season our eldest daughter, Andrea started skiing before I did even though she is at University in the UK. She went to Val Thorens, to captain the Varsity women's ski team to victory. In addition, she won the Giant Slalom and came second in the Slalom.

For early season skiing, Val Thorens is often the best bet because at 2300 meters it is the highest ski resort in Europe.  Indeed, the Vanoise received a lot more early snow than the Haute-Savoie and  Chamonix. Here the resort was slow to open and in order to wake up my ski legs it was necessary to go to Courmayeur where the conditions on and off the piste were excellent.

Although Andrea is now qualified to teach skiing in France and she has started on the long road to become  Internationally qualified.  What this means is that she has to pass the Eurotest which is a Giant Slalom Race.  She thought she should at least go and see how much work she needed to do to pass, by entering the first qualification race of the season in  in Alpe d'Huez.  I decided to go with her because it was an opportunity to explore a new area.

I now know that Alpe d'Huez and Les Deux Alpes are not the same resort badly pronounced, but in fact two distinct resorts facing each other across a valley. We drove from Chamonix in about three and half hours and stayed in a quirky trendy hotel, Les Grandes Rousses, which Andrea had managed to get us a good deal on.

It was quirky because the we had to share our bedroom with a meter-high rainbow-coloured polar bear which was someones good idea of interior design.

Needless to say the weather the next day was awful.  A blind man galloping by on a horse would have known it was not safe to run an Elite ski race, but Andrea still had to turn up, sign on and get her race bib, all at the rather grim hour of 7.45hrs.

The race was rescheduled for 12.00hrs the next day.  It snowed all afternoon and then it finally started to clear in the early evening.
The next day the weather was stellar. Andrea did her two runs but missed the qualification time by 0.4 of a second.  She at least knows it is attainable.

Next, our middle daughter, Florence, returned from her first term at University in the UK.  She too wants to qualify as a Ski Instructor having passed the entry exam last year known as the " Test Technique", this is as it might suggest a test of your technique.  The next stage for her will be the 10 day course known as the "Cycle Préparatoire."  The only snag in this plan is that as a Ski Instructor you also need to be able to snowboard and teach snowboarding. Florence therefore needed to learn to snowboard.  She set off to do this with no real plan but plenty of determination. After subjecting herself to mild concussion she lay down to reflect on what she should do next.
So with a day off to recover, Florence then asked one of her friends to give her a few pointers. We asked who this might be and if she is any good at the snowboarding?
She's my school friend and she is the Freeride World Tour Junior Champion, Anna Martinez. Progress was rapid but it allows the opportunity to roll out the well worn joke :

The bad weather had resulted in a good dump of snow and the conditions became good. The best
off-piste skiing in the Chamonix Valley is currently at La Flégère where there is a good depth of quality snow : 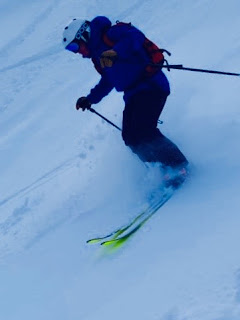 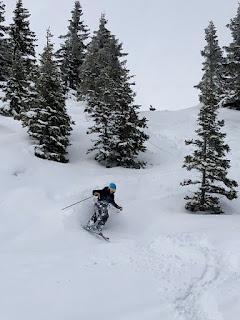 Christmas Day was wonderful.  The skiing at Les Grands Montets was excellent. After the unfortunate burning down of the lift station, access to the glacier is by an hour's skin from the top of the Herse chairlift, so slightly less time than standing in the horrendous lift queue. The big plus is you arrive in a trackless pristine wilderness.

So all in all conditions are quite well set up.  Happy New Year.

PS ; Andrea is a great Ski Instructor and  can Snowboard . 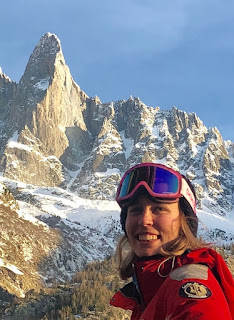 Posted by Mark Seaton at 8:06 pm No comments: